A Poem by David Mohan 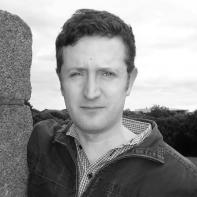 David Mohan is a poet and short story writer based in Dublin, Ireland. His poetry has been published in The Cincinnati Review, Spoon River Poetry Review, Ninth Letter, Stirring, Corium Magazine, New Madrid Journal, New World Writing, PANK and Dialogist. His poetry has been nominated for The Pushcart Prize.

He is a portable scarecrow,
given to lying in wheat fields,
a scatter of crumbs on his chest.

His kiss is like a house sparrow’s dart,
frantic against a bedroom’s glass,
almost breaking its wings to escape.

On early mornings he will listen
as distant chimes of mating knell
adulteries along his row;

at dusk he kneels—San Francesco
testing the limit of patience
that lures a soul from its circuit.

When, years later, they call him home,
he flaps his arms around the yard,
lost in eighty’s flightless take off.