A Poem by Natalie Giarratano 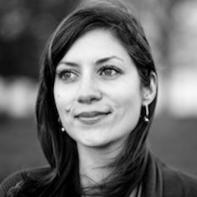 Natalie Giarratano is the author of two full-length poetry collections—Big Thicket Blues (Sundress Publications) and Leaving Clean, winner of the 2013 Liam Rector First Book Prize in Poetry (Briery Creek Press). Her poems have appeared or are forthcoming in Waxwing, Mississippi Review, McNeese Review, and Whale Road Review, among others. She edits and lives in Fort Collins, Colorado, and was the poet laureate of the city from 2018 – 2020.

By Lucky What I Mean Is White

Every sound is relevant—the season of punk and disco into which some
of us were born; the new quiver of my 90-year-old grandmother’s voice;
my inner monologue of You are so lucky to make it this long (by lucky
what I mean is White) to the woman within whom part of me once
existed. I come across the term “weathering”—a kind of bodily erosion
due to chronic stressors (i.e., systemic racism, poverty)—as I research why
Black women are dying in pregnancy and childbirth four times more often
than White women. Because I’m White, a nurse allowed me to gouge at her
hips during an epidural, specialists worked hard to save most of my brain
and body and later mistook my White anger (at their medical fuckup)
for depression, and the neonatal nurses offered pumps and advice
to make sure I was brimming with milk. I’ve never had to worry about
forced sterilization. Yet, a million eggs are forming inside the ovaries
of a fetus forming inside of another’s body—already weathering.

Tongues on Fire with His Name

In the rural South the mouths of rivers still gape like rippling black
holes, slick with oil and garbage, mechanically pumping stories out
into the gulf to make White people feel better. We’ve never wanted
to know the real languages of these waters, to remember the syllables
of those who’ve been swallowed up by our violence, to think about all
the bones found on searches for missing White women or children.
Come over here: We will light our tongues on fire with Emmett Till’s
name until the words between our burnt White mouths become
unearthed coffins. Go ahead and pry one open. Mamie demanded
that her son’s mutilation should move us through the glass. But
White people had already deemed a 14-year-old dangerous—we have
made this up as an excuse to destroy and avoid scrutiny. O, slick eels
burrowing down into the river’s sloppy sediment, whether we choose
to look or not, our ghosts are forever fastened on to our skin.