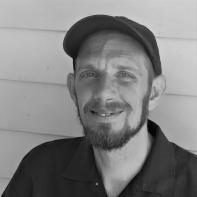 Adrian L. Cook is a professor of humanities and English at Tarrant County College in Fort Worth, TX. An Oklahoma native, and member of the Cherokee Nation, Dr. Cook’s academic work focuses on the evolution of storytelling from myth to meme. He is also a professional percussionist and lyricist for the Americana bands Shotgun Friday and The Bodarks. His drama, poetry, and fiction have been published in Sojourn, New Plans Review, borrowed solace, 365 Tomorrows, and on the 50-Word Story website. Dr. Cook lives in Dallas, TX with his wife, Cristee, their two children, and a host of pets.

I had the procedure two weeks ago. It worked like a charm, literally. I’m White now. White for two weeks, and ironically, I’ll be dead as soon as we reach. . .wherever it is the War Party is taking me. Turns out the tales are true—Trickster will have his day.

I heard about the Trickster Technique at the Talequah powwow a couple years ago, right before things got crazy. I was surprised it was an In’din that made the breakthrough. Say what you want about equal opportunity employment, most people see the last name Tiger or Harjo or Bear on a resume, they still assume you went to some low rent tribal school and got your grad degree because of a quota. It must have been some trick for a guy named Charlie Eagle to score a gig with NanoCorp. (Yeah, that NanoCorp.) And their commercial products, that ain’t the half of it. Eagle made off with unheard of nanotech. The kind that can eradicate cancer. Or change your ethnicity.

I would be surprised that he didn’t try to make a mint selling Trickster to all the Black folks, but when shit gets real, you gotta look out for your own, right? You can’t take a chance on deep tech getting appropriated, or outright stolen. Eagle knew he had to save it for when they came for us, which of course, they eventually did. Once we were back on the radar.

We know that when White people figure out how to legally exterminate people they don’t consider people, it doesn’t take them long to get the job done. Once shooting “suspicious Black men” was basically sanctioned, White folks started calling the cops on just about anyone darker than a mocha cappuccino. Then came the riots. They spread. Bam! Probable cause. Patrols. Black genocide, once and for all. That’s when we stopped doing Red Earth and pan-tribal powwows, initiated blood-quantum scans and made our get-togethers private. This story is in our blood. We knew where it was headed.

They took out the Latinix next. ICE was officially militarized and expanded its employees by 1,200%, started a damn junior program. That took care of everybody else.

Except us. We’re indigenous. We didn’t immigrate from anywhere. And we’d already been assimilated, impoverished, and crammed into reservations. So they had to start hunting us on the DL. Which, of course, they are. We can keep to ourselves, but we can’t hide our skin. We have to change it.

I’m skeptical about the procedure, but desperate times….

My hookup to Charlie Eagle is a woman named Selma. A woman of about 40, she is understated beautiful, full-blood if she’s a drop. She gives me the info and I memorize it (no paper trail or text trail), quotes the price (which is all my savings plus some), and arranges a rendezvous.

I arrive at the Mekusukey Mission at dusk. This bruiser of a guy does the blood-quantum scan. 92%. I’m in. (Like I said; take care of your own.) Charlie Eagle’s there with a straight up shaman. The shaman says, “Trickster will disguise you; protect you from the White man. Will you pay the price?” I assume he’s talking about the money, so I hand over the cash and take a seat.

Sage is lit and the shaman starts in. Drums, rattles, chants. It all registers as somehow familiar.

Now for the science. Eagle takes out the nanobot capsule and places it in my mouth. The shaman gives me something to help take it down. I drink. It tastes like the Earth itself—dirt and sun, grass and water, fire and snow.

Eagle looks at me hard, looks at his display. He makes a few calibrations on his tablet, and the ceremony begins.

I feel my brain—what?—tingle? Pulse? Dissolve and reassemble? The four directions collapse into singularity. The room and everyone in it moves in stop-time. Then double time. I’m not sure what’s magic and what’s tech. Maybe they are one and the same.

The world slams back into order. Trickster has dropped me back into real time. It’s been three hours. I thought it was maybe fifteen minutes. However long it’s been, when it’s over I’m White.

Eagle pulls a full-length mirror over. The reflection is me/not-me. I touch my face with slow, shaking fingers as I stare at the reconstructed features through sky-blue eyes. There’s more. I don’t feel the same. The shaman’s lingering chants are foreign.

Next morning, when I walk into the Circle K, I realize that no one is watching me. I feel no fear, no shame. I grab a six pack of beer and the clerk barely looks up from the show on his palm projector when he rings me up. He doesn’t even ask for my new I.D. (included in Eagle’s fee). 150 years of judgment has vanished.

As I exit, I nod my head, say “’sup” to a pretty auburn-haired girl I’ve seen several times around town. This time she doesn’t scowl or speed away. She smiles and lowers her head a few degrees while raising her eyes to meet my big blues, and she gives a little wave. I immediately love being White.

It never occurs to me that one of those miracle nanos could be a tracking device.

They picked me up on Old 99, just outside Seminole. We’ve got to be in Wewoka by now. Or Tecumseh. I don’t know which direction we’re headed. My internal compass must have been erased as well.

The ’22 Ford Transit 250 hits a dirt road, the feel of the ruts and the sound of gravel unmistakable. My arms and legs are zip-tied and I’m tumbling around loose. The driver takes his turns hard, tossing me like a limp salmon every time he does. As I smack into the cold hard wheelhouse for the umpteenth time, from the front I hear the faint crackle of an old CB. (Nobody’s monitoring those anymore.)”This is Crow. We’ve got Blood Traitor Eighteen-nine-zero with an ETA of ten minutes.”

“Copy that, Crow. We’ve got Red in waiting.”

“Glad to hear it, Coyote. Dance the circle down.”

When the van comes to a stop, the back is thrown open and I’m dragged out by two Indians in full fancy dance garb, only they’re strapped with AR-15s. I am cut loose and marched into a familiar arena. We are in Wewoka. (At least I had my distance right.) Charley Eagle is there. And the shaman. And Selma. And the auburn-haired girl.

Eagle and the shaman appear to be the emcees of this little powwow, Selma a celebrated accomplice. The girl is a prisoner. She pleads with those eyes of hers for help, but I’ve got nothing. Eagle speaks.

“We have heard the wisdom of Wovoka, prophet of the Next World, who foretold a time when the White man. . .” A pause. He fixes on Red, “. . .and woman will be swallowed up by the Earth; a time when the First Nation will rise again to inhabit the Fifth World alone.” He turns to me. “You see now—you and all who pay the price—what you have denied.”

Will you pay the price?

I hear drumming in the distance, far away at first, growing in intensity, getting closer. It sounds foreign. I do not feel Indian. I feel fear. I feel shame. Shadows crest the hill.

From behind us, gunfire, screams, and tears as hundreds of pale-skinned prisoners (many no doubt as newly White as I) walk a trail toward us. Timid and broken, they are urged forward at gunpoint.

The shadows have crested the hill. They are people now—a perfect circle of people dancing around and moving forward at the same time. I know I should know what they are dancing but cannot bring it to consciousness. Eagle sees my struggle and supplies the answer.

“Four days long have they danced, and into the fifth. And now,” he begins, but the earth below us trembles, and it’s all I can hear, all I can feel.

The ground becomes soft. The dancers are here.

It liquefies, and we sink. The drums are deafening.

The Ghost Dance surrounds us as the flame of subterranean fire licks our feet. Fifty captives drop out of sight in front of us. Fifty more screams behind us go silent. To the left, they drop. To the right, a hundred more fall.

Only I and the auburn-haired girl remain. She trembles in a seizure-like fit, our eyes locked. She seethes, tossing spit from gritted teeth. 500 years of hatred.

And the Earth swallows us up.

‹ fiction up "the yin world of love" by Khanh Ha ›