A Poem by Marcy Rae Henry 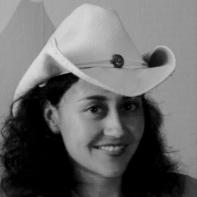 Marcy Rae Henry is a Latina born and raised in Mexican-America/The Borderlands. Her writing appears or is forthcoming in Columbia Review, Epiphany, Hobart, Cathexis Northwest, Black Coffee Review and Writers Resist, among others. Her work has received a Chicago Community Arts Assistance Grant and an Illinois Arts Council Fellowship and has been shortlisted for the Fish Short Memoir Prize and longlisted for the Disquiet Literary Prize. One of her stories received Honorable Mention in the New Millennium Writing Awards and another was a semi-finalist in the American Short(er) Fiction Contest. DoubleCross Press will publish a chapbook of poems.

You can’t really drink out of a cactus

Would Hollywood have us laughing as we flashed forward
to my prima’s husband snapping móle-covered fingers at her
demanding: traeme otra tortilla

Would it show her telling him: get on up—y traeme una chela
with música swelling in the background

‹ A Poem by Madari Pendas up A Poem by Quintin Collins ›