"The Two Tryers" by Siamak Vossoughi 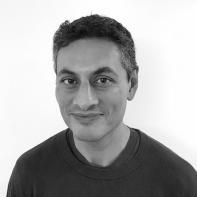 Siamak Vossoughi is a writer living in Seattle. He has had stories published in various journals and his first collection, Better Than War, received a 2014 Flannery O'Connor Award for Short Fiction. His second collection, A Sense of the Whole, received the 2019 Orison Fiction Prize.

Hector and Gabriela drove from Phoenix to Denver, trying the whole way. They tried together and they tried alone. They tried in a way that took in the past, that took in all the trying of the past, and they each wondered if there was a trying that could even out the past, that could even out Hector's father and mother and uncles and first wife, all of whom were also tryers when Hector was at his most forgiving, and Gabriela's mother and oldest son and first husband, all of whom she could concede were also tryers, though not her father, she did not believe that her father was a tryer, and Hector quietly wondered if the two of them could ever really try together before Gabriela admitted that her father was also a tryer.

They tried all through Arizona and New Mexico and Colorado. They tried with a memory of the land, of the land and the desert and the sun. And that was one thing they knew they had. There were times when each of them thought that their trying lined up directly with the trying of the land, with the history of the land. At those times they each wondered how in the hell it could be that their two tryings wouldn't line up with each other. As if by some transitive property they could each align their trying with that of the land and the people of the land so exactly that they could align with each other. Hector remembered how beautiful and natural Gabriela's trying had looked when they'd first met, a junior high school principal whose trying came out toward children and their education, and Gabriela remembered how magnificent and purposeful Hector's trying had looked, a university professor whose trying came out toward young adults and their education. They knew that kind of trying, they were champions of that trying, and they thought that it had prepared them for the other trying, for the trying that meant they had to be the man and woman they were and the children as well. It was a trying they couldn't understand because they had to move backwards and forwards at once, and they had each been moving in one direction for a long time.

It was terrible to know the other person was trying as they drove and to wonder if it was enough. What else was there but trying? What could be after that? They were not dreamy anymore. They were believers in trying. And they were trying now with an eye to the ultimate trying, which was marriage.

Still, when did love become the thing when you were around the person with whom you did not have to try, they wondered. And yet there was no one around whom Gabriela would rather try than Hector, and there was no one around whom Hector would rather try than Gabriela. Truth to tell, neither of them knew what it was anymore to not try, and it occurred to both of them that maybe their tryings were both simply too fine, too artistic and intangible. How could two great artists ever expect their works of art to match, to form some third masterpiece together? Maybe it was too much to ask. It was easy at first because two artists had each found their best audience. Maybe that was all it should be. And yet their tryings were never meant to sit by themselves, to be admired from afar. They were meant to be known intimately, to mingle and recognize one another in the night, until it did not feel like trying anymore.

Who was it who could ever try and not try at once, they wondered. They weren't the trees that stood along the highway, or the birds that sat in them, or the little rodents the birds were waiting for. They could try and not try at once by finding what was between them. Hector and Gabriela marveled at their decisiveness. They wondered if they should pick one tree or one bird or one rodent and marvel together. That could do it, couldn't it? That had done it in their youth. But there was more than marveling now. In those days they took every bit of life from the world and made it their own. Now they knew there was a price for what they took. The world took back just the same, and so two tryers driving through the American southwest trembled to be holding the other person's trying as well, knowing that the holding gave the world even more of a chance to take back, and even as they knew that the name for the feeling was love, naming it did not help. And there was a sadness and an anger in the car then because the name of love was supposed to help, and the two tryers each asked just how much trying was expected of them, and in their lowest moments they each thought that if you had to try without love and you had to try with love, why not stick to the trying that you were an expert at? Why not try with some nice clean boundaries to your trying? Rather than a trying that woke up each morning to a territory the size of the universe? And at the thought of it, they each didn't know whether to laugh or to cry at the universe they each saw in the other, and they felt thankful that at the very least they were moving, traveling through the universe themselves, because it would probably be too much to be traveling so far inside without traveling outside, and they each looked out the window and took solace in the land as it sped past.

When the fight started, it was a small thing that did it. Too small to mention. But they wanted to see if a fight was where not trying lay. In that sense, it was a big thing that did it. Look at how hard I have been trying. That was the beginning, middle, and end of the fight. And they saw as they fought that this thing could be said in words, it could be told in stories, stories that could wind around each other, and they wondered if it was the Americans in them that made them think of their trying as a commodity, to be measured and compared, and made it hard for the Mexicans in them to remember that their trying already belonged to one another before anything had even happened yet, before they had even met. Which was nice to think for a while until they remembered that their Mexican mothers and fathers certainly hadn't known what to do with their trying. And it almost seemed like for a man and a woman to know what to do with their trying meant they had to renounce the whole history of the human race. It meant they had to be unspeakably lonely, that they had to ask the world of one another. Because you couldn't catch a glimpse of all the world's trying in the way that two people in love did without also seeing that they still did not know, they still did not know what to do with their trying. Love was just an invitation to join the not-knowers. After all that effort, that was all it was. And they both felt how a fight was a chance to take on the look of knowing, to take on the sound and appearance of it, and the look of it was the next best thing. They were both great approximators of knowing as they fought, disregarding the trees and birds and rodents as they did because what did they know of the struggle of human knowledge?

They looked out the window when the fight was over and saw that the world had survived, and they remembered a time in their youths when its survival was a re-discovery of love. When they would remember how small they were and how big the world was, and the difference in size would bring them together, reaffirming their need for each other. But they were two tryers now, they were two of the greatest tryers the world had ever seen, and it did not come as a surprise that the world survived. It had survived many times by now, more than they ever would have guessed in their youth. And Hector and Gabriela felt caught because the world had survived just like they knew it would. The fight was terrible and awful, but they had been two tryers for too long now to see the world anew, and they thought that at the very least that would make the fight less terrible and awful, but if you still had all the pain and sorrow, only now the recovery was all on your own, what could you do with that? What could a man and a woman possibly make from that?

"What are we going to do?" Gabriela said, about two hours away from Denver.

"Maybe we should get married.”

"I don't know if we should get married, Gabriela.”

She began to cry.

There was not time enough in the world to tell each other of their trying. There was not time enough in the eleven hours they had driven so far from Phoenix to even scratch the surface. They wondered if there were tryers in the world who were so good at trying that they could not tell of it anymore, if it was like trying to tell the story of their right arm, or something else that had been with them from birth. It was tragic if it was so. And there was a moment then when they each felt themselves on the cusp of turning to the other and saying, Look, I've seen your trying the whole way. From the moment we left Phoenix, I've looked out the window and seen your trying, and in the two hours we have left to Denver, I expect I'll look out the window and see the same. You should know that. You should know that I've seen it the whole way.

And they drove the last two hours to Denver on the cusp of it, seeing the signs for Denver as they approached it, telling themselves that the important thing about driving to Denver was reaching their destination, a city where they had once spoken of getting married, and as the signs for Denver increased, they felt themselves losing the cusp of it, till they both felt that if they ignored the signs and bypassed the city and kept driving, it would be so easy, it would be so easy to say to the other that they had looked out the window and seen their trying the whole way. Somehow everything beyond Denver was an open road, and out there they would have the freedom to say it, to say it laughingly and caressingly and in all the ways of love. Just one mile out of the city even, they thought. That was all it would take.

‹ "THE GARDEN OF POMEGRANATES" by Ravibala Shenoy up interviews ›