A Poem by Madari Pendas 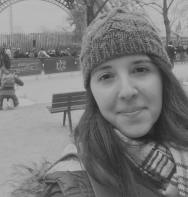 Madari Pendas is a Cuban-American writer, painter, and poet living in Miami. Her works focus on the ways Latinidad intersects with other salient parts of her identity. She has received literary awards from Florida International University in the categories of fiction, poetry, and creative nonfiction. Her work has appeared in The Acentos Review, Pank Magazine, The New Tropic, Lambda Literary, Jai-Alai Books, Politicsay, The Beacon, The Courtship of Winds, Saudade County Press, WLRN (Miami's NPR affiliate), and The Miami New Times, among others. She is currently a graduate student at Florida International University.

What is blackness now to you,
but a flash of an incisor
by your aggressively white mother,
and loathful dark father,
Who apologizes
for bankrupting your gene pool.

Yet calls you 'negra' when he rages,
He speaks as if you had a role in your creation.
You also inherit his distaste, his hate,
Sometimes he says 'negla'
Aping the way you struggle with 'Rs.'
His tongue untwining behind his teeth.

Your black-black abuela is cut from photos,
Your nose is afilado, straightened by your mother,
whose hands squeeze & compress the bridge of your nose;
Your hair is boiled in chamomile,
To aclara, to lighten, to whiten,
The sweet smell distracts from the burn.

What is blackness but a shade, a tint,
Diminished, sieved out,
Tienes que mejorar la raza,
"You have to improve the race,"
A directive from the island,
Mami winces when she sees the black boy you like.

Aclara also means to elucidate, to make clear;
You can mejorar la raza,
By rejecting the Malinche in you,
By repudiating the mouths that gnaw at your flesh,
You must make clear & teach to those
Who don't see the blood on the sugarcane stalk.