"Soldier in an Airport" by Theodore Wheeler 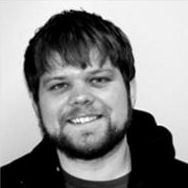 Theodore Wheeler's fiction has been featured in Boulevard, Fugue, GSU Review, and is forthcoming in the 2009 edition of Best New American Voices. He has been a Jakobson scholar at the Wesleyan Writers Conference, a graduate fellow at Creighton University, and has recently won Boulevard's Short Fiction Contest for Emerging Writers. Wheeler lives in Omaha with his wife Nicole and daughter Madeleine, is finishing a collection of short fiction, and has begun work on a novel.

Soldier in an Airport

I was sitting in the Atlanta airport reading a discarded newspaper when a National Guardsman sat next to me in the terminal. I was watching a movie, but moved my laptop so he could sit down. There were other open seats, but no one else offered one, so he sat next to me. He was wearing a blue backpack and I couldn't help but think that it looked very out of place hanging from his camouflaged shoulders. He was pale and freshly shaved, a little sweaty. His skin like plastic. The kid looked nervous. He was alone. There were other guardsmen in the airport, but he was the only one at this gate. We were probably about the same age, but his nerves made him look younger. I was there on business, though, in one of my new suits. This was for my first job after college, for the investment firm in Chicago. It occurred to me that this guy could have been someone I went to high school with. The southern version of someone I once knew.

Pulling my headphones off, I told the guardsman that my grandpa fought in World War II.

"His P-51 Mustang was shot down behind German lines. Those night missions were hell." I talked to him like I were John Wayne, as if he couldn't tell the difference. I was having a hard time imagining him as a hardened killer. He sat with his ankles crossed and smiled at me politely while he listened.

"Grandpa had to crash land his plane in a wheat field," I continued. "Can you imagine that? Some kid pilot, a boy wonder, really, being shipped from a farm in Nebraska just so he can crash a fighter into a field in Germany. It's a crazy world."

The National Guardsman asked me if my grandpa made it out okay.

"Oh, sure he did. I wouldn't be here if he didn't. That's the truth of it, too. He crashed in the wheat, but was too stupid to get hurt. That's what grandma always told us anyway. He walked all night back across enemy lines, safe-and-sound. He must have been quite a sight, walking in the dark like that. Sleeping Germans on the side of the road. Seems like it was a wonderful war. And those boys really looked sharp in those flight suits, though, didn't they?"

"My grandpa threw flames at Japs, on Iwo Jima."

I wanted to put my headphones back on, but he kept talking about the things his grandfather saw in the war. Pretty soon he'd have his own stories to tell, I supposed, but I didn't want to listen to him. In three months he could be dead, but I would be on the road, or in my third floor office, pitching ideas that weren't my own. I would be dreaming of a night club.

This guardsman, it was so damn tough to talk to him. He just rambled on about nothing. A guy my age, waiting for his plane to take him off to war. Most people, they didn't care to even look at the poor bastard.

This was a commercial airline terminal. Where some of us worked and breathed.

‹ "The Last Maharajan," by Susan Wingate up "A History of Himself" by T.R. Healy ›