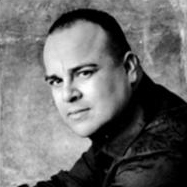 Rigoberto Gonzlez is the author of seven books, most recently of the memoir, Butterfly Boy: Memories of a Chicano Mariposa, winner of the American Book Award from the Before Columbus Foundation. A story collection, Men without Bliss, is forthcoming. The recipient of Guggenheim and NEA fellowships, and of various international artist residencies, he writes twice a month a Latino book column, now entering its seventh year, for the El Paso Times of Texas. He is contributing editor for Poets and Writers Magazine, on the Board of Directors of the National Book Critics Circle, on the Board of Directors of Fishouse Poems: A Poetry Archive, and on the Advisory Circle of Con Tinta, a collective of Chicano/ Latino activist writers. He lives in New York City and is Associate Professor of English at Rutgers University-Newark.

Charcoaled homunculus that only his five-fingered mothers can tame
by closing the socket to conceal his famine's glare. Still he hungers

for texture and seeks out the meat of depth, the elusive third
dimension denied him the moment he crawled into life, bastard

child of flesh and light. No wonder he's cruel, finding kinship
with the knuckle of rock, mimicking mono-stings vulgar as black flower

wasps. But even as he triumphs on walls he will bow to his mentors—
your hands. The day you smothered the baby rabbit, frightened face

expelled from the skull's asylum, your mother knew you had been pledged
to cold humanity. The sock-limp creature dropped to the tile and screeched.

No, that wasn't the dead rabbit that was you in your range of explosion:
shock, confusion, fear, and grief. What crude consolation: a changeling,

antennae-eared with a twitching transparent snout. Truth is apparent: you
won't sit on that couch again without its ghost-weight on your brutal knee.

you will always know how to squat. The bus revs its rattling engine
as it waits among the rows of her corneas. Perhaps prescience

is a female trait. Wear these other costumes next: gypsy, medium, witch.
Intuition. In family myths, your grandmother knew before marriage

that her husband would outlive her by twenty-four years. Vision in fever
during adolescent menstruation. Not hallucination, not dream as she

sat on a cyan grave, watching her children wail. She knew they were heirs
by the wilted lilies on their clothes. She knew she was dead by the smell

of trapped alcohol and salt. All corpses wiped cleaned that way. Her solace
was she'd never breast-feed any daughters. But deep inside the echoes

of the future fetus kicking, she sensed one of her sons would chromosome
a girl: O ticking talisman, O exalted seer of the sorrows yet to come.