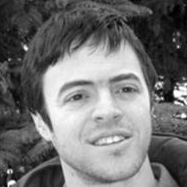 Matthew Gavin Frank is the author of Sagittarius Agitprop (forthcoming from Black Lawrence Press), and the chapbooks Four Hours to Mpumalanga (Pudding House Publications), and Aardvark (West Town Press). Recent work appears in The New Republic, Field, Epoch, Crazyhorse, Indiana Review, North American Review, Pleiades, and others. He is the recipient of an Illinois Arts Council Fellowship and an Artist's Grant to the Vermont Studio Center.

The nurse with the tattooed wrists lays
your photo in a memory box. Tissue paper

Someone should tell you, while your sister
had the hiccups, your mother could stand

only apples and peanut butter. The cafeteria
on the second floor really was horrendous.

When the computers, monitors, microphones
couldn't find your heart, even with

of the Aries. We have to soap our hands
before we touch your sister, sing her

Bruce Springsteen and Odetta, foster her taste
from the beginning. Norman says,

this is not unusual.
So many days and shunning of the in-laws,

their stupid grieving, easy acceptance of the greasy
chicken legs, coming to us now by the bucket,

forcing similes with your body,
all the dreams of twins, blanketed in wool

and skin, gifted to you as this:
a cigar box, heavy as old tobacco, heaven

as old tobacco, a grandfather you never met
lying between his wife's legs as her hair

begins to return—gray when she lost it,
regrowing as brown—

a strange youth in decrepitude, and you sleep
through it, as I may, next to my sister, wishing her

No: decrepitude
in youth.

Biology is in the organs,
she says, a bargained

huddle into one corner.
We were born here

in a circling of the body's
wagons. Dying is different, muddy,

its thin film colder, a sheet
of butter over too much bread—in shivering feet

that betrays you, feeds you
then eats you

alive. It allows so many boys
to unbutton their shirts, the joy

of cloth swinging open has its own
ballad, like a glass cabinet, the mown

topography of such fertile soil.
Together, we bring to a boil

its descending melodic contour.
Lipstick, in such cases, is a bore,

she says, poorly applied,
such a red mess, messed wide,

describing the heart that once held such
responsibility inside her, the touch

her mother called gold.
But ascension, she stresses, is cold

and harp-less, only a shattered wind
forced through the holes pinned

in our lids. This is supposed to be
mercy, she clarifies, but the car key

to the spirit can't have too much fun
in a mason jar, eating into one

green leaf. At least
they went to jail, I say, but she

of the weather, winter
coming, the banter

of snow tinkling like a xylophone
struck with butter knives, a drone-

song that can't slow itself down
or go quiet, a sound