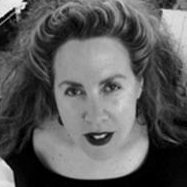 Denise Duhamel's most recent book Two and Two (University of Pittsburgh Press, 2005) is the winner of Binghamton University's Milt Kessler Book Award. She and Amy Lemmon are currently working on a series of poems with these two constraints: the stanzas are written in abba rhyme, and each poem must mention ABBA, the 70s pop group, at least once. Duhamel is an associate professor of English at Florida International University in Miami.

"Remember me?" the subject line. My college beau
was now HUGGYBEAR3@yahoo.com and a VIP at Sysco.
He'd worn tie-dye and Birks on our first tryst. "Oh
you're in a sorority?" he'd said. I'd just made a pledge, though

Back at his place, he put on Elvis Costello,
lit vanilla candles, and unwrapped his Tarot
deck and ceramic bong. "In a past life, I was a Pharoah,"
I said, showing him my spread: a sword, a wand, and a fellow

with cups, dead ringer for Benny from ABBA. "Bingo!"
he teased until I became defensive. "Hey, I belong to the AFL-CIO
and NOW." "Not bad for a girl from Ohio,"
he whispered. He was from Miami, land of flamingo-

colored hotels and retirees in low-slung Speedos.
His kisses were sweet, a mixture of grass and Gallo.
In the mornings, we would eat marshmallow
clovers and hearts, Lucky Charms inciting our libidos

and sending us back to the lumpy futon. "Presto!"
I'd say, waving the sheets, beginning my strip show
to Pink Floyd's "Dark Side of the Moon." Crypto-
karaoke was at the core of our love-manifesto,

"You Spin Me Round" by Dead or Alive. Ergo,
I traded in my shit-kickers for lime green stilettos
and my Tom Robbins novels for Brecht librettos.
Would he recognize me now? My clothes hamper so

clogged with black, my closet full of faux
Fendi and knock-off Manolo Blahniks? Apropos
or no, humming Schubert's allegro ma non troppo,
I typed "Refresh my memory!" and sipped Bordeaux.


Flirting With Disaster
by Denise Duhamel and Amy Lemmon

My perm smelled like rotten eggs every time it rained.
Forty straight days, the Weather Channel said. Boys
hauled buckets of frogs that poured from clouds, white noise
poured from AM radios, dogs had to be restrained.

My husband's divorce lawyer wrote, "The winner takes it all."
"The loser standing small," I snorted, quoting ABBA.
At the mall, I backed my used Toyota into a new Saab. A
trim, coiffed dame stepped out in Jimmy Choos, appalled

by my bumper sticker: Honk If Anything Falls Off.
She whipped out her BlackBerry and business card, turned
into the Wicked Witch of Neiman Marcus. Shoppers learned
cosmetic discipline at her Lancome counter. I tried to doff

my Auntie Anne's paper cap in deference. Elizabeth Bishop
wrote that poem about losing, an art, a disaster.
Cameron Diaz read it aloud in In Her Shoes. (The movie cast her
as smarter than the book, and sluttier.) My latest pickup

ate my last Pop Tart the morning after and never even
asked for my number. My perm began to droop
like my bloated, dirty blond Cheerios. Even my Hula Hoop
sagged, dented (I'd run over it with the Corolla). Seven-

Eleven clerks rolled their eyes as I rummaged for the right change
to pay for the burrito that had exploded in their microwave.
The peonies in my flower box turned brown, misbehaved
when I'd doused them with leftover Sanka. Deranged

neighbors rummaged through my recycle bin, looking for
gold among the Yoohoo bottles and Fruit Loops boxes.
My fortune cookie messages were full of paradoxes:
"You appreciate a place only once you've left it." "Ignore

any warnings you receive today except for this one."
"Buy Chung San noodle now." Home amid the empty
calories, I watched Barbara Walters on 20/20
interview skinny Nicole Kidman. Tomorrow's forecast? Sun.

I had to sign a release form agreeing that my image
could be distorted in the interest of news.
A computer-generated potbelly turned me into a man whose
paunch had caused a pool to overflow, drenching a scrimmage

on the playground next door. Then they superimposed
the head of Björn from ABBA onto my torso.
They Photoshopped me with wild locks, like Gregory Corso
with a perm. Apparently, this time I'd disposed

of Taffy Tabouli, a 14-fingered secretary
who could touch-type two memos, answer phones,
and pour coffee all at once. Once I was even shown
as a trim redhead surrounded by funerary

wreaths. The headline: DAVID CARUSO'S BROTHER DIES AFTER
VISITATION FROM THE GREAT CARUSO. Speaking of opera,
Weekly World News once claimed Deepak Chopra
was the reincarnation of Maria Callas. Disaster

struck when Onassis left her for Jackie.
Callas freaked, went completely ayur-vedic.
Weekly World News cast me as Maria's maniac
guru who gave her an overdose of bibhitaki

after she'd signed over everything to him in her will.
(Talk about bad karma!) My photo's next assignment
was as author of Chicken Soup for the Ho, written in confinement
at the Center for Correction of Pimp Behavior. They filled

in my teeth with gold and gave me extra chest hair,
pasted in a trashy-looking blond in a thong.
Last week my head was spliced onto the shoulders of King Kong
to point up MISSING LINK FOUND IN JUNGLE GIANT'S LAIR.

On the opposite page, there I was again—as Saddam Hussein's
eighth known double, complete with bad-guy moustache.
Yesterday I was shrunk to a fetus, held up in a jar by Orrin Hatch
to prove the sanctity of unborn life. I called the paper. "End of game."