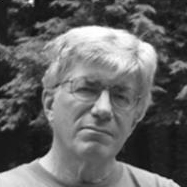 At the moment of eclipse
the moon wears steel-rimmed glasses
and drags a beard across the sky.

Meanwhile lost in the suburbs
on a school day, I'm shoeless
and desperate for a ride. The moon,

parading before the sun, casts
a shadow that withers everything
it touches. Running ahead

of its ashen sweep, I stumble
into a rush of children
flowing toward the museum,

their class trip compromised
by the unpredicted eclipse. Some
insist on staring at the sun,

burning their retinas. Teachers
scream at them, but the dazzle
has roasted their brains in their skulls.

when fate takes a capital F.
The shadow drags nearer. I push
two staring children to the earth,

snowfall in dry weeds. I duck
and cover. The moon-shadow pours
over the children, teachers, and me

and we scream with fear in the dark.
It's not a shadow but a hole
gashed right through the planet, so deep

it negates gravity. Suspended
in the gloom, I shut myself
like a bivalve. Moments whisper

in strange languages. The shadow lifts,
the moon as I imagine it
sneers behind its thick glasses

and the eclipse ends with children
prattling to the museum, none
the worse for their brief exposure,

while I remain so tangled
in the moon's long beard I've trouble
standing as upright as I should.

My Offering to the Day

As I descend Crotched Mountain
the big wind detaches a branch
as thick as my thigh. It crashes
to the path before me, missing
my big nose by an inch. The mile
of trail behind me flickers
like a snake tongue. The steep stretch,
greasy with leaves on boulders,
grins like a fossil jawbone.

Far off, the coughing of shotguns.
Today is Children's Hunting Day
when fathers introduce their sons
to the joys of the kill by chasing
corn-fed pheasants into flight
and blasting the tame birds to rags.
In a few years these kids will transfer
their skills to the army and die
for the sake of corporate fortunes.

The haunted cornfields will sigh
and the shattered birds will rise
again and again until crisp
as origami they attain
the high safety of the sky
while the dead children fester
in the beer-sozzled brain cells
of their parents. Meanwhile the stick
that nearly conked me sneers on the path,
lichen clinging to its peeling bark.

I heft it, swing it in the air.
Despite its bulk it weighs nothing.
Too rotten for a walking stick,
and too thick and clumsy besides,
but I carry it anyway,
and when I reach a brook snarling
from a dusky ravine toss it
into the current and call it
my offering to the day.