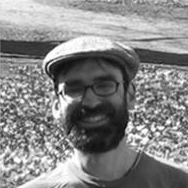 Pete Miller is a mental health worker and poet living in Seattle. He is the co-founder of the League of Citizens Concerned About Literature, a group that hangs hand washing poems in public restrooms.

"Westerners with a camera, westerners twice over." —Louis Malle

Now we give up and exhale,
finally, the dust off our lips
down into our beards,

unclench too few rupees for
another chapatti (all we dare eat), and let ourselves get
swept up by that five thousand years old

monotheism but still
too nervous for those blue arms
to squeeze the seer out of the seeing. It's

some damn slippery business, matching gods of different sizes—
just might wind up the male-pattern baldness
at the Shiva look-alike contest,

or, following an undetectably
shorter devotee into the temple's cool darkness, bump
head against the lintel and leave wearing the wrong bare feet,

stumble off yoked with the droopy weight of
that hacking sign painter's mustache
which, dripping saffron and green, splits

in garlanded bliss, the Preserver's perfecting
compassion, but also a better
chance of floating

clear through the middle
of the wel come's vacuum
to touch nothing and no one,

fouling left hand
flailing to streak
and wrinkle only

our own wide lens' never-quite-emptiness,
pulling down corners,
weird foldings and revealings, a Skokie

lingam, a Tulsa parantha, the Virgin
assuring Parvati that the writing on her Pizza Hut hat
is merely an American mantra for nourishment, as

she, in turn,
assures Christ that his sari is unisex.

Between the German's feet a backpack
with a hidden pocket's vinegar bottle
to spray to cover her
cigarette smoke at the ashram,

she borrows the guru's binoculars
to watch the opposite bank of the Ganga,
the murdered Swiss woman
sewn up in a white sheet.

Leaning, she presses breasts
hard against his arm and mutters,
"So 'disciplinic'
means you're

due to a vicious
incense sneezing fit, the resulting melted candies.
He knows,

no sweets,
no devotion.