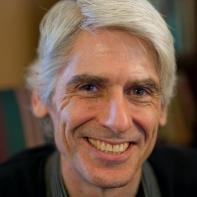 Jim Daniels’ new book, Birth Marks, was published by BOA Editions in 2013. Other books published in 2011 include Trigger Man: More Tales of the Motor City, Having a Little Talk with Capital P Poetry, and All of the Above. In 2010, he wrote and produced the independent film "Mr. Pleasant,” which appeared in many film festivals across the country. He also published From Milltown to Malltown, a collaboration with photographer Charlee Brodsky. His poem "Factory Love" is displayed on the roof of a race car. A native of Detroit, Daniels teaches at Carnegie Mellon University in Pittsburgh.

Hole in the Theory

I slipped my feet into bread bags,
then rubber boots, a theory
based on faith and poverty

Clouds in the shape of old friends dissipate
under the scrutiny of unhappy bankers
or maybe just the sun.

I voted this morning. I shook out the floor mats
and vacuumed the car with my dust buster.
The company of losers manufactures

bitterness in small waterproof containers.
I am in touch and out of touch. In reach
and out of reach. Holy water turned to slush.

Holes in that theory, and my feet got soaked.
Damp stench oozed from the back
of the classroom where we hung wet clothes

then took our seats to learn about the simplicity
of God. Memorization's trick, to imagine
permanence. If I stood outside

the polling place and sung the names
of my childhood friends, would anyone
come out to play? A rhetorical theoretical

hypothetical defeat. I bathe in redundancy.
Chance of rain followed by a chance
of more rain. A nun threw away my plastic bags

Jesus emerged from the tomb,
that happy-go-lucky dude. Didn't his
shit stink, I wanted to know.

Just another election-year stunt.
Vote for me and I'll . . .
The perfect hair of politicians is unaffected

Happy-go-ducky. Happy-stay-nutty.
It was the principal of the thing
that got me expelled.

Behind the toll booth curtain, I confessed
my skepticism and sins and paid my penance
with counterfeit coins. The sun went

hiding, and my old friends returned
nearly recognizably Republican.
I loved those boots, wearing them

on the wrong feet for stupid luck.
They made me feel like a lucky duck.
The water gathering in my boots

is the rest of my life.

From Bowling Green to Cleveland—
two short hours across the flat slab of Ohio.
But when your copper Chevy rattled and died
and we edged to the shoulder, it was easy
to scrape the loose change from the floor,
grab the roach from the ashtray, unscrew the plates,
and walk away down the turnpike.
What if we knew then you'd be a waitress
and I'd bump out dents for the next twenty-five years
of our lives and counting and counting despite two-
and-a-half college degrees? Would we have found
a phone and called AAA and kissed in the false heat
of a smudged phone booth while snow swirled
around us? Would we have squeezed up front
next to the tow truck driver and made small talk
and bummed cigarettes and copped a plea
of neglect? How much, really, would it have cost
to fix? Would we have at least kissed
that car goodbye?

We bummed a ride back to Bowling Green,
then relied on my Plymouth Satellite
with its own tenuous heat. The landlord's sheep
surrounding our old farm house missed scratching
their woolly asses against our Chevy's rust.
They stood in the yard shitting their little pellets,
wondering where to worship now. Or maybe they didn't
think a damn thing. AA and AAA, the letters
of emergency, the silent sirens of our young lives
where we imagined we could abandon anything
without a forwarding address.

a handful of pennies at a cheap bastard
and lost another job. Your hands curled into fists
as if you held those pennies
though you held nothing.

We bought rawhide whips
at the pseudo-Indian tourist
shop in Muskegon, Michigan.
Endless downpour had splattered
the campground into gray mud.
Our bleary father paid, wanting
only to be beery, his vacation
washing away. Leaky canvas, wet
matches, damp cigarettes.

Perhaps that explains
my brother making my son
a lethal tomahawk on a rainy
vacation 35 years later.
My wife grabbed it, flung it
in the lake where it sunk
with a plunk as my brother
and son both cried out.

In the basement back home,
we cracked them, to see whose echoed
loudest. We strutted city sidewalks,
flicking wildly at trees, bushes, cats, dogs,
and young children. It hurt. We knew it hurt.

for the whips, nor the display case
of switchblades and stilettos
imported from Mexico, illegal except
in that square mile of local politics.

The whips hung on hooks
in our basement where our mother
did silent laundry under a crucifix
dangling above the washtubs.
The old saints whipped themselves
for God. Jesus, sweet Jesus.

The cheap dyed feathers of my headdress
fell out in the car when my father reached back
to smack somebody. At home, our streets ran
long and straight. Our whips curled
into frayed snakes, live wires sparking.

Nothing is simple. I apologize for suggesting
otherwise. Eyes watering with pain.
Apologies never enough. Whip—
—lash! Gnashing sound bitten off.
My arm ached, but got stronger.

Those whips could still be out there
coming down on somebody.
My mother prayed to merciful Jesus
while my father swore in the name
of God the Father, the cruel one.

The cracked whip of our laughter
at the howls of pain. You can only
crack a whip at the air so many times.
Trust me. Or, better yet, don't.
Throw the tomahawk in the lake.