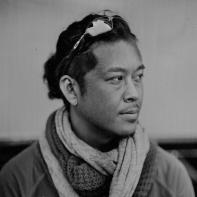 Takashi Arai (1978-) is a Kawasaki / Tono based visual artist and filmmaker. Since the beginning in 2010, Arai has used the daguerreotype technique to create individual records—micro-monuments— touch upon the fragmented reality of events in the past. His encounters with surviving crew members, and the salvaged hull, of the fallout-contaminated Daigo Fukuryūmaru fishing boat, led him to photograph the deeply interconnected subjects of Fukushima, Hiroshima, and Nagasaki. In 2016, Arai received the 41st Kimura Ihei Photography Award. His recent short film, “Oshira Kagami” won the category prize at the 72nd Salerno International Film Festival in 2018.