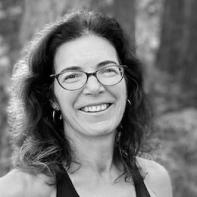 Martha Silano is the author of five volumes of poetry, including Gravity Assist, Reckless Lovely, and The Little Office of the Immaculate Conception, all from Saturnalia Books. She is also co-author of The Daily Poet: Day-by-Day Prompts for Your Writing Practice. Martha’s poems have appeared in Poetry, Paris Review, American Poetry Review, and the Best American Poetry series, among others. Honors include North American Review’s James Hearst Poetry Prize and the Cincinnati Review’s Robert and Adele Schiff Poetry Prize. She teaches at Bellevue College and Seattle’s Richard Hugo House.

What is too much

wanting. When is it too much. Like one too many Dark
and Stormies. To avoid the question, I learned to live
underground like an insect raking the soil,

like a grizzly in a cave, a place to slow my heartbeat
down to nineteen beats from eighty-four.
If you want to become full, let yourself

be empty, said Lao-Tzu. A diving beetle skating on a pond.
If you want to become full, grow notational legs
like little oars. Being given everything

is like the nest that doesn’t fall, like never finding the broken
blue-green egg. Not displaying yourself,
you’re the opposite of a seminar

on water, more a research paper on the hermit thrush.
When is it too much wanting, too much leaning
on your tripod gait, your hoarfrost,

your crepuscular. You thought the goal was wings,
didn’t know the most evolved
aspire to winglessness.

to all my bruised aubergines, all my urban eyesores.
The cackling doorbell that no longer rings,
my failed attempts to wipe fingerprints

from the airships and the intertextual. I accidentally left
my satellite of happy at the Walmart, my optimism
near the witch hazel and weed-choked basinets.

When leaves rustle, do you put them in a poem? Is it better
if the leaves are green or brown? I told my son
I decided on his namesake,

then went to the woodshed to weep, told him his birth
was a bafflement. I should have been more
like my Aunt Helen: her bowl of soup

was always half full. Less like her sister Emma, who said
the soup should be hotter, with a little more
salvation. I was ordered to give away

my placenta. The nurse said the doctors wanted it
for science. I should have said no, you can’t.
That I would take it home,

plant it in the middle of a rowboat of rats I never did
get around to commandeering, placenta-
nourished or not. That year

I was a She-Devil for Halloween—stringy blond wig,
red diaphanous gown. My dark eyebrows darker
against a yellow headache of hair.

Over the fen, under the radar, beneath the sizzling powerlines,
that liquid lettuce of sour. I can’t recall half the peppers
I mentored, differentiate the half-finished poems

from the ones I’ve copied from books, but that godforsaken soup—
why? Tonight, the light from a flashlight I raised at the sky
in 1978 reached Capella, a quadruple star system:

two giants and two red dwarfs, which of course represent
me and my three sicknesses. We told my mother
we didn’t want that soup—

who makes a soup from wilted Romaine? Tonight,
I’m raising my flask to a galaxy this gin
won’t reach for millions of years.

‹ A Poem by Lucy Zhang up a poem by Olaitan Humble ›