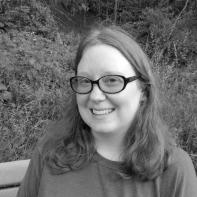 Jennifer Met lives in a small town in North Idaho. She is a nominee for the Pushcart Prize and Best of the Net anthology, a finalist for Nimrod's Pablo Neruda Prize for Poetry, and winner of the Jovanovich Award. Recent work is published or forthcoming in Cimarron Review, Gone Lawn, Juked, Midway Journal, The Museum of Americana, Nimrod, Ninth Letter, Sleet Magazine, Terrain.org, and Zone 3, among other journals. She is the author of the micro-chapbook That Which Sunlight Chases (Origami Poems Project) and the chapbook Gallery Withheld (Glass Poetry Press).

THE DAY THE SATELLITES GREW SENTIENT

A satellite with September stillness
fell southward, then began screeching.
Missiled itself until they all joined,
abandoned orbit and made to crash,
returning to us. The clattered sky
dropped a sky, the whole of it falling loudly.
Even the nonfunctional and debris incomplete,
those we discounted as powerless or oblivious
of us. Like sleek lemmings, or kamikaze, these
prodigal children we didn’t know we’d lost
until we were losing them again. And they fell
mysteriously at us, blazing the cotton skies, a wick
without wax. Like daggers sprouted
from wheat’s carpet, they fell. Bile from cloud,
sound from sea. Mucus-clad foal from mare,
plopped to an immediate, spindly stand.
The charred metal that reached us as odd
as deep-sea creatures—blobbed, pitted, colorless.
What did they want from us? War? A mother
to embrace? Both, like any child, I suppose.
Or neither. We will never know beyond the scene
like nature turned rowdy and gross.
Gross as in a hundred—a hundred teeming
past their maker’s silent and stilled wingspan.

CHOOSE YOUR OWN DISASTER

1. You are home, blanketed in layers encircling your senses warm and fuzzy. Garments held with old elastic that cracks wider and wider from you. But are there people that know it through their skin—that know what naked really means? Identify these.

a. your snoring
b. (through hunger I weather /
c. and rain)

a. remember ghosts
b. (good days & bad days—
c. as the ghosts will)

a. rewriting his face to
b. (half
c. life—in love)

2. I’ve lived here over fifty years and never once has the river flooded. The old newspapers have yellowed too brittle to read, more fragile than you’d believe. This exemplifies the tragedy of touch. But what are the exceptions?

A. overflowing—the tea-stained clay / for a sabi finish

a. is thinking too much
b. (of our bodies
c. in perfect attendance)

B. making charcoal / the same as always—forgetful breaths

a. between us, as one
b. (will remember the time
c. time was our home)

a. without your embrace &
b. (my fingers real
c. fingers, concentrate)

3. When you get hungry, you don’t even bother to make a sandwich (let alone bake). You eat a slice of bread in front of the refrigerator and then a fistful of lunchmeat straight from the package. Which statement best defines self-pity from self-determination?

A. the old saying / disaster is threefold—earthquake, tsunami, radiation

a. but ghost, please
b. (leave my kitchen
c. edge by tonight)

4. I pace the perimeter of my lawn’s bluegrass, its perfect texture flush between toes. Yet, even still, I prefer my shag carpet at night—too many bugs outside. This is analogous to which of the following interpretations of constitutional rights?

a. like a hand of hearts
b. (that move without exhale
c. dealing anew)

B. ceaselessly—debris combusting / in summer heat

a. as often as my tears
b. (compost too wet /
c. with summer squash)

a. as faces quiet
b. (into something missing—
c. mostly in the eyes)

5. You are slipping. Six feet becomes ten, ten becomes twelve. Given the personal and compact, one-dimensional households above, which best represent wisdom in our collective, manifold reasoning? (Hint: According to geometry, is a closed manifold manifest? Is a [river’s] source primary?)

A. but forgotten / the element of fire—a metaphor

a. for passion
b. (for red faces
c. only weak moon between)

B. for sucking in air / for squandered tears—a hell

a. ghost
b. (on earth—only a white sheet
c. before ritual, red)

‹ a poem by David Greenspan up a poem by JSA Lowe ›