"the coin-op" by Kevin McLellan 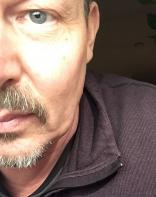 I’m the father, oh yes I am, no need for a damn test from the ceiling-mounted TV and burnt skunk-weed both greet me. A man in baggy jeans and an oversized tee whirls a single quarter through the stopped machine’s slot. He brings a folding chair outdoors, props the chair against the door, and lights up as I cram dirty clothes into a front-loader.

When I take the cold fabric mass out of the washer he takes his clothes out of a dryer that hadn’t been running since well before my final rinse cycle. I ask, Where are you from? Arkansas, he says. He’s here because he can get his pearly whites fixed for free. He says something else too, but between his thick accent and the ranting on TV I can’t understand him. I just nod. Now he brags about the raccoon he shot with his rifle, then threw in the creek. He claims, But it came back. It kept coming back.

I kneel down to fill the front-loader, notice a donut box on the nearby folding table where the self-described Arkie folded his clothes last week. I wonder if he needs this dental work done because of drugs. I wonder if I am stereotyping? The only other patron here half-watches Springer. I can’t tolerate conflict and decide to wait out the washing cycle at the nearby park, the one where teenagers congregate at dusk to smoke weed. Besides, it must be 100 degrees in here.

I notice her drawn-in eyebrows and thin hair pulled tightly back into an unassuming bun. My instincts tell me to not engage. She might be 60, yet this below-the-knee black dress with a red rose pattern shows a young woman’s flat stomach. She’s holding something oval and tan-colored, points to it using her other index finger, Water… Water… as a middle-aged man arrives on a bicycle. Water… Water… and she follows him to the recycling bin. He straddles the bike while plucking out a clear plastic soda bottle. She looks at him with interest, with maternal? interest. He pulls off the label. The jack-knife appears as if also from the bin. He cuts off the top of the bottle, hands her the plastic base, and pedals away. She returns to the park bench. I hadn’t noticed the handbag she’d left there. She reaches into it, grabs a metallic water bottle, puts this oval tan-colored thing into the decapitated soda bottle, pours water over it and into the plastic base. Is she crazy? She looks in my direction, raises her eyebrows. Wait! The thing just moved —it’s a small bird.

I turn on the window fans, realize that I made assumptions about the bird-woman, and decide to go back to the park before returning to the laundromat. But first I change into thin cotton and flip-flops, despite knowing that my feet will get filthy. Am I going back out of guilt? I wonder what I will say to her if she’s still there? That was kind of you to rescue the bird or maybe just, Good afternoon.

Hot vapor rises from the sidewalk, and just ahead outside the park gate flies swarm. What is that on the ground? It’s the bird. Its body stretched out, overextended. Was it flung here? But there is all this greenery. Why cast it aside here? And there she is on the bench, grinning, and trying to get a boy’s attention. I realize that the bicyclist never said anything to her.

My dryer has stopped. There’s no one else here. The donut box, still on the counter, is closed. Shall I just throw it away?

Three donuts remain. Their gooey coatings undisturbed, unlike where there were nine others, on impregnated wax paper. I eye the glazed.