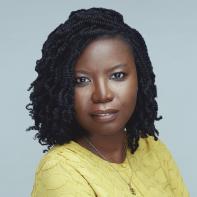 This interview was conducted via e-mail by Interview Editor Grace Tobin. Of the process, she said, “Peace Adzo Medie’s first novel, His Only Wife, is a beautiful story of a young woman in Ghana who faces adversity in her marriage to a man she does not know. Her ability to capture the essence of womanhood and the struggle for a say in a man’s world is phenomenal and reflected in this interview.” In this interview, Peace Adzo Medie talks about the process of writing her first book, the influences throughout her life that lead to the final product, and the importance of visibility for young women.

Superstition Review: When I started reading His Only Wife, I was immediately enthralled because of the opening wedding scene in which the husband is missing. Could you talk about the decisions that went into making the first scene?

Peace Adzo Medie: I wanted an opening scene that clearly illustrated the significance of the day and the pressure that Afi was facing. I wanted to show that this pressure came not only from her family and her husband’s family but from the entire community. And through the wedding preparations, as well as the ceremony and the reception, the opening scene gives us a good sense of the importance that the entire community has attached to this union but also, how much this is weighing on Afi, the new bride.

SR: In an interview with Pen America, you said, “An important role that writers can play is in documenting resistance movements. This can ensure visibility, facilitate recognition, and bring marginalized voices to the center.” Can you describe how His Only Wife plays into this role for writers?

PAM: While His Only Wife is not about a movement, it demonstrates women’s efforts to live on their own terms. I think these daily struggles are a form of resistance and are important to how every society changes over time. Furthermore, the book allows readers to hear from someone, a young woman of little means in Ghana, who is not often given a platform, even in Ghana. In this way, it gives visibility to this person and experience that is rarely offered a platform.

SR: Kirkus describes this book as “A Crazy Rich Asians for West Africa, with a healthy splash of feminism,” and, “A Cinderella story set in Ghana.” What is your response to these comparisons? What are some additional ways you characterize your novel?

PAM: There are many themes in the book, and it is rich in how it covers issues of gender and class. The book shows great wealth but also poverty and is a story of a young woman trying to climb out of poverty. There are, therefore, elements of various stories, including Crazy Rich Asians and Cinderella in the book. I think of it as a mesmerizing story of one woman’s attempts to find her voice in a difficult marriage.

SR: As an American woman with little knowledge of Ghana, I learned about the country and its rich culture. In particular, I enjoyed the descriptions of the two diverse settings in Ghana: the luxurious Accra and the small town of Ho. What was your process in choosing and developing these cities?

PAM: I wrote about Ho because it’s where I partly grew up and Accra because it’s also a place I’ve lived. When I was growing up, Ho was a small town. I think it’s more of a small city now. However, it is still a far cry from Accra in terms of geographical size, population size, and commerce and industry. It, therefore, offered a contrast to Accra. This contrast was important because I wanted to write about the growth of a young woman, including her adaptation to new surroundings. Ho and Accra allowed me to demonstrate this growth.

SR: A reviewer for Marie Claire wrote, “I don’t often read books portraying polygamy, but I enjoyed reading how Afi navigated this new relationship while also finding her voice and fulfilling her own needs and desires." How were you cognizant and sensitive to a subject that some cultures respond to differently?

PAM: I recognized that people, including Ghanaians, respond differently to polygamy and would therefore respond differently to the book. In fact, one objective of the book was to explore the heterogeneity of attitudes towards various romantic/marital arrangements in Ghana. I didn’t seek to pass judgment on polygamy but rather to show how one woman felt about it.

SR: This is your debut novel, and already it has rightfully received several accolades. It is a Time Magazine must-read book and was selected for Reese Witherspoon’s book club. Can you talk about your hopes and fears about releasing it out into the world and what has it felt like to receive such critical and popular acclaim?

PAM: It’s been incredible. I, of course, hoped it would be well-received, and it’s been fantastic to see it happen.

SR: In school, you studied Geography, Public and International Affairs, and International Studies. How did this wide body of knowledge you’ve acquired at prestigious universities help you in writing this novel?

PAM: My training and research have focused quite a bit on gender, and this is something that I explore in my fiction, including in His Only Wife. The book is about power in a relationship and gendered expectations of women. It has been informed by my academic work.

SR: Amazon wrote, “In Afi, Peace Medie has created a delightfully spunky and relatable heroine who just may break all the rules.” All of your characters are vivid. I felt I could feel Afi sitting in the room with me. When the book ended, I knew I would miss her like she was a friend. Could you explain your process of character building?

PAM: The character did not come to me fully formed; Afi changed quite a bit, but I always knew that she would be a young woman who came into her own, despite much opposition. I wanted the reader to share Afi’s experience and to make discoveries along with her. I also wanted to be true to her in terms of her voice and her approach to life as well as her reactions to experiences.

SR: Reese Witherspoon said, “It’s all about the search for independence and being true to yourself and who you really are.” Does this characterization of the novel ring true to you?

PAM: Yes, it does. It is the story of a young woman who wants to be heard and seeks to chart a course for herself in life.

SR: How will this work influence your future writing?

PAM: It has confirmed to me that there is an audience for the kinds of stories I want to tell. I will just continue to tell these stories.