"Still Life with Woman and Stroller," by Daniel Olivas 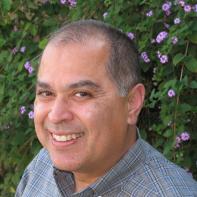 Daniel A. Olivas is the author of six books including the award-winning novel, The Book of Want (University of Arizona Press), which was also a semifinalist for the Virginia Commonwealth University Cabell First Novelist Award. He is the editor of Latinos in Lotusland (Bilingual Press), and his writing has been widely anthologized, including in Sudden Fiction Latino (W. W. Norton), and New California Writing 2012 (Heyday Books). Olivas has written for many publications including The New York Times, Los Angeles Times, Los Angeles Review of Books, La Bloga, Fairy Tale Review, Exquisite Corpse, PANK (online), Pilgrimage, and The MacGuffin.

You see her each morning at 7 a.m., almost precisely the time you’re having your first cup of coffee, sitting at the Dell laptop you’ve set up on your grandmother’s old, rosewood desk that you’ve stationed in front of the bay window so you can feel as if you’re enjoying the beautiful Los Angeles weather when you’re really just starting a day of procrastination when you should be working on your freelance writing and getting more paying gigs so that you don’t lose this little, two-bedroom, one-bath house that is your palace despite the recent leaving of your boyfriend who moved out three weeks ago this Tuesday.

And this woman pushes a very expensive Orbit Baby Stroller while the French roast coffee warms your face as you sip from the large KCRW coffee mug that was a premium for that $35 donation you made but really couldn’t afford but you figured it was a good public radio investment for when you fulfill your real passion, completing that half-finished novel about a Chicana who is the first in her family to go to college and who has written for some of the best online publications such as Salon and The Huffington Post and the Los Angeles Review of Books and The Rumpus but who finally finds an agent and publishes her novel with Random House and then Bookworm’s Michael Silverblatt discovers this “lyrical new voice” and the rest is history, as they say. And it would be rather embarrassing when the real Michael Silverblatt learns that this young novelist listens to KCRW but never gave money, even during the pledge drive, so why should he give her the time of day when she can’t even pay for the enjoyment public radio gives her? Money well spent, no doubt. Plus the mug is nice.

The woman stops right in front of your house—something she never does—pulls out her iPhone and swipes the screen a few times. And then you see it. You realize it’s not a baby. You squint, try to focus on its little head. He—she—it, is really strange looking. Strange is really the word for it. It’s very small and gray, except for a white stripe down the center of its face. It meows but you can’t hear it through your too-expensive, double-paned bay window. But it clearly is meowing and blinking and then licking its little, furry lips. The woman reaches down and scratches the cat’s neck which the cat clearly loves.

The woman pats the cat’s head for good measure, puts her iPhone into the back pocket of her jeans that are too tight—if anyone asked you—jeans that show off every curve of her round ass that most men would die for, leave their girlfriends for, just like your boyfriend, Mario, who, in fact, left you for this woman with the tight jeans and the cat in the stroller. And you watch as she restarts her journey, pushing the stroller along this Los Angeles street on this beautiful Los Angeles morning, the precise morning that you promise yourself that your life will begin in earnest, that your literary passions will be fulfilled, finally, and without any further delay. The morning you will recount in superb detail when Michael Silverblatt interviews you at the KCRW radio station in Santa Monica that you helped support with a $35 donation. An auspicious Los Angeles morning when true art—and your life—bloomed.

‹ "Tarzan," by Dallas Woodburn up "Lemonade," by Dariel Suarez ›