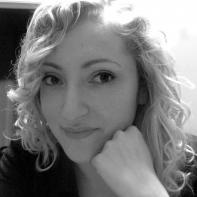 Lana Rakhman has current poems published or forthcoming in Whiskey Island, Weave, New Madrid, Harpur Palate, Salamander, 5th Wednesday and others. She received her MFA from Northwestern University, where she was the former poetry editor of TriQuarterly. She lives in Chicago with her husband and unruly cat, Pretzel.

Lesson number one: when putting ink to skin, make sure
the fire has gone out. Lesson number two: when collaring
a woman’s name on your neck make sure that the letters don’t
bleed, for god’s sake, the letters are leaking. It makes one ask:
why the disambiguation? Why not pick a border that contains,
as it should, the love that has almost saved you? Are there not
enough fabricated horrors? But O, that’s the very task we under-
take: nothing is as human as the blood in your throat. Those
vessels are nebulous, neither here nor there: why wear a blue
collar when a black one will plant you square in the middle
of the wilderness? & you are one wild offspring, we know: you
are the sculptor & the clay. The wheel & the pedal.

When is an embrace the
antithesis of hunger? Restrain,

re-train, recite the words you
learned again: the payoff,

the payload, the gaining of
momentum until the word pain

plays like a violin slicing your
fingers to the quick. Stick it

out, you tell yourself; show him
what it means to be a role, to be

alright – the father is a phantom,
but only in sleep. He creeps up

every morning, checking your
chin for signs of chaos :: Well here

we go now, you telling me how
to live my life, how to handle

that boy, how to touch that woman
raw. It’s not like I ain’t handled it,

believe me. See my eyelid? That tattoo
says I’m not done looking yet. I’m not

done showing you the beauty of the hush.

Muzak plays in all fast-food
spaces; a tourniquet couldn’t
fend you from this storm.

Fast food, like fast women,
gets its name from the
howling windows of trucks

go whizzing by as if they owned
the black-top, race-top down

& out like a thief off his
game; in the name of God
where did you get that frown?

Is pensive an inheritance? Is
looking away when your
mama & her man are

the happiest of meals a way
to say I’ll see you when I
see you, when I’m gone,

when I’m older, when I
drive my own pickup &
pick my own men I’ll be in

the same seat, hen & all.
This refrain, stuck in a

hiccup, joined at the hip is
how I lick all your wounds.

Two open mouths at each other is no
way to begin the night. Where to go
when two dark horses, entranced by
the sound of their crashing hooves,

run full tilt toward one light? Who
is to blame for the lack of rain? Muck
spread slowly, deliberately under-
neath the skin to prevent intrusions.

Louder, louder, the hoarser your voice,
the less people knock at your door. Shut
her up/shut him out/this collision
arrives in infancy/grows with ashen

water/blooms into the prettiest dam-
ned oleander you’ve ever tasted.