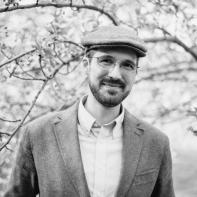 Patrick Thomas Henry is the fiction and poetry editor for Modern Language Studies. His fiction and essays have recently appeared in West Branch online, Lake Effect, Sundog, North Dakota Quarterly, and other publications. His work was selected for inclusion in Best Microfiction 2020, and his short story collection manuscript won the 2022 Northeast Modern Language Association Creative Writing Book Award, selected by Jean McGarry. He is an Assistant Professor and Coordinator of Creative Writing at the University of North Dakota. You can find him on Twitter @Patrick_T_Henry.

Like the candescent contrails off a rocket, the boa of red carnival tickets plumes out behind you, Lissa, my dear sister. The strand lassoes three times around your neck, flutters in the breeze from the arcade’s fans. You glower at me from over the frames of your jumbo-sized sunglasses: jay-blue tinted lenses set in comically large frames the same brittle purple as the bucket seats in the bumper cars. Your stirrup pants are cobalt as a pilot light and pulled snug to your waist, the elastic band teased by the fringe of the Penn State sweatshirt you’ve hacked into a plush crop-top. Your fanny pack slouches on your hip, the wires of your headphones twining from the zipper, the black sledge of your Discman peeking out. Paula Abdul vibing incantations in your ears, Spellbound, your hip bumping in time with the music, with the gyration of your palm on the joystick knob, with the typographical precision of your fingers on the Skittle-bright spread of the six attack buttons.

I lift the Polaroid camera and press the stiff shutter button.

The square of film dims the whites of your eyes the sudsy, yellow-grey of old dishwater. The same yellow-grey our Super Nintendo will sour into, after years of sunlight on the living room TV stand. But my memory preserves your bleach-righteous stare, the whites veined with anger, because Blanka just suplexed your Chun-Li into the quayside planks of an Amazon village. Blanka arches his spine, pants over KO’d Chun-Li, a digital wind bristling his pixelated, orange mane.

What, you say, and I hold my palm out, for alms: I’m out of tokens.

You unzip your fanny pack and slide out a fuchsia-and-red, leopard-print slap bracelet. You grate the plastic across the zipper. I think of our dad’s metal ruler, clacking post by post along the banister.

I offer up both wrists. Three slaps earn a token. I take eighteen on each wrist, thirty-six in all, and each one’s worth it. I watch that bracelet lash and crack and whip-snap retract, and I think of Indiana Jones disarming Nazis of their sidearms.

I almost ask why you never wear the leopard-print slap bracelet, why—if they’re so cool, so radical, so bad, as you’re always telling me— your own wrists are manacled in rubber bands and friendship bracelets braided from embroidery thread.

Alright, you say. Get your stupid face out of mine. Lost my fucking machine over you.

Like I care. I’m twelve tokens richer, sorer by eighteen snaps to each wrist. Thirty-six stings that will buzz my wrists and make the joysticks against my palms feel like they’re rattling hard as the steering columns in the cars you taught me how to hotwire.

You slap another token down on the Street Fighter cabinet, stake a spot after the kid who stole your machine. A kid with Coke bottle lenses and an Iguana Don t-shirt, whose whole deal screams future vice principal in neon lights. At the snack bar, you order a slice and a Dr Pepper; you eat, drink, suck the orange grease from your fingers, and glare down your usurper.

I raise the Polaroid, toggle it so you’re just off center, one elbow on the snack bar counter, the aura of the Galaga cabinet dawning behind you. The flash sets off, just one more lightning bug snapping off amongst the arcade’s static bursts of light and sound. The photo ejects. I’m a second too late to snap you tossing the tail of red tickets around your neck for another loop, a second too late to see you tilting down your shades and leveling your gaze at your Street Fighter machine. You blink—blink—blink—and then Iguana Don’s flailing at the controls.

At twilight, before the park’s nightly fireworks, you’ll tell me the magic is easy. You’ll model the technique in the visor mirrors of the blood-orange Corvette, which our father abandoned when he walked out on us. We agree on a favorite conspiracy theory: he ran off to compete in a super-secret WWF tournament; someone curbed him; no one missed him. But if you see him again, you vow, you’ll give it to him. The stare. It’s easy, you’ll say, as you place your thumb and forefinger on the bridge of your shades and slowly glide the glasses down your nose. We’ll practice. On the visors’ mirrors, our eyes will be moons, Death Star serious, vaporizing obstructions with the nebular fury of wild, forsaken kids.

But only your magic can make a kid like Iguana Don panic and pummel the arcade controls with his fists until the park workers, in their red polos, intervene.

I’m not gravitational enough. I can’t make anything stay. Our father. These moments with you, Lissa. Or maybe my gravity’s too intense, because everything around me seems to implode into fragments, pixels, the remnants of so many moments that felt immense as asteroids.

He’s vanquished, though. Iguana Don. Iguana-gone, I’ll pun to you later, earning another slap of the leopard-print bracelet. As the park workers drag him out, you fling the red-ticket boa around your neck. I raise my camera, take the shot. I’m quick enough on the shutter to catch it, what the image will show as a feathering, red thread. The ticket-boa glories behind you like the twin-tailed revelation of a comet and you reclaim it, the machine, your game, your time and place.