"The Balcony In Three Acts" by Carlo Rey Lacsamana 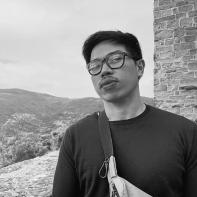 Carlo Rey Lacsamana is a Filipino writer, poet, and artist born and raised in Manila, Philippines. Since 2005, he has been living and working in the Tuscan town of Lucca, Italy. He regularly contributes to journals in the Philippines, writing politics, culture, and art. His works have appeared in Esquire, Colossus Magazine, Drunkmonkeysweb, Lumpen Journal (London), Amsterdam Quarterly, Literary Shanghai and in other numerous magazines. One of his stories has been recorded as a podcast story in the narrative podcast Pillow Talking (Australia).

The Balcony In Three Acts

Through the window in the living room I see my neighbor, an elderly woman whose name I have never learned, hang a freshly washed bed sheet on the clothesline from her balcony. The faultlessly white bed sheet flaps mildly like a sail, brimming beneath the clear, windy midday sun. No other piece of cloth has listened with such forbearance to our dreams and nightmares, to the intimacies that can happen only in the bed, to our disappointments and triumphs, to the worries that delay our sleep, to the whispers that put us safely to sleep, to the truth that could not be spoken, to the lies that we desperately cling to, to the longings of two people lying together in the cover of the dark than a bed sheet.

In that simple domestic act of hanging, the bed sheet becomes an open confession: a confession which exposes our sins, troubles, wishes, and desires—nothing unique in them, so familiar they are that no one is shocked, no one is surprised, not even us, no one blames and is blamed, no one judges and is judged; thus there is no feeling of shame or guilt or embarrassment or a need for a priest to hear our sins. No other fabric offers a sanctuary of refuge and forgiveness than a bed sheet hanging on a clothesline. Only the bed sheet knows.

Washed and hung, brimming with the fresh odor of detergent which, judging by the smell, seems to have cleansed all the sorrows which the bed sheet has carried and endured like a mother. When it dries, probably in the late afternoon, everything can start all over again, everything is forgiven.

Carry me again, desire me once again.

I was familiar with her speaking voice for we had had our small friendly chats the few times we ran into each other at the stairs of the apartment building. But her singing voice was altogether unheard of to me until one morning I went to the kitchen to close the window I had left open the whole night. Through the window which had a direct access to the balcony a beautiful voice arose. It was my neighbor: a shy middle-aged woman from Ukraine who lived with her two daughters was singing while hanging clothes to dry. I could see her faint reflection by the glass of the open window. She clipped each shirt on the clothesline with motherly care as though the absent body was there listening, clinging to her hands.

There was something in the song she was singing and in her voice that was holding. An image of a vessel, or a cradle, or holding hands come to mind. It gripped you. The song recalled a certain memory of leaving. I say so because I could not understand the words she was singing but the melody carried a familiarity of a shared sorrow and a hoped for consolation of one left behind. A song that had been sung for thousands of years when longing first came into the world. And the way she sang was as clear and soothing as the wind-chimes that ring when touched by arrival. A voice that puts both babies and men to sleep.

Lullabies were first sung when the memory of separation turned into sleeplessness and the weariness of waiting lengthened the already long night. Sleep is the supreme aid to pain. Lullabies are passwords to sleep.

In sleep the gift of dream may open towards the possibility of reunion. To sleep is to be near. Dreams, if they do come, are the borderline between nearness and distance, separation and reunion, betrayal and forgiveness.

Sleep is not analogous to death; for death is the finality of pain while sleep shelters it so as to befriend it.

Perhaps the reason why lullabies are more persuasive at night is because they approach darkness not with a sense of impotence or despair, but with a sense of reassurance, through their slow, haunting melodies, that the darkness is not only inhabited by cruelty and indifference; that there is a corner somewhere hospitable to tenderness, if only sleep will come. (I am reminded of the stories of mothers in war-torn places who sang lullabies to their children in the middle of a crossfire.)

When I saw her by chance one afternoon on television in a documentary program for the first and perhaps the last time she was already very old. The program was called, Le donne della resistenza (Women of The Resistance). She was being interviewed in the small balcony of her apartment where, I believe, she would spend the remaining relatively peaceful years of her life. (Outside the troubles of our century continue.)

We never met. Because our lifetimes are as distant and different as the stars in the constellation. In introspection our lives are not remote as they seem. She might have died before I was born, died in the century I was born, died for that century to be born. The earth-shattering events of history which she had seen and participated– the two world wars, the class struggle, the imprisonment of the Italian philosopher and labor organizer Antonio Gramsci—an event which she said devastated her, the battle against fascism, and the perpetual fight for human dignity and social justice– now receded into the thick lenses of her eyeglasses. The many tough years behind her have accumulated in her white hair.

One could read in her wrinkled face a map, but instead of routes and paths one finds memories which, as she narrates her life, she followed closely and found solace in remembering. I can tell she liked her coffee a little too sweet.

There was something modest about her like the view of a remote village on top of a hill. Modesty doesn’t imply passivity. She could milk the cows, scrub the floors, and cook meals as much as she could throw stones at invaders. If necessary she would take up arms. And maybe she did. There was nothing saintly about her except that she was thin and sinewy. Her hopes were not laid upon the divine but on her fellow men despite the latter’s capacity for barbarism which she fought to eradicate.

When she began to talk I thought I noticed a note of relief overlaying her voice: a relief so homely like the sunlight through the curtains in the morning or the feel of warm water in the skin during winter. Her old woman’s voice, soft and cool as a fresh blanket. Maybe because she was asked to talk about her childhood, her family. They were poor and happy.

The interview lasted an hour and an entire century was told. She spread out her life like the olive groves she tended on a clear and sunny day. Her life was decisive to the end, unquestionably sure of its purpose that it was spared of the disappointments and the loneliness that come in old age.

Why did you decide not to marry? Do you have any regrets? asked the interviewer in a somewhat cold and pathetic tone. When she heard the question an almost invisible smile flashed through her eyes– she was returned to her youth again– which expressed that she was born with answers in her hands which she held tightly when the struggles were doomed to defeat and held a little loosely when they needed fresh air and light, because the questions of history in which she lived, and perhaps we live, are as uncertain and incongruous as their answers. But unlike history she was completely at ease with herself.

Why? Because I decided to commit myself to a movement. A movement so immense it was possible to change the course of history, she said without a touch of sentimentality or rhetoric. She was the very opposite of a politician. The words came out as precise and as measured as the vegetables she chopped for minestrone. In life it’s either one or the other. I have no regrets. I was gripped by the fact that ordinary people could make a change in this world and for a woman to take part in an important political activity gave life a deeper dimension. There is real hope.

There is real hope. I want to believe that our lifetimes are as close and meaningful as the stars in the constellation.

‹ "That Big Eye in the Sky" by Brooke White up “What am I Teaching With My Body?” by Cassandra Whitaker ›