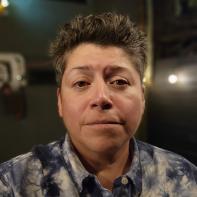 Raquel Gutiérrez is an arts critic/writer, poet and educator. Gutiérrez is a 2021 recipient of the Rabkin Prize in Arts Journalism, as well as a 2017 recipient of the The Andy Warhol Foundation Arts Writers Grant. Her/Their writing has recently appeared in or is forthcoming in Art In America, NPR Music, Places Journal, and The Georgia Review. Gutiérrez teaches in the Oregon State University-Cascades Low Residency Creative Writing MFA Program. Her/Their first book of prose Brown Neon is an ekphrastic memoir that considers what it means to be a Latinx artist during the Trump era. Gutiérrez calls Tucson, Arizona home.

“Center the Site of Contradiction” an interview with Raquel Gutiérrez

This interview was conducted via e-mail by Interview Editor Rich Duhamell. Of the process, they said, “The essays of Brown Neon construct such a vivid portrait of the queer Southwest in the late 2010s, and Gutiérrez’s insight is at every juncture of intersectionality. They are unflinching in meeting the rough, uncertain edges of identity from every angle and still center finding one’s art and people amongst it all. Every essay was a prompt for discussion, and I am excited to see the conversation keep going.” In this interview, Raquel Gutiérrez talks about the audience inherent to art, the necessity of nuance, and community in its many facets.

Superstition Review: Could you describe the process of detailing these essays and making the hard decision for when it was finished? With so much experience and nuance to add, how did you decide what made the cut and what could be done without?

Raquel Gutiérrez: These essays were written over the course of 2016-2020, essentially during the Trump Era. I knew I would organize Brown Neon from a personal space (such as my relationship to Jeanne Córdova) to a more macrocosmic set of inter-connections that start with artists and activists and the relational dynamics between both groups in pursuit of liberation, or at least of a world where we could support one another in the context of coalition-building. For me, I had to ask what it meant to mine my life of belonging to different creative and activist communities and distill those experiences on the page in a time when we were seeing draconian, anti-immigrant, racist, anti-poor policies executed successfully? I knew I was going to engage themes of loss, land, and liberation and the contradictions that complicate these themes. Deciding is exactly that–making a choice and seeing it through.

SR: “Do Migrants Dream of Blue Barrels?” features prose akin to the title, lines like “These water stations are myth come to life, a border fable people with heroes and rogues, monsters and saints in search of the magical elixir” painting the liminality of the border crystal clear. Amidst these musings are the bleak realities like the ASU lecturer arrested for helping migrants and a list of accounts of border crossing. How did you balance between the two, dropping poetry and mentions of policy in equal measures?

RG: Being out in this part of Southern Arizona, less than 20 miles from the U.S.-Mexico border, for nine hours, driving 3-10 mph through a stretch that included Green Valley and near Arivaca, moving slowly through that hostile and overheated terrain was maddening. A lyrical idiom seemed to be the means to convey the harsh reality of this landscape but also to somehow imagine the space through the fever dream that is actually traversing it. However, I was in a comfortable and air-conditioned vehicle. I will always only be able to imagine the terror of crossing these borderlands on foot. It’s easy to be numbed to the structural violence that permeates these borderlands, and so I felt the challenge to write something that would hopefully haunt people into activating against these terrible policies.

SR: “Art in the Time of Art-Washing” was a favorite of mine for featuring the struggle of having to perform to ‘prove’ you’re brown/queer/conscious enough in callouts that “felt like we were being asked to show our papers.” People love an underdog until they’ve won too many times. How have you confronted this ‘damned if you do, damned if you don’t’ approach to recognition and desire for upward mobility?

RG: Making art, whether as a visual artist or a literary one, requires one to engage some sort of public audience. It’s always a risk putting yourself out there by way of your work. And making work is very personal. There’s a reason we refer to these works as ‘the children of the mind.’ We love our children and hope others will care for them, too, once we participate in a public reading, or an exhibition, or through publication. But there are socio-economic conditions that underpin our desires and ability to engage the public. In this essay I’m thinking about the way real estate and development has upended this idea of making art for your community. The community is on the verge of being destroyed, and sometimes artists are seen as instruments that aid in that destruction. It’s complicated and ultimately artists who have a rising career or at least a foothold in some market (where their work is bought and sold to speculators interested in an art that will appreciate quickly) are lightning rods that generate debate and inspire boycotts and other punitive economic actions. For me, all I can do is make the best effort to narrate these encounters honestly and to center the site of contradiction as an entry point for readers who can appreciate the nuance and complexity. I don’t have the answers, but I make space for the questions. I think my readers at least learn something new or consider points they hadn’t thought of before when it comes to artistic modes of making a living.

SR: Every few pages, I found myself highlighting a name or a title of a piece that you reference — some familiar but most not — in a sort of bibliography, only for you to follow them with the sentiment that these points of views are not enough, that they do not examine all of the nuances. In creating this type of mosaic, can you talk about the role of those shadow texts and figures in your own writing process? How have these thinkers and writers influenced you as you crafted this book, but also as you lived the experience of developing as a writer?

RG: It’s the critic in me that brings in the range of texts to add tension, dimension, light and sound to the range of insights that converge in my essay work. I’m interested in conversations that happen on the page. We have them with art, literature, film, and their politics all the time, or at least, I do. And sometimes it’s also a way to turn readers onto texts that are speaking to their own formulations on art and politics. These artists, writers, and critics, too, have helped me through what it means to make creative work less an individual kind of expression and more of a desire for political commitment.

SR: I was particularly taken with the inclusion of the truth wall early in this collection; I feel like this collection itself is a truth wall. Each essay is its own adobe brick detailing this niche of the Southwest. Reading instances of queer life from California to Texas is like a keyhole into a community that is part of the foundation for the next rendition. Can you discuss the difference in the queer scene from 90’s LA to today’s Tucson, especially in regard to visibility and intersectionality?

RG: I always think of community differences in terms of generation. I’m firmly a Gen X queer, and much of my consciousness was seeded with the struggles queer people in the 1980s endured during the Reagan Era. What does it mean to have your government abandon a whole group of people during a pandemic? Well, this generation of queer people can draw on the experience we collectively witnessed with the COVID-19 crisis. Queerness is always a desire to challenge the structural inequities around healthcare and housing. It’s not nightlife or desirability, or respectability. Sex and pleasure are organizing strategies. For me, that political agitation is what brings 90s LA into focus with late 2010s/early 2020s Tucson.

SR: Even in reading other interviews about your collection to make sure I’m not prompting the same questions, there are these interconnecting webs: graduate advisors cited, mentors as fellow interviewees. When you were first stepping into the scene, how did you navigate when everyone seemed to already know everyone else?

RG: I let my curiosity and enthusiasm lead. I know what my intentions are–to deepen my awareness and knowledge of a community and its various histories. I wanted to feel empowered about my identity and doing so in community felt like an obvious way to do that. There’s a lot I have learned about myself in community with others and the histories that buoy our networks. Community belonging is a way to figure out how to survive, thrive, and live on my terms. How to heal early traumas, how to unlearn toxic behaviors drilled into me from my early caregivers, how to resist the impulse to surrender my agency. Sure, you encounter your fair share of gatekeeping, but that's a reflection of a scarcity model and resource hoarding. You put your faith in your desire for liberation and go from there.

SR: Your bio names “the DIY queer and feminist post-punk zine culture of the 1990s” as your intro to the art scenes and communities, and your own community has only grown from there. How do you think that has changed in the few decades since? What would you consider a young queer artist’s foot-in-the-door now?

RG: If people want to connect with other poets and writers and makers and artists, there’s a way to do that in a way that’s about authentic connection and not climbing up some career ladder. For me, I was grateful for language and music and art provided that for me. It stirred the emotional machines in my brain and spirit and helped me take the steps to inhabit my own language making modalities. I encourage young, queer artists to be a part of a commons where you can see work, support other artists, and take a risk to share your creative expressions in return. Find it or make it. That was what was like for me as a younger person. But, also, remember: I was raised in Greater Los Angeles, and I was very fortunate to find those commons early on in a pre-digital age. Now, you have the Internet and that’s definitely a way to connect with your future fellow travelers. You have to put yourself out there, to put it bluntly.

SR: With your two MFAs from University of Arizona — one in Poetry, the other one in Non-fiction — I’m curious about the difference in process in approaching poetry from approaching prose in essays. How do you think your academic study of the forms has influenced the way you take it in and dish it out?

RG: Poetry has taught me how to do fun things with syntax. Or, rather, it has improved my syntax. I often say to anyone who’ll listen that poetry is fundamental to language making in the same way that the piano is foundational to composing music. It has proven to be a solid foundation for my writing. Poetry is also a series of experiments in compressed images and concision and thus for me it’s also a very intimate space. Poetry enables an intimate readership which feels sacred to me. Prose is a way for me to connect with more readers. It’s like a dinner party versus a concert.