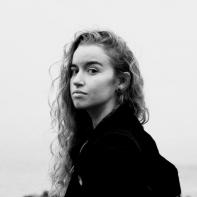 Kathryn Bratt-Pfotenhauer’s work has previously been published or is forthcoming in The Adroit Journal, Crazyhorse, Poet Lore, Beloit Poetry Journal, and others. The recipient of a 2022 Pushcart Prize, they have won awards from the Ledbury Poetry Festival and Bryn Mawr College, as well as received support from The Seventh Wave and Tin House. Their chapbook, Small Geometries, is forthcoming with Ethel Zine and Micro Press in April/May 2023. They attend Syracuse University’s MFA program.

“Image: a meadow and then a meadow backwards.”

In the clearing, the calf can only make
a wide circle around what it does not know.
Its mother somewhere close, lowing and chewing
grass, the tags through their ears reflecting sunlight.
They have been assigned a number. They have been
given a purpose. In the clearing, a man with a knife,
advancing on the calf. It is out of the way. No one
will guess what he is doing. The man is starving,
but that doesn’t mean you should have sympathy
for his situation. He is about to kill something living,
and close to its mother. For years, I cleaned my plate
of meat. I divorced what I saw from how it got there.
At a farm once, I was taught to kill a chicken. I put it
in the kill cone and watched another person cut
its throat, watched the blood come ribboning out.
The knife, sticky and feathered and sharp. People need
to eat. But— indelible is the squawk, the panicked flap
of wings. I remember saying no. I remember saying stop.
And then my mother, with her bowed head. It’s not
that she didn’t see. It’s that she wouldn’t.

Like this, the dead elk was deposited onto the tarp:
rain crowned its antlers, the scruff under

its neck glistened with dew. In murder, as in living,
the animal sound was paramount, the death-cry, the orgasm,

how we communicated we were in danger, or pleasure. I heard
nature cry out that day. What it meant, I still don’t know. The birds

lifted from the trees like an eyelid fluttering open.
The trees shuddered their leaves against the blood spatter.

I was younger then. I knew nothing of death except my father
wielding the rifle, then the knife. My hand gently patted

the elk’s dead, dead flank as my father grabbed a handful
of its hair and held it steady, began to cut. I thought I was

comforting it, or maybe I was comforting myself.
Nothing will be wasted this way, I thought. Nothing left.

Silence in the car as we drove home with the elk in the backseat,
blood pooling in its two tusked ivory teeth. I have the luxury

of writing about this violence in hypotheticals. We never
killed the elk. We never opened the animal from sternum

to groin to see what organs lay beneath; we were never
that fascinated with our own bodies, their sounds. The elk was dead

when we got there. The blood had already seeped into the soil.
Tiny animals had already made their homes in the bones. Eyes

had become less than eyes. A cluster of maggots peered through the flesh
shyly, like girls around a velvet curtain at a ballet recital.

We didn’t know what to do with ourselves, or the body, so we left it
there. I could say something about nature taking itself back. I could

say something about the murder. Here it is:
nothing was wasted, nothing was left. But—

In the center of its forehead,
a bullet nestled like a small child.

‹ A Poem by Joanne Diaz up A Poem by Natalie Giarratano ›