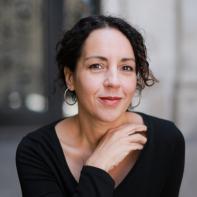 Angie Cruz is a novelist and editor. Her most recent novel is How Not To Drown in A Glass of Water (2022). Her novel Dominicana was named most anticipated/ best book in 2019 by Time, Newsweek, People, Oprah Magazine, The Washington Post, The New York Times, and Esquire. Cruz is the author of two other novels, Soledad and Let It Rain Coffee. She’s published shorter works in The Paris Review, VQR, Callaloo, Gulf Coast and other journals. She's the founder and Editor-in-chief of the award winning literary journal, Aster(ix) and is currently an Associate Professor at University of Pittsburgh.

“Writing for My Own Entertainment,” an Interview with Angie Cruz

This interview was conducted via e-mail by Interview Editor Rich Duhamell. Of the process, they said, “Angie Cruz intuits these kaleidoscope characters in How Not to Drown in a Glass of Water that would be just as at home in an autobiography as in a narrative. Her dedication to authenticity in voice transforms readers into close friends allowed into the rich inner lives of these immigrant experiences. It was such a pleasure to get to know Cara Romero the same way she introduced herself to Cruz: by bringing us along for the ride.” In this interview, Angie Cruz talks about getting to know her characters, the freedom to experiment, and the communities that inspired her to start and keep going.

Superstition Review: From page one, I was floored by Cara’s voice! She sounded exactly like my great-grandmother, tangents and all, and I’m certain others will have those same memories. In a recent interview with Dominican Writers, you’ve spoken about a woman teaching herself English in the subway as the original inspiration and how that woman made you think of your tías and grandmother. Can you describe the process of moving from hearing this character in your head to putting her to the page?

Angie Cruz: Thank you for this question. It's impossible to describe the process of how the voice goes from head to page, it’s a beautiful mystery to me, and I want to keep it that way.However, I have learned the hard way that when the voice comes to us as writers we must not wait and make sure to write it down immediately. The day Cara Romero came to me I was about to get on the train in New York City. I opened a google doc and for my entire 40 minute commute. I wrote down everything she had to say to me. A voice like Cara Romero is a result of years of listening to countless folks tell me stories about the challenges they have faced with unemployment, gentrification, mothering, etc. So what I am trying to say is that the process of honing a fictional voice is practicing being a better listener to those who are willing to talk story.

SR: Your writing places us so soundly as Cara’s captive audience, there’s no daring to question her perception of the story’s events beyond the grandeur of the belief in the fortune teller and typical mother-infallibility. I hadn’t even considered the legitimacy of her sister’s upset until their confrontation later in the novel, much like Cara herself. How was it, filtering all other characters through Cara’s lens?

AC: This book went through numerous drafts. The first draft was Cara answering a list of about 40-50 most popular job interview questions. I wrote this draft on my phone in a Google doc and I decided I would only work on it while I was commuting on a train, bus, or plane. I did this because the writing  felt less serious, more like a private game, a literary game. Initially, I didn’t trust that I could pull off an entire novel with just Cara’s voice so I wrote a version where her best friend, Lulu told the story. Then another version where the interviewer had a voice. But in the end, Cara Romero was enough. However, I don't think I could have known as much about the other characters without those prior drafts. In the end, the final version of the book included the best of all the different drafts.  Writing from those characters’ [points-of-view made it possible for Cara to tell the story of everyone that were part of her life.

SR: The sentence structure and idioms in How, much like those in Dominicana, give a determined self-taught-English lilt. How did you negotiate the balance of authenticity while still giving us glimpses into where fluency fails?

AC: Dominicanawas written in English with a Spanish syntax to stress that Ana, the main character, was always speaking in Spanish. For How Not to Drown in A Glass of Water, Cara is speaking with an ESL syntax, so the sentence structure and word choices are quite different. This mode allowed me to play with propositions that are commonly mixed up when learning a new language. It also allowed an opportunity to add layers of meaning to standard English that encompass the complexity and breadth of the immigrant experience.

SR: The back and forth between phonetic English and poetry when filling out the applications and legal forms was striking in between the monologues — from “I can werk. I want to werk. Thenk you.” to “Degree Earned: Survival”. What was the process there in choosing to do both?

AC: Throughout the book I created rules to be consistent with the language that was truest to the character. I was conscious of the fact that Cara Romero had a limited English vocabulary and so I would lean on English words that are closer to the Spanish. In instances where Cara was writing in a scene, she would sound out the words phonetically in English.I made some choices so the reader could see how she moves through language.

SR: The reveal of what made Fernando run away was such a momentous question of character for Cara. How did you plan the timing of that reveal, making sure we have enough time to come to understand Cara, but not too late to where it lingered with readers?

AC: Once I understood I would be writing Cara’s story within 12 sessions where she meets with the interviewer for about 30 minutes, I moved scenes and subplots around. A lot of this book centers on mothering and how she estranged Fernando. It was important to show how much Cara loved her son so that readers became invested in their story. Also, Cara telling her life story to this counselor every week gave her the opportunity to make connections about her life and actions. So the timing was composed with cause-and-effect in mind, with reactions after actions. Most of this happens in revisions when I am trying to make sense of the mess.

SR: How was it to go from writing a fifteen-year-old in Dominicana to a woman in her fifties in How? It is rare to see a novel centered around an older woman, but such a sudden upheaval in life as losing a job she had for decades makes for such a rich story of reflecting on a long life!

AC: I didn't think about this age difference while writing. These are wildly different novels and worlds. Once I have a hold of a character, they lead me, and I trust the process. All my characters are strangers to me. I enter into writing a book wanting to know them. Often, I feel conflicted by them and their choices and when I am revising, I think about how to be closer to them, love them more, understand them more. When I wrote the first draft of this book, I was seriously thinking that I would quit writing . When I started How Not to Drown in A Glass Of Water in 2017,  I was so disheartened by all the rejections for Dominicana. I said fuck it, I’m just gonna let publishing do its thing and I’ll write for myself. That’s why Cara Romero was more fun to write. This new book was a return to the way I was writing when I was in my twenties when I was staying up late nights writing for my own entertainment and curiosity.

SR: Across both How Not to Drown and Dominicana, there is this dedication to a community of women. From both characters coming young and alone to a new country, to Cara having to face losing friends to old age, how was it writing this love of peers across decades?

AC: I was raised by a community of women who faced many challenges. Even with everything going on in their lives, they continually showed up for me. I don't think of writing as a solitary act. Many people have sacrificed for me to be able to have the space and time to write my stories. I think Cara’s way about her and how she is with her community reflects that.

SR: You are one of the founders of Aster(ix), a literary arts journal dedicated to translations and addressing social justice. How would you say your part in amplifying voices that have historically been censored or omitted has influenced how you look at writing, both for others and yourself?

AC: For sure editing a journal like Aster(ix) has helped me have a sense of what is happening in contemporary fiction across genres. I have a large diverse editorial team and they are always keeping me on my toes. Aster(ix) also encourages writers and artists to try at something new. Two years ago we published The Ferrante Project where we featured 16 well known writers anonymously. This anonymity permitted the writer to  liberate themselves from expectations such as aesthetics, genre, theme, etc. And for many of us who participated in the project we learned something new about our work, we noticed how we censor ourselves. It was a productive exercise for me and influenced this new book for sure.

SR: You’ve talked about how the start of Cara’s story came when you were struggling to get Dominicana published and thought you would never publish again. What was it like to get How Not to Drown signed? What are some of the coping mechanisms authors can use to persevere during publishing?

AC: When I signed Dominicana, I signed How Not to Drown in a Glass of Water as a second book. Knowing this new book would get published made me feel freer to play with the form. I'm not sure I would have experimented as much if I didn't have an editor committed to my vision and who encouraged me to go wild on the page. I think the best coping mechanism is to nurture community. Toni Morrison said something like invest in your friends like you do in your education. I practice that. Investing in your community, a circle of care, will help you keep trying when you don't have the energy to do it for yourself. I think the idea that any of us do anything on our own is bullshit. We need each other. Lean into that.