“What am I Teaching With My Body?” by Cassandra Whitaker 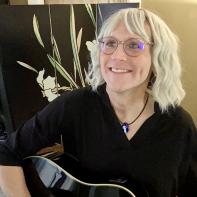 Cassandra Whitaker (they/them) is a trans writer from Virginia whose work has been published, or is forthcoming, in Michigan Quarterly Review, The Mississippi Review, Foglifter, Whale Road Review, Conjunctions, Evergreen Review, and other places. They are a member of the National Book Critics Circle.

What am I Teaching With My Body?

I am a body for the state. The state’s body. A body of a body of people that red states would regulate out of existence, my body, and those who do what they please with their body.

This is about living in the mouth of a wolf, a wolf so huge it is invisible against the moon. The first week of school, a hothead young male whom I had built a relationship with in the previous spring’s drama class, a vibrant young mind with anger issues, nearly got into a fight with another young man over a seat. Seniors, mind you, fighting over classroom territory. It happens more than you think, and usually evaporates with a bit of gentle nudging. But not this hot September morning, these young men’s bodies had coiled into a tight spring, ready to uncoil in my covid spaced classroom.

Wolf is institution. Wolf is inherited culture. Wolf is cross and stone. Wolf is never satisfied.

In the past when I intervened between student conflicts, before transitioning, my adrenaline jumped, and my body prepared to exert strength, however, after beginning HRT, my body’s response to conflict changed, shaking with surprise, and a wholly different reaction: run.

I hate breaking up fights. But my participation as an authority is expected. My responses had always been instinctual, intervene using my body to block, corral or restrain[1] and redirect, the violence against the body temporary, unintended, and never personal[2]. I never thought about my responsibility as a body until my body reacted differently; my body still shook hours later, long after the two males had given up on anger and become friends[3].

How long have I worked language for the wolf, in a class of bodies, unquestioning the wolfing hunger the wolf demands?

AMAB teachers are tools of the state. Wolf is institution. Wolf is inherited culture. Wolf is cross and stone.

There is a pernicious glamour about gender in education, one that promotes gender essentialism and one that, at least, some research pushes back against, that young men need male teachers and that more male teachers would help raise high stakes test scores, thus proving that learning is happening. On social media, gender crits and TERFS echo the glamour, the illusion, adding their own warmed-over patriarchal concepts to discourse. I'll give it to the TERFS, it’s an idea that feels true, emboldened by anecdotes, white Christian nationalism, and good old-fashioned American gender essentialism, we need men to shape our young boys into “the right kind of men”.

What am I teaching with my body?

Males should lead the males, after all what better way to assure their exceptionalism than to be taught, led and governed by a wolf.

Like so many arguments from the right, data evaporates all the bluster. Studies abroad and a study in Indiana public schools[4]revealed that despite social learning theories and popular conventional wisdom, same gender adults in the classroom do not contribute to higher test scores (Carrigton, 2008)[5]. However, researchers did find that gender contributes to work-related burnout, driven by the emotional and cognitive burdens of teaching students with discipline problems, another problem exacerbated by educational systems, emotionally leveraging teachers to continue to take on demanding work at their own expense. The data suggests that the state, consciously or not, thinks of the AMAB body as a tool, and not just for the test scores, for the discipline. Hwang and Fitzpatick write, “We find that boys with at least one suspension record in the previous year are 12% more likely to be assigned to a male teacher than boys without suspensions, whereas girls’ suspension histories do not predict assignments to male teachers." Furthermore, Hwang and Fitzpatrick cite an earlier study where "Parents and educators call for more male teachers in the classroom, citing their belief that male teachers can serve as disciplinarians" (Carrington &; McPhee, 2008; Francis et al., 2008; McGrath &; Sinclair, 2013). The wolf is in the data.

Overall, males comprise roughly 24 percent of the teaching force[6], and roughly, 40 percent of the nation's high school teachers are male, some 40,000 male bodies that could be put between male student bodies.

My interpersonal relationships confirmed this. At 6’2 my trans body is a brick; at the time of the fight I was still semi-closeted, out to only my boss and a few friends at school, and as the school year continued, despite looking more and more feminine, so many colleagues[7] would remark on my influence upon the young men in my classes, how so many had graduated and will graduate because of my positive masculine influence. So often that year, I was addressed as brother, and shoulder slapped as “the right kind of male.”

The wolf comes in on words. When you repeat the wolf’s lies then the wolf has already eaten.

Martin Mills, Malcolm Hasse, and Emma Charlton explored the cultural concept of the “right kind of male teacher”, a narrative meant to privilege male teachers, prop up the status quo, as well as function as a kind of cultural pressure, for male teachers are expected to conform, coach sports, act as an authority figure, enforce cultural norms, demonstrate emotional distance, and a work centered selflessness, traits and cultural expectations that denigrates the labor of female teachers, as well as ignores the emotional labor of education, which frankly is the elephant in the room. However, the reinforcement of white cis-het norms actually contribute to why males do not enter the workforce as elementary school teachers, for fear of being perceived as “gay”[8]

How do men respond to being the “right kind of male teacher”? Mills, Hasse and Charlton interviewed a young male, who “express<ed>; a certain degree of resentment” that at times he found that the imaginary teacher, the right kind of male teacher, was “required in certain situations in order to survive.” In other words, the young male teacher found himself in situations where he had to “man up”, or adopt a gruffness, a costume, a glamour, the wolf’s hide, just to keep the peace, to manage the classroom.

How often the wolf’s hide and the wolf’s voice hid me, in class, behind the wheel, in the yard, at home, in bed, in my body which hated me, the wolf. The year before, in the worst year of my sober life, in the middle of a covid-spaced class, blah, blah, blahing about Beowulf, I found myself falling backwards into my emptiness, a harrowing splitting of self, the dysphoria voice inside counting off every coping mechanism that animated my body, deepened voice, restrained hand gestures, straightened hips, all while I blathered on. I snapped back into my body and performed, because that was the lesson I learned. A body performs for the spirit.

It’s ongoing, the relearning of my unrestrained and happy body. When bodies come together a body can change the energy in a room. Reorienting[9] one’s body and one’s schema of self to exterior forces is a familiar and often exhausting process for transgender people. Be it a reorientation to allyship or transphobia, or cognitive overload due to health protocols, or state tests, or admissions tests, or the educational industrial complex standard of the week, or a local initiative, or student trauma, or family trauma, reorientation is a given. Reorienting towards softness requires softness; everything the wolf desires to flesh.

After that near-fight, I told my principal I wanted out of the body discipline business, and she, without missing a beat, said, “Done. Do you want to talk about it?” The only way to live in the mouth of the wolf is to pretend to be a wolf among the teeth. To feed at the mouth. But I was no longer a wolf.

“I appreciate your emotional honesty,” she said. “Make that a habit this year.”

It’s an ongoing process, transitioning, re-orienting and ever growing, my feelings about my changing body changing daily, and my body’s lessons, and those of the wolf, and those of love, how to stand, how to exist as a body in the mouth of the wolf so big you can’t even see it.

What are you teaching with your body?

[1] Before the state codified behavior, AMAB teachers were encouraged to hold a student, usually by the shoulders or upper arms and redirect them to the office. Now it is a complex hands on and hands off practice that requires practice and coaching to remotely ever remember in an emergency situation.

[2] Before transitioning, I had been knocked down in a conflict, and I’ve been pushed over a computer table (I sailed right between two computer monitors, I am told, my feet neatly clearing the Dell monitors which rested like a castle’s merlons on the table), and I’ve been slapped and pushed away, and I’ve been cussed. Not that big of a deal, really.

[3] The students eventually worked their conflict out through restorative practices, ending in a rather Dead Poets Society moment, with the drama kid standing on a desk and apologizing to the entire class about his behavior. The restorative practices implemented by the principal dissipated the foul humors rather quickly,

[5] Carrington, B, Tymmns P & Merrell C. “Role models, school improvement and the “gender gap”: Do men bring out the best in boys and women the best in girls? British Educational Research Journal 34/2, 315-327

[7] Christian cis conservative types, which didn’t surprise. My only surprise was how the pervasiveness of this glamour persisted in my small, rural school (you could put us in your pocket). Christian identifying individuals used heavily gendered language, brother, father, uncle, etc., emphasizing the gender not the character of the relationship was crucial. The wolf comes in on words.

[9] Hil Malatino “Side Affects: On Being Trans and Feeling Bad”, University of Minnesota Press, 2022.

‹ "The Balcony In Three Acts" by Carlo Rey Lacsamana up "Ouija Board: What We Ask of the Dead" by Kaia Preus ›