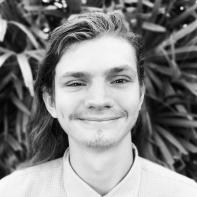 Hunter Thane Therron currently lives in Hanoi. His debut chapbook, Whitewater Blues, was published by Zoetic Press this past August. His poetry and fiction appear in the Little Patuxent Review, Really System, Levee Magazine, and others. In March, he will attend a residency in Finland after mining gold in Australia.

In Paris, Iowa in 1961 there was a group of kids in a cornfield who worshipped youth.

Like a sickness, the idea had fallen on their town.

It leveled them. Pressed them against their mattresses, and made their fingertips rattle with electrocution.

They were each exhausted at school, shuffling around like zombies, and still they couldn’t sleep.

A month before the meeting in the cornfield, there was a corrugated metal roof salesman who passed through town.

He sat at Denny’s every Friday night and attracted an audience with his magic.

He pulled a goldfish from behind a blonde girl’s ear, and guessed the birthday of each person in the diner just by reading their palms.

His name was Raymond.

He ate only bacon, orange juice, and hard-boiled eggs.

Some nights, you could hear him camped out in fields in his car, drinking absinth and howling.

Meanwhile, Pastor Williams was maddened by his wife’s cancer.

He preached about Rapture, Pale Horses, and Solomon’s split child.

He sweat on the altar, veins bulging from his neck as his voice rose to the desolate vaulted ceiling.

As the pastor’s wife was dying, the salesman picked bits of bacon from his teeth and rambled on about the places he’d been.

Or, how in Varanasi men with massive, knotted hair crouch on the streets naked with their faces painted white and call themselves children of God.

He said that in Zurich a cream cheese bagel costs fifteen bucks, and that in Bangkok you can watch a woman smoke a cigarette out of her you-know-what.

None of the kids knew what.

They could only imagine the colors and smells of the packed bazaars and empty desert valleys through which Raymond had walked.

They sensed it with the special part of their brains that hadn’t yet fallen off and died.

Especially with Joan of Arc, how Raymond said she rode through the scorched fields of Eastern France on a white horse at sixteen, speaking in tongues, waving spears, and leading an army of thousands of men marching to a beating drum against liver-faced English South the Seine River.

From February on, the kids called each other Joan I and Joan II. They met in the big weeping willow by the Fox Reservoir and traded prophecies, Pokemon, and visions. They memorized French watersheds and mountain ranges while dangling their legs from the skinny top branches.

They cursed each other’s pale skin, and threw rocks at the fat, lazy sun as it split the sky in half.

She dropped random jars inside, whispered to herself, and stared ahead at nothing.

She smelled like bleach, and her varicose calves were covered in tiny, red ulcers.

She limped to the seed rack just before the register, and carefully picked out a tiny packet of pumpkin seeds and dropped it into her cart.

It was December, and she would never live to plant them, and that was the thing that drove Gabs mad.

He ran home, and gathered up a massive heap of scrap wood, which he and his sister, Sybil, hauled out into the clearing in the corn.

The next day, Gabs called the meeting, and at 3:15 AM, all the kids lifted their windows, shimmied down their trees, and met by the big willow from where they slunk together, thirty in all, down the dark county road.

In the clearing, Gabs doused the wood in gasoline.

He struck a match, and the fire shot up to life.

The children ran around the flames. They wretched their necks up to the low purple sky as passing headlights pressed little yellow shapes through the gaps in the corn.

Gabs rolled on the ground in his whitey-tighties.

Sybil spoke in tongues, and streaked her face with mud.

A group of second-graders hunched in the corner and held each other and sobbed.

Sybil saw Martha’s ghost wandering around in the shadows.

Gabs shot up and threw his hands over his head.

Help us!, he cried. Help us in the morning! Save us here, save us now!

And the crickets screamed over the watery calls of far-off coyotes.

The fire died, and half the kids scurried home through the dark corn.

But Gabs and Sybil lead thirteen others into Memorial Park where they killed a goose in the pond.

Sybil was a good shot.

She found the roundest, smoothest stone.

She arched it from two hundred feet away, and it careened back down, cracking the goose in the center of its neck.

It thrashed back and forth, attracting the others.

Those little shapes fluttered around each other in the black water, chopping up the smooth reflection of moon.

Sybil knew that geese are monogamous, but then she didn’t care.

They ran to the elementary school, and wrote MOTHERFUCKER on the glass front door.

They slunk around back and tagged CANCER in big scrawling black letters on the principal’s parking spot.

They wrote AIDS on a dumpster, pitched the can in the gutter, and sprinted home at dawn.

The next morning they woke up in their soft beds and went to FUCK school and saw Principal CANCER and felt empty.

Everyone lived their lives.

And, now, twenty years later, Sybil barreled West towards the lights of Denver that opened up before her like an MRI brain scan.

She massaged the teenage boy’s thigh as he sat in the passenger seat, popping his pimples in the rearview mirror, while half her white satin dress flailed out from the open driver’s seat window.

Her stomach growled. She looked at the boy, her new husband, all blonde, his braces still on, and thought once again of the goose.

It sat in the pond for months after it died.

The water had frozen and thawed around it as Sunday families passed in their thick wool coats while marching home from church.

Just then, Sybil wondered if they ever stopped to notice the tiny gray ball huddled up through the storm with its beak cracked open.

So cold and so god-damn patient.

Did the people pray, or did it hurt their teeth to watch?

‹ "The Dirt Beneath the Concrete" by Gage Saylor up "The Course of a Marriage" by J. M. Jones ›