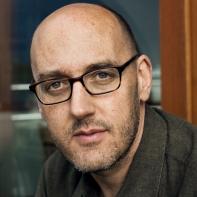 Ben Marcus is the author of several books, including The Age of Wire and String, The Flame Alphabet, and Notes from the Fog. His stories have appeared in Granta, Conjunctions, Tin House, The New Yorker, and The Best American Short Stories, among other venues. Among his awards are a Guggenheim Fellowship, The Berlin Prize, a Whiting Writers Award, and an NEA in Fiction. This year he is a Cullman Fellow at the New York Public Library. He lives in New York with his family, where he is on the faculty of the School of the Arts at Columbia University.

“Certainty is Such Folly,” an interview with Ben Marcus

This interview was conducted via e-mail by Interview Editor Alex Tallant. Of the process, she says, “Notes from the Fog evoked such intense emotions while reading it, which is always a delight to encounter in a book. I was taken on a journey through each story and became fully invested in the characters in such a short amount of space, a feeling that Ben Marcus’ writing accomplishes easily and without forewarning.” In this interview Ben Marcus talks about writing short stories versus novels, bleakness, and experimentation.

Superstition Review: You have written both a full novel as well as short story collections; which mode do you believe lends itself better to your writing process, and why?

Ben Marcus: I am working on a novel now after several years of exclusively writing stories. For me, with a novel, there is just much more that is unknown, that can’t be known, that can’t be decided. To a degree the same can be true with a story, but I am in the early stages of a novel and I don’t know much. That can be exciting or unnerving. But I think that I like being in a situation that feels difficult or less familiar, because it pushes me to think differently and to try things I might not otherwise try. I suppose in some way I don’t want the process to feel too familiar because that seems to have less value. Another obvious difference is that it’s easier to get a sense if a story is worth pursuing, or just generally worthwhile, whereas with a novel I fear I could spend years on it before realizing it’s a bust.

SR: Much of your work deals with dark themes and often confronts the reader with harsh realities, such as isolation, desperation, shame, and death. How do you tackle these forces when writing, particularly in the early stages?

BM: Well I guess these territories seem more potentially dramatic and complex, and therefore more interesting to try to write about. These states of mind and conditions are real and pervasive and literature has always, as I see it, looked to connect to us by dramatizing what is difficult about being human. I think that the challenge is that bleakness can feel overwrought and flat and obvious, just like any other tone. It can feel forced and willed, and that’s a disqualifier for me, so I try to avoid that, but at the same time I don’t want to bore myself. Whatever I’m writing has to interest and intrigue me, and maybe more importantly it has to exude a kind of mood that feels worth exploring. This is all sort of vague—I don’t usually think about this stuff in such specific terms.

SR: In an interview with Huff Post you stated, “Certainty is a powerful turn off for me.” In Notes from the Fog, it seems like many (if not most) of the characters are working through some sort of uncertainty; did this arise from a deliberate decision to depict the presence of uncertainty in the human condition, or did it come naturally through writing these narratives?

BM: I’m not sure where it came from. I should probably try to depict more certain characters, come to think of it, because certainty is such folly and folly is probably as good a character trait as any.

SR: In a piece for Granta magazine in which you had a conversation with George Saunders, you said that as you write a story you look to see what rouses you, but that this also “presumes that what strikes or moves” you will do the same to others. What compels you to continue writing in a way that feels right to you?

BM: I know no other way. In a social situation, you see how people react to what you say and you can constantly calibrate it based on their reactions, if you want to—you can also turn into a paranoid mess if you obsess over how other people see and react to you. In writing you are alone, and that’s what I prefer. I have to reach some kind of half-dead attention span in myself first. I have to be entertained or interested or intrigued or mortified—whatever.

SR: While perusing your website I came across the interview questions that you sent to David Markson that were, unfortunately, never completed. However, one in particular stuck out to me: “Does the word experimental mean anything to you?” Your writing is often described as experimental, so what exactly does experimental mean to you?

BM: Sometimes it means a territory I may have forsaken. Other times it looks like the promised land, a space in language and fiction worth fighting towards. Experimental fiction has many guises, and many different aims, as far as I can tell. At least sometimes it’s an antidote to the artistic timidity and conservatism one encounters with some work in the literary world, but that could just as easily be couched as resentment towards writing that has found a larger audience. If fiction is art made with language, then we should be more open to narrative variety, formal adventure, etc. But if fiction is a vacation from real and often difficult feelings, then experimental fiction is a huge downer. So I don’t see a stable definition, and I don’t think there needs to be one. I like to think that interesting and innovative work will be defined by writers who look out at what’s been done and feel compelled to do something that’s not in the world yet. That’s also the kind of work that I most want to read.

SR: Is there anything you can reveal to us about the new novel you’re working on?

BM: This would be foolish, because it’s changing quickly, thank god. Or, I should say, it tends to disappear a bit more every day. I tend to have ideas and plans that only obstruct what the project might become, and to declare what the “idea” is would only be to tell you definitively that the final book will have little to do with what sparked the thing in the first place. I hope this doesn’t sound evasive. I just have no real clue what I’m doing. I’m lost and confused, but I sort of value that state, because it makes me work very hard and sort of desperately.

SR: You said that you have to get to a kind of “half-dead attention span” in yourself when writing; what does this space look/feel like and how does it drive you?

BM: It’s boredom, which isn’t pretty or vivid, and which, frankly, bores me to even try to describe. It’s ugly. If I don’t care, and am not engaged, then I see very little reason to continue. Writing is a massive act of delusion in the first place. You have to nurture a fantasy that someone might give a shit. For me, that someone has to first be myself, and I am congenitally suspicious and dismissive of my own efforts. So as I try to work around that, and outsmart myself, I can get closer to something that I care about. It’s a bit of a ritual, and maybe full of problems, but it’s how I tend to go about things.

SR: In what ways does exploring the unknown and leaning into the unfamiliar excite you, both as a writer and a reader?

BM: Well, I am tired of what I already know and what I already think. I spend too much time as it is with my own thoughts, and these tend to run in familiar loops. I have a boring and repetitive mind, but I’m stuck in the audience and can’t really get away from it. So I guess I can privilege novelty, even if that has its own problems. I just crave new thoughts, new feelings, new approaches—because I can feel a bit more alive when I find them, as a writer and as a reader.

This year I have an office at the New York Public Library. It’s a small room with a high transom window. The desk covers two walls, and there are several lamps, because I get no natural light. I have been thinking about doing some decoration, but it’s mostly a theoretical project so far.