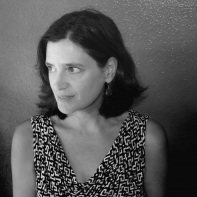 Carolyn Guinzio is the author of six collections, most recently How Much Of What Falls Will Be Left When It Gets To The Ground? (Tolsun Books, 2018) and Ozark Crows (Spuyten-Duyvil, 2018). Among her previous books are Spoke & Dark (Red Hen, 2012), winner of the To The Lighthouse/A Room Of Her Own Prize, and Spine (Parlor, 2016). Her poems have appeared or are forthcoming in The New Yorker, The Nation, Poetry, Harvard Review, Bomb, Agni, and many other journals.

Here is the hook that unbent
when the door creaked open:

a deathbed conversion, a version
of which occurs early. The postulant's

settled in the bottom of a bottle-
green bottle of wine. I don't take

your meaning, said he, thinking
the green was meant for his father,

crooked, weakened and mean.
But rewards deferred, if before

unimagined, were earmarked for
him. Lemon-sized bluish birds

circled his mop, youngish, yellow
(as in yella), but eyes and teeth not

yellowing yet. The frame through
which eternal contemplation lay

was set before his bent form.
All he wanted was for the world

to keep it down, because his head
hurt. He reached deep into his ear

and gently worked his mind out
through the miraculous canal.

He shoved it through the threshold,
and the silence enveloped the sound.

It arrives by the power vested in
splintering a duck out of the sky.
It arrives with the force of a thing
moved by force. It comes via cutoff,
No Access, No Outlet, No (the sign
says) Turnaround. It finds its way.
It turns around, leaving circular
streaks that spell O. It breaks into
the skin with a spark, plunging off
the stick onto the back of the hand.
It doesn't need sound. It doesn't tell.
It shows, O being shapely and plain,
unsurprised. It marks the beginning
and wants no part of the end. It burns
in the mind, in the back of the mind.
It shoots into a groove deep in the ever-
shifting gray—the congregant roads,
the flashing, muttering walls—a bright,
flaming file marked Do Not Open Until