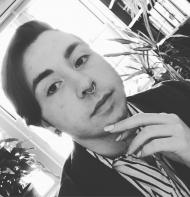 Robin Gow is the author of the chapbook HONEYSUCKLE. They are a queer and trans poet, editor, and educator based in the NYC area. Their first full-length collection is forthcoming with Tolsun Books Fall 2020.

This work depicts a red girl with a red balloon in a red dress with red painted finger nails and red eyes and red hat and red strawberries. Or, maybe this is a picture of Mars falling asleep. Or, maybe this is a self-portrait of the artist all in red. Maybe inflection in your voice doesn’t matter. Maybe there’s something more to a tape recording than just the cycling of the film. Have you considered that this could be a painting of you, viewer? With your two eyes and your two mouths and your two fangs. Have you considered that this is the photograph your mother was talking about—the one she could never find. The one she tore apart the whole attic for saying, it has to be here it has to be here. Yes maybe this is that photograph. She is young. She is full of sequins and magma. She is waiting for someone you can’t remember the name of. You should have listened more closely. You should have been the good child but you were full of embers. You were whispering smoke. This is as you thought originally, a portrait of you.

Girl by the Water

Using her/his/their own hair the artist has created a wave pattern that suggests both the girl and the water. She is a river as well as a girl. Because, as we all know, all girls are rivers at least in their first years of life. I, in fact, spent a good few years being a great huge river that no one wanted to step out on though I wasn’t made of hair. Yes, this is about the art though, not about me. This is bold. The nail polish in the hair suggests nails which suggests dead pieces of the body—how the hair was once an organ and the nails were once bone. Will she jump in the water? Maybe. You be the judge of this.

All the clothing of every women you’ve ever know and several thousand that you haven’t. This dress could have been your mother’s and this one might have been your sister’s only you never had a sister as far as you know. A tree made of clothing—of girls. All the girls’ bodies are somewhere else but their circus is here in lace and shimmer. A project in memory. Does this collar remind you of a babysitter? Do these stockings have holes from you digging your pencil into your thigh? This is certainly the hat of an old woman who used to walk up and down the street by your house. She is part of the piece now, ambling between arms of fabric.

‹ A Poem by Monika Zobel up A Poem by Tommy D'Addario ›