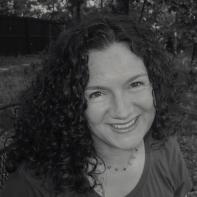 Angie Macri is the author of Underwater Panther (Southeast Missouri State University), winner of the Cowles Poetry Book Prize, and Fear Nothing of the Future or the Past (Finishing Line). Her recent work appears in The Carolina Quarterly, Harpur Palate, Jet Fuel Review, Lake Effect, and New England Review. An Arkansas Arts Council fellow, she lives in Hot Springs and is teaching at Hendrix College.

The crown was lost in sand,
rose gold in the ancestor of glass,
and sand filled the circle like a head
while holding it in its hands.

The city burned sky without words,
the brand pressed to its thigh
having been styled through iron
into a shape that set it apart

from the rest, in this case, towers
without names on their sides,
but all knew they were called fire
and flame. The sun seemed lower

for a time until they realized it ran
its fingertips down the city’s panes
without leaving prints. Their hands
so dry, oil gone, slipped in the sand.

Right before dawn, the dog
cried in its dream, so the child
put her hand on its side
and said its name. She then fell
back asleep into a loose box
of her own dreams, lined
with running fast, faster than ever
and anyone. Dust rose to turn
her legs white as bone, and still
she ran, the rest far behind.
Come on, she yelled. She ran
into the forest over roots
until she found herself in a place
she didn’t know. A winter sparrow
called, already there that fall,
saying what some took
as a man’s name, something
she could never hear. As much
as she tried, it didn’t sound
like any words at all.
Days when she walked
with her mother and the dog,
her mother pointed them out:
white-throated sparrows, a bit
of gold by their eye, come
all the way from another country.
Her mother told her of the sparrows
she knew in winter as a child,
white-crowned, without a song
she could recall. Listen, she said,
and they followed the sound
with their eyes to the sparrow
breaking apart the weeds
to what it needed with its mouth.

The people formed an apple
and made a snake from jade,

creating a myth that they forgot
quickly was a myth, and then

forgetting the myth itself.
Spring, the herons were flying,

great and blue around the city.
Or was one a kite?

It seemed to have a string
connected to the earth.

The father swore yes, the mother
not, and their daughters

thought it was a real bird holding
a string, to take to make a nest

or just a find, uncertain.
They stepped over the dead snake

brighter than any body should be
as they walked the road in the evening.

Spring, the price of apples
was rising but still a favorite.

I knew someone who ate the core,
stem, seeds, and all, the mother remembered,

but she couldn’t recall who, or when,
and had never asked why. They agreed

that seemed like overkill. All she asked:
they eat to the core, and the skin.

Opened all the gates on the dam
and still the water rose. This is control
but with so much rain at once,
you do what you can.
The people drove through water
like a dream, wheels spinning
and not a bit of gold from straw.
The phones went off, alarms in unison

even when on silent, and the students
raised their eyes to each other,
unsure what they should do
or if they’d catch hell from the teacher
for the emergency alert they couldn’t control.
But her phone had gone off, too.
The school with its flat roof
bore the added weight

as did the forest crown. The roots
took all the water that they could.
The rest ran down, rocks swept along.
The corps assured the press
they were monitoring the flow.
The spillways wore thick lace
as old gowns women once had to wear
to cover their bodies neck to toe.

‹ A Poem by Adam Houle up Two Poems by Brooke Sahni ›