"Men in the Computer, II" by Leonora Desar 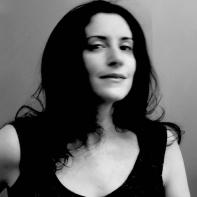 Leonora Desar's writing has appeared or is forthcoming in River Styx, Passages North, Black Warrior Review, Mid-American Review, and Columbia Journal, where she was chosen as a finalist in their winter 2019 fiction contest, judged by Ottessa Moshfegh. Her work has been selected for The Best Small Fictions 2019, the Wigleaf Top 50, and Best Microfiction 2019 and 2020. In 2018, she won third place in River Styx's microfiction contest, and was a runner-up/finalist in Quarter After Eight's Robert J. DeMott Short Prose Contest, judged by Stuart Dybek, and Crazyhorse’s Crazyshorts! contest. She lives in Brooklyn.

There was this man I knew. P. That may or may not be his real name (it’s not). We met in my computer. There was this room: Nerve.com. It was where all the cool people went. I wasn't one of them, but for some reason they let me in (I may have bribed them). And there was P. He was dark and handsome—he may have even been in black and white. I, on the other hand, was all color. This is what the Uncool have to do; you have to be as loud as possible to get attention.

Eventually P. noticed me. He said, who is that weirdo and why is she quoting Nabokov. Truth be told, I wasn't even crazy about Nabokov, but I thought it was something the cool people did, especially the writers. In any case, we met, but first we wrote each other a bunch of letters. Every week they'd get a little longer. Before you knew it, I’d used up all the storage on my hard drive. I bought more. Now I had a Tome. It was basically me using big words to impress P. and sometimes talking about my life—also in big words. His words were smaller and more perfect. He always picked the right ones. This made me want to keep writing him. Eventually, this is all I did. I went to work, but really, I was writing P. Here is this file—"the moon is so very bright.”

Now there weren't just letters—there were plays, skits (about pee no less, you probably don't want to know), one-act screenplays. These were mostly on my side. On his side there was his day, his favorite books, music. My side was decidedly more interesting, but this didn't deter me. I was having a fabulous relationship—with myself. Eventually, P. asked if I wanted to meet. Ok, I said—I wondered what it would be like? Would we speak in poetry or verse? Would he bring his Day? I wondered how it would all fit in his backpack.

We met, and as you can guess, it was not the same. I said, here is this play, and he told me about the Yankees. He liked them. They were awesome. I tried writing a play about baseball, but it was hard. It was hard to hear him. Eventually I excused myself. I took my phone out. I began composing an email, a mental one. I described the bar, the table, even P.—how he looked different in three dimensions. It was hard wrapping my head around it, but I wanted to, badly.

When I came back, he was still there. It was kind of amazing. I kept expecting his avatar, for him to return to black and white. We went out and walked (and walked) and somehow that walking lasted for years, and then it didn't. The best part of the relationship had already ended. It was still in my computer; there was a little P. and a miniature me; they were writing love letters and now they were getting it on and now they were getting married—meanwhile the real P. and I were breaking up.

I wanted to give him back his scent. I’d imagined he would smell like a silent film, but he didn’t. He was all color. I wanted to say, why don’t you smell like a 1920’s silent movie or at least like Ricky, from I Love Lucy. He smelled amazing (I imagine). Instead, P. smelled like hotdogs, like Yankee Stadium on a crowded Sunday afternoon. He smelled like the moment after the stadium emptied out, when it was silent, when all hope had been lost. I wanted to give him back his scent. I wanted to reach through my laptop and pull it out, but I couldn’t; my laptop was gone. And he was here.

Sometimes I wonder what little me and little P. are up to. Do they have kids now? Are they celebrating Thanksgiving? Does he let her cook and pretend to like it or have they gotten to that point where he admits how bad it is and orders take-out? Do they eat it silently? Sullenly? Does little P. teach our little boy how to catch a fastball? Is he darling and blond and exactly the type of boy I could never make, quiet, loving, sweet, but that somehow came out of me, as if by some magic grace?