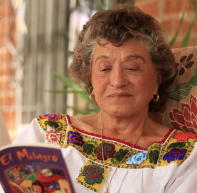 Patricia Preciado Martin, a native Arizonan and lifelong Tusconense, is the author of three collections of oral history and three collections of widely anthologized short stories. Martin is the recipient of the Arizona Humanities Council Distinguished Public Scholar Award of Excellence. She met Jim, her husband, while serving in the Peace Corps in Central America. They live in Tucson.

“Our Grandmothers and Great Grandmothers Were More Than Just Putas,” An interview with Patricia Preciado Martin

This interview was conducted by Mindy Jaffar in the home of Patricia Preciado Martin in Tucson, Arizona. Preciado Martin’s oral history collection, Songs My Mother Sang to Me, is an authentic look into the lives of ten women who describe their great grandmothers, grandmothers, and their own upbringing in rural Southern Arizona. In this interview, with humility and grace, Preciado Martin discusses her journey in collecting oral narratives and describes the rich and loyal connection to the land.

Mindy Jaffar: What inspired you to begin collecting oral narratives?

Patricia Presiado Martin: I started with collecting folktales from Tucson and something interesting happened that changed my life. I would ask people to tell me about the legend of the Devil in the Carillo Gardens and they would answer, “Okay, but first let me tell you about my family,” or “I was descended from Antonio Comadurán who was the first captain of the presido,”... and I thought “Wow, when I was at the university we studied continental Spanish, Iberian Spanish. We didn’t have any courses in Chicano history, Mexican American history...nada (nothing). We studied about Spain but not our own heritage. So I learned about Tucson’s history, but it was everybody else’s history. I thought, “I really have something here. These people are telling me the story of my heritage.”

MJ: I really enjoyed Songs My Mother Sang to Me. How did you come to write strictly about women in Southern Arizona?

PPM: I went to a library conference at the Westward Look in Tucson with my sister because we both are interested in books. At that time, I was already a published author and was serving on a panel discussion. There was a man there, a very wealthy farmer from Sonoita, which is a land grant and, if you don’t mind me saying, a white enclave of rich ranchers. It was actually a land grant to the Romero family. This rancher is so wealthy, he owned a big ranch, a publishing company, and he published this book of poetry. He got up and read an excerpt of a poem about cowboys going to Nogales, Sonora with fancy watches and the next day all the putas (prostitutes) in Nogales were wearing these fancy watches. I was incensed...furious! I didn’t say anything because I didn’t want to embarrass my sister, but I sat there and thought, I am going to prove you wrong. We were more than that. Sure they were all kinds of ladies of the night and it wasn’t just Mexican women in Nogales, Sonora. I know about a lot of women that lead honorable and creative lives, lives that contributed to their community and by damn I’m going to write a book about it. And that’s how that came out, so I am going to find my women and I am going to show the world that our mothers and our grandmothers and our great grandmothers were more than putas.

MJ: Tell me about the process of collecting these women’s stories and the journey it’s taken you on personally?

PPM: I started by asking friends and some people I already knew from church and some I met along the way of my career. A lot of it was through word of mouth. I interviewed women who were ranchers, women who built their own homes, who broke horses, and some who were midwives. It wasn’t just the story of the women themselves, they told me stories about their mother and grandmothers. I wanted to focus on women’s work. Not necessarily work outside of the home but on the ranch where they did heavy pulling, broke horses, and built fences and houses. You wouldn’t believe one woman’s story in Images and Conversations. It wasn’t work the way we define it today; going to the office or any superior position such as a pianist or journalist. It was work! So that’s what I focused on in Songs My Mother Sang to Me.

MJ: Why do you think the love of the land is so rich in Tucson?

PPM: It’s the heritage and connection. I don’t think that we love the land any more than others love their land, it’s just that our history isn’t told. We may not have been the first ones here, but we were here. A lot of us are mestizo (mixed blood). We were mixed with Indians. We have this double heritage and everything I read doesn’t mention us and I’ve asked, “why don’t you say our names?” So, that’s what I’ve done.

MJ: The stories are told in first person narrative. What led you to structure your oral narratives this way?

PPM: I did that consciously because it is their story. I do it in all my oral history books. When doing oral history, it’s important to maintain the voice of the person and that’s what I’ve tried to do. It is their voice and each voice is different. I would like to think you could hear each woman in their own voice.

MJ: Each narrative is accompanied with a song that is important to each woman’s story. How did songs become the cornerstone of this collection and do you have a favorite song?

PPM: It was a symbolic title to me. Stories are songs and every story is important.I know one thing for sure, you can knock down our buildings and our institutions, but you cannot take away our stories. The stories, like Mexican corridos (folk ballads) have a certain lyricism and evocativeness for songs. When I gave a talk to a retirement community, I started giving my blurb and a woman said, “I thought you were going to sing.” They thought I was going to bring my guitar and my sombrero. And I said “Well, no, not exactly. That’s just the title of my book. I do have a favorite song from the book, written by Livia León Montiel’s grandfather and it’s called La Rosa. I used to know it by heart and I sang it for Livia from time to time. It talks about the frailty and femoral nature of life. In this sad life everything is finished, everything ends and that’s why I call it songs. They symbolize our story.

MJ: I’m an Anglo woman who did not experience life in Southern Arizona yet I could taste the food and feel the curandera’s healing. These stories were so well written and the descriptions were extremely rich that I felt as if it was my story. Have you heard this from your other readers?

PPM: My career has spanned over 30 years and women, not only Mexicano women, have a lot in common. We are basically an agrarian society but this is the heritage of many women just maybe further down their lineage and people identify broadly, not necessarily with a particular culture. Once I was speaking at a book club and an Anglo woman came up to me and said, “I love that story about the tortillas because I always felt the same way about my mother’s strudel. I could never make strudel as good as my mother.” So food and family traditions is something other women identify with too.

MJ: Lastly, in your Arizona Latina Trailblazers interview you said that your career in collecting and publishing oral narratives has become your manda (a calling). Will you explain what that means to you?

PPM: A manda—from the verb mandar in Spanish, which means to command—is something that comes from within you, a passion. A manda isn’t just religious, it can also be that inner thing that commands you to go forward with your life’s work. This has become my purpose and passion.