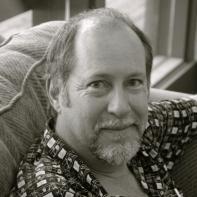 Gary Short is the author of three books He has received a NEA fellowship, a Stegner fellowship at Stanford, a residency at the Fine Arts Work Center in Provincetown, and a Pushcart Prize. He has taught at several universities, most recently at the University of Mississippi and in the Drew University low-residency MFA program. He has new work in American Journal of Poetry, Diode, Juke Joint, On the Seawall and Terrain. The London-based band, Wovoka Gentle, take their name from the titles of two of his poems. He lives in Panajachel, Guatemala.

Is the moment you see the beautiful thing
< or > the later recollection of it?

Gentle poet John Clare was said to be “mad,” which meant
He had no immunity to the world’s sadness.

An essay I read recently stated, You can’t feel tender
Toward an absence, & I thought how tenderly I disagree.

All the days I don’t recall. The months, the years
Blur. But there are moments I remember vividly.

Reading LiPo at midnight, We’ll meet again in the Milky Way.
I call it a day. Turn off the light & switch on the dark.

Listening to Opus 18, no. 3, when there’s a space
Between the notes, I think I hear Beethoven breathing.

Graveyards are where the living go to haunt the dead, but I know
A cemetery in Nevada so lonely that even the ghosts have gone.

It would seem it is possible to dream and die at the same time—
We know that death goes on, but what of the dream?

Silence idles in the pines.
Such quiet persuades one to be quiet.

Then there’s DuFu: We talked about our lives, about loneliness.
At the mountaintop, in the fog, we couldn’t see our own feet.

I dreamed Virginia Woolf in my kitchen humming a simple melody
While slicing thin wheels of lemon for green Chinese tea.

I like words inside words: the love inside glove, the art in heart.
The age inside page & sage, the kin within skin, the ouch in touch.

The day as gentle as John Clare’s sparrow. The sparrow’s name was
Tom; he would come when called & perch on John Clare’s finger.

Have you ever stolen a rose? And if so, did your heart beat
Faster as you took the flower, faster as the stem broke?

I sat there for a very long time, waiting
Like Sir Isaac Newton for something to fall.

And as Nabokov reminded us, only one letter
Divides us from the comic & the cosmic.

Two cardinals perched on a pine limb looking like
The logo of the St. Louis baseball team.

But I had some regrets: that I didn’t purchase
The thrift store harp, the red wine I spilled on the white carpet.

The flowers in the garden as colorful
As Jackson Pollock’s paint-spattered workpants.

I’m fond of Nabokov’s sentence, Mark felt
A sort of delicious pity for the frankfurters.

There are more people alive now than all who have lived;
That is, the number of people living is > all who have died.

Keats took only one sheet of paper when he went to the garden to write
“Ode to a Nightingale.” He didn’t know it would be a four page poem.

There are worse things than your favorite star turning out
To be Venus. It might be an airplane headed to Las Vegas.

At the end of Bertolucci’s film Dreamers, Edith Piaf
Singing in the most regretful voice that she regrets nothing.

Quantum physics suggests that every possibility
In the universe already actually exists.

Once I was poor & white & drove a car with a busted taillight &
No tags & not once was I stopped by a cop drawing a gun.

Just like those things seen in the rearview mirror, the past
May be closer than it appears to be.

The obit headline for astrophysicist Geoffrey Burbridge read,
Man Who Proved We Are Stardust Dies.

George Zimmerman sold the gun he used to kill
Unarmed Trayvon Martin at an online auction for $250,000.

And where in the world is the hand-winding watch
That Einstein always carried in his breast pocket?

The many things in this world that I do not want,
Said Socrates, twenty-four centuries before Walmart.

The rich cheat the poor more than the poor cheat the rich.
This is a mistake that I suspect will repeat. And repeat

I swear I just heard songbirds in the pines
Riffing off of Miles Davis’ Kind of Blue.

The wind remembers & blows in the same way
That Homer heard it, even if he never existed.

If you are poor & have a toothache,
It will throb with all the worries of the world.

Dust is to wind as rust is to rain.
To forgive & forget; or, to remember & forgive.

The names we thought etched by a chisel in stone
Were written with wind & rain.

A spiderweb shaped like a sestina.
On a train in Spain, dreaming toward the sea.

How the wind sounds like the river that isn’t here.
Sway & regret. As if the wind could remember.

The mood of the afternoon
Is a paragraph stolen from Proust.

I watch ants unhinge the bead eye of a dead sparrow, bit
By bit, & carry it, glint by glint, to the queen.

Look hard, life is soft, is a line by a poet named Peacock.
I often get it mixed up—Look soft, life is hard.

…and if the world has no experience at being you?
The mirror gazed at me, but I looked away.

Most of the time I can’t resist a detour or diversion
(Much of my life is made up of parenthesis).

Because it was Philip Larkin, I misread the line, “Courage is
Not scaring others,” as “Courage is not scarring others.”

A photo of Cy Young (1916) warming up to pitch one of his 511 victories.
Everyone in the stadium that day is dead. How many wins do you have?

Success following success is not as interesting
As failure & then success.

‹ A Poem by E. Kristin Anderson up A Poem by Grant Clauser ›