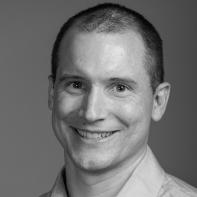 Tom McAllister is the author of the novels How to Be Safe and The Young Widower's Handbook, as well as the memoir Bury Me in My Jersey. His short fiction and essays have been published widely, and have most recently appeared in Best American Nonrequired Reading, Hobart, The Rumpus, Buzzfeed, The Millions, Juked, and Pithead Chapel. He is the co-host of the weekly podcast, "Book Fight!" and nonfiction editor at Barrelhouse. He teaches at Temple University and lives in New Jersey.

The tornado siren stood a tenth of a mile from my apartment, so I always knew when we were in danger. For most of my two years in Iowa City, my friends laughed at my fear, but that didn’t stop me from googling tornado survival tips at night. Back home, I’d experienced a couple of earthquakes so minor that some people never noticed them, some heavy rains from dying hurricanes, and a number of blizzards and ice storms. These events could be inconvenient, but they never threatened to kill me like a tornado would. Everyone in my MFA program repeated the conventional wisdom that the Iowa River was a natural protection against tornadoes, which allegedly couldn’t jump over water. They said it often enough that I think they believed it, though it was obviously wrong. Feeling safe sometimes means forgetting the facts and embracing the right set of comfortable delusions.

One night the sirens wailed and kept wailing, and on TV they showed a map of Iowa’s counties with every block in the southeast corner colored a deep red. The meteorologist said people in Johnson County should seek shelter immediately. I texted LauraBeth, my girlfriend a thousand miles away, to tell her I was afraid—she’d stayed on the east coast when I moved to grad school, and we were now both counting the days till I could come home—and then I sought shelter. I’d read that one option for sheltering during a tornado was to lie down in the bathtub with a mattress over top like a lid on a stock pot. I put some snacks, a can of beer, and a battery-powered radio that my mom had mailed specifically for this situation into the tub and then dragged my mattress from the bedroom. The bathroom was so small my mattress didn’t fit through the door. I left the snacks, beer, and mattress and decided to go to the building’s basement with my radio instead. My neighbor across the hall opened his door at the exact time I opened mine. He was about my age and we had never spoken to one another, but we agreed to go downstairs together.

Two weeks later, I heard a woman’s screams from his apartment. More than an argument; actual terror like I’d never heard in real life before. Monitoring the hall through my peephole, I saw his door swing open and a naked woman charge out, clutching a t-shirt against her chest. From my window overlooking the parking lot, I saw a van pull in as she rushed down the stairs, the back door sliding open, and the naked woman jumping in. They were back on Route 1 before the door closed. Through the peephole I watched my neighbor step into the hallway, look around stunned for a minute, and then return to his apartment. I never saw the woman again. Wishing it was something besides what it obviously was, I did not call the police. I concocted a dozen rationalizations. It’s one thing to read about things like this, and another to be within a few feet as it unfolded. LauraBeth would ask why I’d never noticed any fighting across the hall before, and why I didn’t do anything at all to help, but I had no answers. The day of the tornado, I had no idea my neighbor was the kind of man who would abuse a woman so badly she’d stage a daring breakout in the night, but you never know that, do you? The real problem is any kind of man could be that kind. There’s no reconciling the two experiences—the tornado and the woman’s escape—but I can’t disentangle them in my memory. One night the sirens, and another night the screaming, different kinds of warnings for different kinds of damage. It’s easy to become inured to anything if you live close enough to it for long enough. I was twenty-four and so wrapped up in my own anxieties I rarely took the time to notice anyone else.

The basement doubled as a small laundry room. Four other people were wedged in there by the time we arrived, and I found a seat on top of a dryer. One woman cradled her cat like a baby, while her partner played Sonic the Hedgehog on his Game Gear with the volume turned all the way up. I set my radio up in the center of the room, and we learned a powerful tornado—later classified as an F2, with winds ranging from 113-157 miles per hour—had in fact jumped the river and was rampaging toward us.

What I remember most is the hail, the machine gun bombardment of ice balls on the roof. One guy ran outside in the hail to check on his car, and I felt like I was living in the scene of a movie just before the most tragic moment, but he came back inside a minute later, unhurt. He announced, “Fucking hail is huge, man,” and he shook his head like we should have warned him. On the radio, a reporter said the Wal-Mart had been hit. “There is no looting yet,” he added. “I repeat: nobody is looting.” Like he was rooting for it to happen.

I texted LauraBeth to tell her I loved her, and then I turned off my phone to preserve the battery. The power in the building flickered off a few times, but when we got the all clear on the radio thirty minutes later, everything was working fine. My car was somehow not damaged by the hail. I hadn’t died or even come close to it. The tornado devastated parts of the city, and in the next days, everyone wandered around the city, gawking at the damage: dumpsters dropped in the middle of the road, cars bobbing in the river, a sorority building stripped of its façade like a dollhouse. One of the professors in the MFA program scolded us for treating the wreckage as spectacle. But it was spectacle. There’s nothing more human than emerging from your shelter to look in awe at the damage the planet can do to you.

Did I feel vindicated for having spent two years afraid? I did not. I just felt more afraid than before. The fear hadn’t done anything to help me. Five days later, I bought an engagement ring at the Coralville Mall. I wasn’t planning on it then. The decision had nothing to do with the tornado, or facing my mortality. While eating breakfast one morning I realized: Of course I’m going to marry her. Why shouldn’t we do it now? There wasn’t a moment of doubt. As soon as the thought presented itself to me, I understood what I wanted the rest of my life to be.

In the immediate aftermath of the tornado, I turned my phone back on to let LauraBeth know I was alive, and I saw that I’d received a dozen texts from classmates. Within an hour, I drifted over to a friend’s house, where there was no power, but there was a great back yard and a strangely beautiful evening sky. Every few minutes, someone else showed up carrying a random assortment of beer and perishable goods. Because so many people had lost power, they wanted to clear out their fridges, and then we were having a feast. Every familiar face was another friend who was safe and another reason to celebrate. Some had sustained real damage to their homes, and at least one guy lost his car—literally, it was on a different block from where he’d parked it. At two in the morning, we were still shoving more and more food inside us, opening one last beer and then one more last beer. We swelled with the urgency of people living their last night on earth. On one side of the tornado had been grad school and on the other side was the rest of my life, as if it had picked us all up in a single swipe and plopped us all down into some better place. Within a month, I would be gone and I would never speak to most of these people again. For one night, we were all still there. We told the stories of our sheltering experience over and over. I was upstairs and then I was downstairs. It was quiet and then it was so loud. Afterward, I was fine. It all felt impossible.