WOLPERTINGER, OR, ANOTHER NAME FOR RAGE by Kristen Rouisse 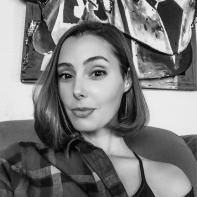 Kristen Rouisse lives in Florida. She received her MFA in poetry at the University of South Florida, where she’s currently a Visiting Instructor. Her work as appeared in RHINO Poetry, Glass Poetry Press, Hobart, Lunch Ticket, and elsewhere.

WOLPERTINGER, OR, ANOTHER NAME FOR RAGE

Rage comes in many forms; this time, I find it while standing barefoot before a picture window in a city I’ve only just met. Outside, the wind is warm and everything is made of sound. In here, it’s all central AC and the absence of mouth-breathing. Neon lights from the restaurant below paint the opposing building’s brick facade in brilliant blues and purples. Headlights flash their temporary stars. It’s very oceanic.

This is a soft rage, a longing in the pit of my stomach that stretches to the bottoms of my feet. A new strain of sickness born from how his shoulders looked in that yellow t-shirt.

Soft rage isn’t a new sensation; I’ve battled its bowl-cut, blue-eyed demons ever since I was a girl. Back then, the summer preheated possibilities that never came to be. I made myself invisible. Pretended not to hear every thread of gossip that left their lips. I wore a hypothetical promise ring on a chain about my neck. Bit into its soft metal every time I felt it rising.

We’d spend nights huddled around the community pool, high off of chlorine fumes and unwarranted freedom. We drug our heels against the marcite and called it a pedicure, took alternating swigs from a tallboy of Surge, laughed too loud for three girls so small. We gave ourselves away every time, but wasn’t that the point?

It feels selfish to define the happiest moments of one’s life, especially if they hark back to the clouded memories of childhood. But I don’t think there’s anything wrong in remembering the beauty that once existed, the cacophony of danger we cloaked our bodies in at every opportunity. Because everything turned out alright. Everyone was safe. No one was taken advantage of beneath the stairwell or lured into a distant, open door.

I’m a rule-follower by nature, which is a difficult habit to break. I don’t do it often, because it has become such a part of who I am that doing so would make me look inward in ways I don’t have the strength for. I wasn’t like that back then. I was selfish and defiant. I wanted to be ogled from between the rusted diamonds of a chain-link fence, by strange men in passing cars whose boxy torsos dangled from open windows. I wanted it until I had it. Then I hated it.

Wolpertingers are known to have a weakness for feminine beauty. According to folklore, they’re often found in the forests of Bavaria. They’re small mammals with bodies comprised of other animal parts: fangs, wings, and antlers, among them. Legend has it, a woman must go into the forest alone and bare her breasts to the beast. Upon doing so, the Wolpertinger falls into a daze. Only then is she able to trap it.

This rage is unique because it doesn’t belong to me. I only harbor it; I keep it safe from passing storms. I found it once before in a wooden corner-booth buried beneath a canopy of string lights and saw palms. We ate and whispered and watched people come and go from the dilapidated motel across the street. Inside, giant glass globes hung from rough cuts of rope. We found our sea-legs there, shared secrets, wobbled about in an undignified stupor.

The sky could crack in two and the rage would still exist. I swallow it and find myself with another throatful. I toss it into the great, gurgling Gulf of Mexico only to arrive home, sun-whipped and withdrawn, and discover it nestled on the front porch, awaiting my arrival.

Soon, night will zip itself closed. Somewhere, roosters will crow. The sun will rise in this city, and the moment will be nothing but another fleeting rush of soft rage that I felt deeply yet shared with no one in particular. A lesson in mature restraint.

How I bite at my bottom lip until the skin splits. How what’s leftover of his smell absolutely sends me.