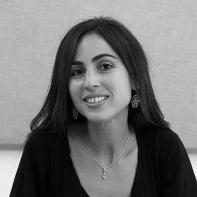 Zaina Arafat is a Palestinian-American writer and teacher. Her stories and essays have appeared in The New York Times, Granta, The Believer, Virginia Quarterly Review, The Washington Post, The Atlantic, The Christian Science Monitor, BuzzFeed, VICE, and NPR, among other publications. Her debut novel, YOU EXIST TOO MUCH, is forthcoming from Catapult, and she is also at work on a collection of essays.

This interview was conducted via e-mail by Interview Editor Devyn Carmen. Of the process he says, “You Exist Too Much probes for answers in some of humanity’s most complex experiences—trauma, codependency, and inaccessible culture. This book allows a glimpse into the mind of a woman who lives her life on the border, unable to fit in anywhere.” Interviewing Zaina was a pleasure, especially during the exciting publication process of her very first novel. In this interview, Zaina Arafat discusses how she has been handling the anomaly of a pandemic during her publication, being alienated from one’s culture, and writing workshops that felt like tennis.

Superstition Review: Your debut novel You Exist Too Much is evocative, multicultural, and holds a wide variety of deep, developed characters. The book feels like a modern Odyssey of a bisexual, multicultural woman, filled with interesting bonds and correspondences. Can you describe your process when it came to creating such a unique cast of characters and relationships?

Zaina Arafat: When creating the cast of characters, I was thinking of how they could either reflect aspects of the narrator, or elucidate and reveal tensions within her, including her insecurities, self-loathing and internalized homophobia, along with her intense need to be loved and tendency to sabotage herself in achieving that goal.

SR: You graduated with an MFA in Nonfiction Writing from the University of Iowa, the top ranked program. How has your experience in that literary community influenced your writing?

ZA: Being part of the literary community at Iowa tremendously influenced my writing, as it empowered me to take greater risks with subject matter and with form. Being in workshops there was like playing tennis with people who challenged my game, and helped me improve it dramatically. I'm still close with my classmates, and they've been a huge source of support for me.

SR: What was the publication process like for you as a first-time author?

ZA: So far, the lead up to the book has been both exhilarating and anxiety-producing, which I think is normal. What isn't so normal is having a pandemic occur three months before the publication date, along with the isolation of quarantine during an already stressful moment! But I'm using this time to connect with other writers and to engage virtually with the literary community, and to work on new writing. I've also had incredible support from Catapult, my publisher, throughout the pre-publication process, and I'm so grateful for that.

SR: While reading your book, I noticed that there was an abundance of flashbacks. Can you describe your process of organizing the plot of this story?

ZA: When organizing the plot, I allowed my mind to wander from the present scenes and form associations with past memories. I wanted the flashbacks to be seamlessly woven in, to occur whenever an incident or interaction in the present triggered a memory. My goal was to shed light on the ways that our pasts can affect our present selves and our behavior.

SR: I found it very interesting how the narrator is so co-dependent throughout most of the novel, yet in her stay at a psychiatric facility, she seems self-absorbed in her own experience. How did you negotiate the personality and depth in this character?

ZA: There is a quote early in the novel from Proust: "The real voyage of discovery consists not in seeking new landscapes, but in having new eyes." I wanted her time in the center to be precisely about that: turning inward, and really getting to the source of her trauma and subsequent actions. It was a challenge for her to be without a relationship or an obsession, things that would allow her to distract away from herself, and that was part of the point.

SR: There were many situations where the protagonist felt detached from her ancestral heritage. Can you elaborate on that cultural alienation?

ZA: This, to me, is one of the painful features of being a Palestinian in the diaspora, as well as a child of immigrants and a first-generation American, of feeling one's culture and heritage off in the distance but not having access to it. I've often felt it would be better to belong to one culture or the other, as being in between two cultures can leave you feeling like you belong to neither.

SR: On page 88, the narrator notes that, “Arab women have been mutilated by knives, shrapnel, acid, bombs, and I was shaken because my mother told me I was average?” I was intrigued by this reflection upon the ways human experience is shaped by our cultural upbringing. Could you explain what you had in mind when writing these character traits?

ZA: I was thinking about collective cultural trauma and how we relate to it, how much it affects us, what we inherit from it. I was also contemplating what we owe to those within our lineages who came before us, to those who exist alongside of us yet face far different realities. How do we live with that knowledge, what do we do with it.

SR: While staying at The Ledge, the narrator is confronted with people who have similar issues that she has, and their backgrounds start to blend together. Can you elaborate on this feeling of commonality the narrator is experiencing?

ZA: Yes, initially she's put off by that commonality, and seeing herself reflected in others, people whom she distinguishes herself and dissociates from at first, but eventually she finds comfort in it. That commonality is meant to undermine any sense of uniqueness, and singularity, which takes her down a notch and humbles her, and also alleviates pain.

SR: You Exist Too Much was an enjoyable and revealing experience I would highly recommend to any reader. Are you looking to publish any future projects?

ZA: Yes, I'm working on a collection of essays about the diasporic Arab experience and post-colonial dynamics—socially, culturally and politically—between former subjects and former colonizers.

ZA: I wrote a lot of the book at my desk in my apartment in Iowa, with a note card taped to the wall in front of me that listed the main ideas that I wanted to communicate in the book, along with the book's epigraph: "Pleasure disappoints, possibility never." I also wrote part of this book at a co-writing space in Manhattan called Paragraph. Having other writers around that I didn't necessarily even have to speak to was essential to my process. I didn't have a dedicated desk there, but I would try and arrive early enough to get a desk by the window. Whatever desk I'm writing at, in Iowa or New York or elsewhere, I try and keep its surface completely clear so that my mind isn't distracted, and I can really focus on conjuring up the story.