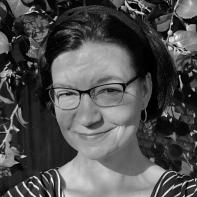 Kelle Schillaci Clarke is a Seattle-based fiction and creative nonfiction writer, adjunct English instructor, and former arts journalist with deep Los Angeles roots. Her recent work has appeared or is forthcoming in Blood Orange Review, Barren Magazine, The Citron Review, Pidgeonholes, and Ghost Parachute, which nominated her flash fiction, “Polite,” for a Pushcart prize in 2019. She earned her MFA in Creative Writing from the University of Nevada at Las Vegas, but left the desert in favor of the rainy Pacific Northwest, where she can now be found tweeting @kelle224.

Chickens have two wings with which they can fly only short distances. Wing clipping, the most common method of controlling the flight of backyard chickens, involves using sharp shears to cut off the first ten flight feathers of one wing. — from A Guide to Raising Chickens

You are standing at the top of Suicide Hill, surrounded by a bunch of boys on bikes and skateboards. You are on old-school skates—white boots, four beige wheels—which, like your knees and calves, are scarred with dirt and streaks of dried blood. You wish you were skateboard-cool but your body is too big and awkward and you can’t get the balance—or the cool—just right. You tighten and double loop the laces, look to Teddy standing at the bottom of the hill.

You are ready when he signals the okay, no cars coming from the cul-de-sacs; you bend your legs, establish balance, and launch yourself forward, taking curves with caution, then letting loose at the straight away, leaping the curb, landing the jump, speeding victoriously into the street.

“Car!” Teddy screams, and your arms flail and spin as you panic, turn quickly, wipe out. The boys laugh and laugh. The boys will make fun of how you looked coming down the hill, the contorts of your face and curves of your already unwieldy body. But you will ignore them and savor how it felt, for that brief moment, to fly.

The fleshy growth under the turkey's throat is called a "wattle." These pieces fill up with blood and turn bright red when a tom wants to attract a hen but they can also turn blue if the turkey is scared. — from CBS News

She challenges you during recess to a fight at 3pm, as if fourth grade in Orange County was the Wild West. She is gangly, freckled, mean. Everyone shows up, playing their part in the dystopian playground scene; this childish war of words.

That night, your thighs are rippled, dimply chicken skin; the flesh so thick at your neck, you imagine ripping into it, using dirty fingernails to tear it to shreds.

The small fleshy red area atop the chicken’s head; it can be prone to frostbite and can be lathered with petroleum jelly to protect it from the elements. Both male and female chickens have combs, but they’re larger in males. — from Raising Chickens for Dummies, 2nd Ed.

You are not a sorority girl. But you live with them and do tequila shots with them in the living room of your shared off-campus apartment, where your grainy black-and-white Smiths poster competes for wall space with Anne Geddes’ creepy baby heads sprouting from peapods and flower pots. They drag you to their parties where you behave badly, resulting, one night, with you unintentionally locking a friend in a community center bathroom. You are standing in the dark parking lot waiting for the emergency locksmith when the Frat-bro with the shiny, slicked back hair approaches you.

“You shouldn’t smoke,” says slick Frat-bro, who has messed around with your friends, but never fucked them, which you think is because he doesn’t actually like to fuck girls, just mess cruelly with their heads. “It’s a disgusting habit.”

“You are a disgusting habit,” you tell him, putting out the cigarette with the heel of a green Doc Marten you bought last summer in Amsterdam, then quickly lighting another as the lock smith pulls into the lot.

A pouch in the chicken’s esophagus used to store food temporarily before moving it on to the stomach. — from The Poultry Digestive System

You are in bed with your first serious, post-college boyfriend when the pain hits; a stainless steel ball of electric shock lodged deep in your sternum, radiating torture through ribs, doubling you over as he helps you down the steep wooden stairs of the loft, holds back your hair as you desperately try to expel it, puke it up, but it won’t move.

You are going to die.

“I’m taking you to the hospital,” says your boyfriend, an artist your parents hate for being so much older than you. But the move had been your idea, and now there you are, sharing a high desert emergency room with gunshot bleeders, missing fingers, and heart attacks.

You are sent home with medicinal green sludge and no diagnosis. But you’ll be back in a month, after nearly passing out during lunch service at the white napkin restaurant where you serve downtown lawyers and politicians. Your manager will excuse you from side work while an alarmed co-worker sneaks out to call 9-1-1.

Once your gall bladder is removed, you will experience a morphine rush of pain relief that will feel like the soft blossoming of exquisite blue flowers. You will want to call everyone you have ever loved, just to talk. The pain drugs will wear off. Your parents won’t visit you in the hospital. The boyfriend will move back home. Twenty-four will rip your fucking insides out.

A gizzard is an organ found in the digestive tract of a chicken. Because of the strong grinding motion of the gizzard's muscles, such sharp objects can put holes in the gizzard wall. — from The Avian Digestive System

There are days you will miss your gall bladder.

First, you eliminate the foods that hurt the most to eat: meat, fried foods, spicy foods, dairy, avocados, anything in sauce, anything acidic, anything with pesto, olive oil, nut butter, any butter, bread, gluten, sugar. “You eat like a bird,” friends will comment; but is it their business? Your body appears happier with these decisions, if a bit weaker, and you are happier with your new body. So much so, it borders on dysfunction.

You learn to eat soft foods, which come up easier. You color code to ensure everything that went in finds its way back out. You will, in your quiet desperation, scrape nails into the soft, delicate areas in the back of your throat and leave tell-tale teeth marks on your index finger.

You can differentiate between cocks and hens by their tails; the tails of cocks curve down when they reach adult size. — from Body Parts of a Chicken

A mediocre punk band screams obscenities while you toss back shots with your married, almost middle-aged boss. You’re the junior reporter covering the event—Feminist Punk Rock Bowling and Bingo—but he shows up to keep you company. He hired you less for your knowledge of fairs and festivals than he did for your sarcasm and rage, both of which fuel your weekly calendar picks — the stuff nobody reads. Someone yells Bingo! and your boss grabs your hand, rushing you out through pouring New Mexico rain.

“The Clash sucks,” he says, chucking the CD from your dash to the floor, tuning the FM dial to KUNM. You chain smoke Parliaments through the driver’s side window to stay awake and alert; you have the Pork ‘n Brew food truck festival to cover early the next morning.

“Let’s play pool,” he says, taking your hand again and leading you upstairs to an empty part of the bar overlooking Central Ave, barren at this hour. You rack the balls, he grabs and kisses you, you savor the feel of hands on your hip bones, and that’s as far as it goes. You end it there quickly and laugh it off later, when you discover he does that to all the girls.

When you first start dating, you decide to cook for him, partly just to prove you can. You learn to cook meat for the first time in your life. You pound out the thick pale slabs of chicken breast; cage-free, organic, once-happy chicken. You use your sharpest knives to carefully trim every last sinewy white thread from the flesh, then run the blades under steaming hot water for several minutes, searing fingertips.

You slice the plastic wrapping off styrofoam containers of raw meat and look away as red juices drain into the sink. You call your mom to ask her if it’s okay that some of the roast has brown patches on it. You take close-up pictures of it with your phone and send them to her. You double the vegetables in the recipe. You use two pairs of giant tongs to awkwardly lift and deliver the hunk of meat into the slow cooker, grateful you won’t have to deal with it for the next 6-8 hours.

Despite your daily walks, you both pack on “happy pounds,” which bear no noticeable impact on the fit of your wedding gown or the grin in your honeymoon shots.

You ask your husband to run out for Ben and Jerry’s Banana Peanut Butter frozen yogurt, upon which you sprinkle bacon from this morning’s breakfast. You are a salt fiend, but your daughter will be born soon with a sweet tooth. You watch her grow beneath your skin, watching from the outside as the soles of her feet slide across your insides when she wakes you at 4am with soccer kicks and heartburn. She is already active, already strong. You lick the bacon salt from your lips and rub your huge, unwieldy belly.

‹ nonfiction up WOLPERTINGER, OR, ANOTHER NAME FOR RAGE by Kristen Rouisse ›