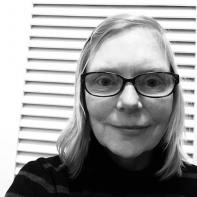 Carol Guess is the author of twenty books of poetry and prose, including Darling Endangered, Doll Studies: Forensics, and Tinderbox Lawn. A frequent collaborator, she writes across genres and illuminates historically marginalized material. In 2014 she was awarded the Philolexian Award for Distinguished Literary Achievement by Columbia University. She teaches at Western Washington University and lives in Seattle.

Non-Mom gathers her little nons in a basket and names them one by one: Milquetoast, Backbone, Featherweight, Shoestring, Janet. You only have to be as much as you think you aren’t, she whispers. They shiver and huddle. Beads of regret glisten on their foreheads. Non-Mom whistles as she carries the basket past the empty fish market, past the brownfield patch of park, past the last pier where gulls circle and dive through smog. The nons look up at the sky’s wild nothing, stunned.

Featherweight starts it: meow and hiss. The nons think they’re kittens, scratching the basket, clawing for teats. Non-Mom listens for the language she knows, but they’re otherworldly ghosts, alphabeting furry things. What’s the Plan B now that nons crowd the house? Blurry and burping, they spill onto sidewalks, nest in the mailbox, red flag shouting Stop! Non-Mom spends all her time trying to collect them, but she likes to neglect them—it makes her feel young.

She thinks she would like a condom for each little non. She’d like a pill, a shot, but they’re already here, and so judgmental! Our house is so small, Shoestring says. What happened to learning Spanish? Backbone teases. You’re getting fat, Janet tells her, pointing to her non-baby bump. Non-Mom pinches her stomach with pincer fingers, holds her muffin top over her Non-Mom jeans, and tries not to breathe. She sucks in and tucks them all into her Spanx—her little nons stowed in the squozen space between her body and the world. This is how she promises: I’ll carry you with me always.

Soundtrack rattles my windows, knife-tremor, gun-tremor, mask pressed to pane. It isn’t rain; more like complaints thudding I should I should I should. Work all this weather in, like stage directions. I’m not my own even at home, because home is a story about me—begging, middling, unending. Raw footage unspools over asbestos ceiling tiles. I’m in a movie and I’m upside-down. This movie’s moving: footsteps and hisses build a staircase, bone-key whittles lock to click. The diegetic bits I expected: oh podcast, oh phone call from Mom. But intruders in pale coats, cat-intruders, dog-intruders, marauders, missionaries, Man from Mars? My stunt double climbs in through the window and tosses her ladder down after. Quit pro quo—is this my cue to jump? I just wanted to eat alone. I wanted to sleep on both sides of the bed at once. I wanted to stay up and up and up and sleep on the balcony, traffic spooling in every direction, tents and syringes on the sidewalks, dog walkers up early, crisscrossing my late. I wanted to let the non-diegetic breeze meet my diegetic sneezing. Here, I offer the city, have this little bit of me. The city doesn’t notice. Somewhere the question shifted from how do I get out to how did I get in?

At the corner of 14th and 65th, the Google Earth cam car watches coyotes navigate broken glass and spent syringes. An unspooled umbrella scrabbles gray sky. Trees dot the median, branches hovering over tents. The world’s richest men sleep a few miles east. Cam Car exhales trails of pixels on pavement: freeways and fractured bridges, shards of tarp hunched under birch, Hands up! pinned against a shattered car. A shopping cart piled with cardboard rolls downhill. In an oversized coat over plaid pajamas, a woman steps off the curb into rush hour traffic, nonplussed by near death or racing to catch it. “Sir!” someone calls, but she’s out of body now, lashed to the Cyclops eye of Cam Car, which promptly spits her out. Surplus, supply and demand, nickel-down, disappearance pitched as corporeal interest management—survive by Googling yourself! Meanwhile the coyotes make their way east, licking pixels from the street.

The walls of this city are ghosting me, falling into a sea of subaquatic condos. I ghost right back, skulking the alleys, drawing graffiti in disappearing ink. Not names, not jeers, not cartoon faces—I make windows, and memory lives there as lichen. I liken it to home, a concept gone. Familiar faces rain from clouds of crowds, memory flirting with strangers’ features. Even danger comes candy-colored, pink and seafoam swallowing their own. Hurricanes have the prettiest nicknames. This one’s Dor; its door slam misses Florida by inches. On primetime TV, POTUS draws storm warnings in indelible ink. Throws a tantrum when he’s caught misspeaking, which happens so often I’ve forgotten Before. Now he’s golfing. Now he’s bulldozing butterflies to build a wall. Now he’s inventing the weather, rewriting maps to match his mistakes. Was this always how it was? What happens After? The ground is always gutted promptly, gentrified and rented before the next rain dredges up any bones. What plenty, the billboards rave: miles of wrapped and seeded produce. Taste of taupe. Come live unseen on the Aisle of Bleach, white on white unending.

A black hole is tearing open a star like a trash bag and spewing old light all over space. On Earth, plastic flowers and e-cigarettes clutter my dumpster each week. Each week, someone arranges discarded objects into piles: edible or non, wearable or non, His or Hers, Husband or Wife. Raccoons upended it all the next day. No matter—most of us still end up together, nonentities swirling into the soil. I live in a body, which is to say I live in a garbage carriage that drives me toward nonbeing every day.

Still, the garbage gets made. Each week, someone tugs black bags out of a metal bin. Here’s a circle, here’s a knife. No bin to put dark matter in. But here’s bags slit down the middle, plastic box tops and condoms spilling onto asphalt. Life-cum-death, sum of our droppings. Garbage isn’t private property. It collects in the corners of comedies, plastic straws and broken glass, bottle tops and moldy sponges. It sticks in the eye like last night’s glitter, swirls into massive patches in the Sargasso Sea. Or it goes to live behind a wall that lets us forget, becomes dark matter when amnesia bluffs invisibility.

Garbage is what comes after. It’s a ward of the state of decay—the last state of matter—so we use it to flatter ourselves till we get there, spewing neon junk in circles around our bodies, believing we’re better than what we leave in our wake.

‹ poetry up Five Poems by Carol Guess and Rochelle Hurt ›