"The Cigarette Machine" by Katherine Tunning 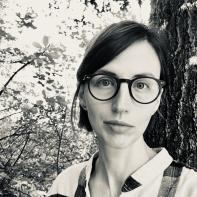 Katherine Tunning's stories and poems have appeared or are forthcoming in The Lascaux Review, Midway Journal, Plainsongs, Washington Square Review, and elsewhere. She lives with her partner (and a highly variable number of cats) in Boston, where she works as a translator.

The sign outside the garage read MAX MECHANIC, so Geoff said with false heartiness as he came through the door, bell jingling thinly: “You must be Max!”

The man behind the counter unfolded with a slow, tectonic motion, and just as slowly pointed at the patch on his left breast pocket. It said Bruce.

Geoff waited for the man to speak, then waited for himself to speak, then waited for his wife to speak, to burst in with her hummingbird flurry of words, but she had moved out three months ago, and the fifteen minutes in the driveway when he picked Tessa up the day before was the most time they’d spent in each other’s presence since. At his side Tessa began to emit a familiar droning whine and Geoff shifted his grip from her wrist to her hand, to make it look like they were both in this voluntarily. Tessa took the opportunity to wrench herself free.

“Stay next to me,” Geoff commanded, the blinking of her light-up sneakers just visible in his peripheral vision as she trotted away. Then he turned back to Bruce, who was waiting with blank geological patience. “My left taillight’s out. I got pulled over earlier, just got a warning. But we’ve got the second half of the drive tomorrow, so I ought to get it dealt with.”

“I mean. If you can, if you have the part, the wire, the bulb, whatever. You know.” Geoff’s hands rose with a desperate fluttering motion, patting down the air. He tried to weigh them down.

“Take a look,” the mechanic said, his voice bubbling up out of him like slow mud, “But no promises.”

A rattling from the far corner of the garage reminded him suddenly of his daughter’s existence. He spun around. “Don’t touch that!” he shouted, before his brain could even register what the that was.

It was an ancient cigarette machine tucked away in the shadows, the bright aquamarine housing draped in dust.

“Don’t you dare touch that,” Geoff said, with more conviction. Tessa’s hands floated a few inches away from it, trembling. She began to keen. “She likes buttons and things,” he explained to the mechanic.

“Still.” Geoff waited for his wife to say that it had germs, which was her answer to everything. “It has germs,” he said after a while, feeling stupid, though there was no reason to feel stupid. It absolutely had germs.

Tessa turned back to the machine and began jabbing one button after another. Geoff’s pulse roared in his ears.

Tessa picked a knob and yanked. There was a creak and a clattering, strangely loud, and then the delighted hiccupping honk of her laughter. She ran over, hands clasped tight. “Look!”

Geoff closed his eyes and inhaled slowly, counting the beats.

Geoff opened his eyes: teeth. A dozen at least, molars and canines and incisors, a tiny mountain of gray and white and yellow rubble rising from Tessa’s smooth pink hands.

“What the hell,” breathed Geoff. “I thought you said it was broken.”

Geoff pointed at the trash can by the door: “Throw those out right now, Tess. You don’t know where they’ve been.”

Geoff and Tessa and Bruce the mechanic looked down as one at the teeth: the coffee stains, the dark spidering lines, the glint of a filling in the cup of one molar. Tessa closed her hand over them and glared at her father, mouth in a knot.

The mechanic pushed a form across the counter. “Fill this out. Probably got the bulb. Check back tomorrow, ten or so.”

That night at the motel Geoff tried to throw the teeth away, but the howl Tessa let out went on for a full minute, by the end of which Geoff was kneeling on the rank carpet, clawing through the trash in the little wicker wastepaper basket. After he fished the teeth out, he dumped them into a green glass ashtray he’d found in one of the dresser drawers and set it on the night table between the two beds. Tessa inhaled in short gulps and watched.

“A compromise,” Geoff said. “The teeth stay in the dish. You don’t touch them. I don’t throw them out.”

Tessa tipped her head to one side. He could see she was exhausted, hadn’t slept well in the pullout bed at his new place, had only napped a little during the long car ride. “But I can hold the dish?”

It was a reasonable counteroffer. “You can hold the dish.”

She picked it up carefully with both hands and shook. The teeth rattled and settled. Tessa watched, entranced, and Geoff watched her watching.

Around two in the morning he woke to a sputtering cough, a gasp, a throaty gurgling that jerked him upright and flung him across the gulf between the two beds. For a few seconds he felt around in the covers like she might have drowned in orange flowered polyester, then found her, finally, up on her knees and shaking. “What is it? Are you sick? Did you have a bad dream?”

Geoff flicked on the light. A thin ribbon of blood was unrolling down her chin. There was a new absence in her bottom row of teeth.

“I didn’t even know it was loose,” he murmured.

“It’s gone,” Tessa said, rocking back and forth. “Gone—gone—gone—”

Geoff pawed through the sheets, brushed down Tessa’s nightgown, finally gathered her into his arms—she went limp for a moment, like when she was a newborn, her only modes flail-and-claw or oh-god-she’s-dead—and said, “I think you must have swallowed it. That happens sometimes.”

The bundle of limbs in his lap tensed and drew inward, then flung out in all directions like a star reaching the end of its vast life, thwacking Geoff hard on the chin in the process. He squeezed reflexively, squeezed hard—if he could just pin down all those arms and legs, just shape the furious messy force into something that might be reasoned with—

The word they were both waiting for crackled in the air, but neither of them said it. They went on waiting. Eventually Tessa took a deep breath, shuddering with effort, and whispered, “I want to find my tooth.”

“I wish I could find your tooth. But I really think you swallowed it. I’m sorry, sweetheart. Are you sad because you wanted to leave it for the tooth fairy?”

Tessa frowned. She enunciated carefully, around the tissue, “I wanted to put it wiff the others. All togeffer.”

They both looked at the green ashtray.

Geoff pushed the sweaty hair back from her face. “Well. That makes sense.”

The next morning, they ate the continental breakfast—better than Geoff had expected—and Tessa showed the hole where her tooth had been to the receptionist and the woman pushing the housekeeping cart and the man replacing the empty coffee urn, and they all responded with the appropriate awe. After they were done, Geoff filled two to-go cups of coffee and then stood there looking at them like an idiot.

He was about to toss the second one when Tessa asked, “Is that for Bruce?”

“You know his name?”

“He had a label,” Tessa said, patting her chest.

“Right. Yeah. I thought we’d bring Bruce a coffee, since he’s fixing our car so quick. Or we hope he is.”

“And he’ll like to see where my tooth was.”

“Sure,” Geoff said, “Who wouldn’t?” At the corner he tossed his empty cup in the trash and reached for Tessa’s hand, and she let him take it.

But when they reached the auto shop the fragile truce began to crumble. Tessa heaved the door open, the bell on the handle frantic in the musty quiet. She sped toward the cigarette machine: “More teeth! I want more teeth!”

“Goddammit”—Geoff stopped, tried to make his voice stern but not angry—“Tess, stop right there. I mean it!”

But it was Bruce’s gravelly voice that actually stopped her: “Oh, no, doll. Won’t be teeth again. Never the same thing twice.”

Slowly Tessa turned around. “What will it be?”

“One way to find out,” Bruce said with a wink. Tessa, suddenly bashful, came over to Geoff and pressed her hot, dense weight against his side, hooking her fingers in one of his belt loops.

Geoff handed the coffee to the mechanic, who accepted with a nod.

“Once it was popcorn. Hot, like it was just popped. Another time a whole bunch of dirt pouring out, good rich soil. Ice cubes. Jellybeans. Pictures in strips, like one of them booths. No one I knew. Razor blades, one time, real rusty ones—”

Bruce shrugged. “Once it was quarters. Few hundred bucks, in the end. I sat there and wrapped ‘em all one night while I watched the game. Got a bottle of Jack, the good stuff. Gave the rest to my kid when he was home for the weekend. Always needs money, always needs quarters, for the laundry. Away at college. At least he does his laundry. He’ll be all right. Engineering,” he went on, in his rumbling monotone. He moved his hand in a slow arc that encompassed the entire garage. “Like this, but—you know—more.” Then he stopped, slurped the coffee. “Had the bulb. All set. Just sign here.”

Geoff bent his head and signed. A little dazed by the mechanic’s sudden monologue, he failed to notice the moment when Tessa let go of his belt loop and crept silently away. Then a sharp sound spun him around and he saw her: palms slapped flat against the filthy glass of the cigarette machine, nose an inch away, brow furrowed.

Tessa thinking, Tessa choosing, Tessa pulling a knob with a clunk, a decisive nod of her rumpled dark head.

Could be blades, Geoff thought. Could be wasps, bullets, napalm, poison gushing out. Could be anything.

Beside him Bruce observed with quiet interest.

For a moment nothing happened.

Then from the little tray at the bottom emerged a butterfly, mint-green and ghostly. It balanced on the edge, tried its wings, and rose. A second came, then a third and a fourth, then Geoff lost count—buttery yellow, powder blue, flame orange, teal, violet, green. Iridescent and plain and spotted and whorled, the size of a thumbnail, the size of a saucer. The air beat with color, a baffled shifting cloud inside which Tessa spun, gasping with laughter, arms stretched wide.

A monarch lit on Bruce’s seamed hand. It stayed there, folding and unfolding, feeling the air, as he peeled a carbon copy from the form and pushed it toward Geoff.

“Wow,” the mechanic said mildly. “Best one yet.”