A Poem by Liz Marlow 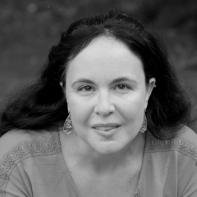 Liz Marlow's debut chapbook, They Become Stars, was the winner of the 2019 Slapering Hol Press Chapbook Competition. Additionally, her work has appeared or is forthcoming in The Bitter Oleander, The Greensboro Review, Nimrod International Journal, Valparaiso Poetry Review, and elsewhere.

Icarus’s father, Daedalus, constructed wings out of peacock feathers and melted yahrzeit candles from all their ancestors. He was tired of the dead weighing him down—their memory in his name. He said to Icarus, With these wings, we can fly over the labyrinth that traps us. But when Icarus first tried on the wings, adjusting them on his shoulders, their weight left an impression in his skin like a string tied tight around a turtle’s shell. He stood still for quite some time, staring over the edge of the cliff at the labyrinth’s perimeter, waiting on wind to lift him. And then it happened—his father’s push or a gust took him (he didn’t care which). For once, nothing was in his way, nothing seemed like it could drag him down. The sun’s warmth calmed him like his mother’s breath, but too much of anything can be a bad thing. And just like that, as all his ancestors called his name through the heat, he knew he would never really leave the labyrinth. Wings a myth, but those yahrzeit candles real, and he realized in that moment, the only possibility of freedom was jumping off the cliff.