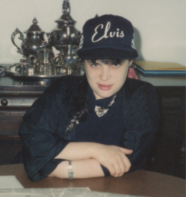 Elizabeth McCracken is the author of seven books: Here’s Your Hat What’s Your Hurry, The Giant’s House, Niagara Falls All Over Again, An Exact Replica of a Figment of My Imagination, Thunderstruck & Other Stories, Bowlaway, and the forthcoming collection of short stories The Souvenir Museum.  She’s received grants and fellowships from the Guggenheim Foundation, and the National Endowment for the Arts. Thunderstruck & Other Stories won the 2015 Story Prize. Her work has been published in The Best American Short Stories, The Pushcart Prize, The O. Henry Prize, The New York Times Magazine, and many other places.

“Throwing Readers into Their Lives,” an Interview with Elizabeth McCracken

This interview was conducted via e-mail by Interview Editor Anna Narin. Of the process, she said, “It was a pleasure to interview Elizabeth McCracken about The Souvenir Museum. Because the stories were all connected, it was a treat to read about Jack and Sadie in different time perspectives.” In this interview, Elizabeth McCracken talks about how she organized the connected stories, the process she uses to create her characters, and how her obsessions influence her writing.

Superstition Review: Your Twitter account is a hilarious artifact that spans a wide range of topics and interactions. Could you discuss how you use Twitter, both as a writer and as a human? What are the benefits of communicating that way?

Elizabeth McCracken: I mostly use Twitter as a human, not a writer; I think my favorite people on Twitter do likewise. I like Twitter as a place for wisecracks and complaints, to tell everyone that I went swimming that morning and they should be impressed with me. Occasionally, I post some piece of self-promotion. I also use it as a place to get book recommendations. It’s really good at that.

SR: I saw that The Souvenir Museum was longlisted for the National Book Award. Congratulations! Could you describe the publishing journey with this particular book?

EM: The oldest story in the book—“Birdsong from the Radio”—is pretty old. I’d written it when I was putting together my last collection, Thunderstruck, and it was close in feel to another story, so I kept it back. Then I bumbled around and wrote a few stories until I had half a book and took it to my editor. Then I forgot. And then suddenly I had a deadline and I needed to pull it together and I wrote five stories in a state of panic and improvisation.

SR: “Birdsong from the Radio” is my favorite story in this collection. It is both haunting and heart-rending. We know Lenora begins to succumb to her madness after the tragic death of her children, but what was the idea behind your decision to end it with Lenora telling Mike Wooster “it will be a pleasure to watch you eat”?

EM: As I said: it’s an old story, so I’m trying to remember—but my memory was that I didn’t know until I wrote that line. I had looked at challah in a bakery case and had the idea of writing about them as children; and the story was commissioned by Kate Bernheimer for a book of tributes to myths, and I had chosen Lamia, a child-eating monster. The line itself, though, surprised me.

SR: Family and personal relationships are running themes throughout your book. I appreciate the complexities and complications that seem to follow even the most mundane relationships. Having the stories all revolve around the main characters gives the book a feeling of nostalgia as it dives into their pasts before they met each other. How did these themes present themselves to you as you composed this collection?

EM: I’ll be honest: I never think of themes while I write. My own obsessions—puppets, badly behaved dogs, boats, etc.—work their way in.

SR: When you’re writing a draining (or sexy, or sad, etc) scene, like the interaction between the woman and Dr. Benjamin in “It’s Not You,” how do you prepare yourself for the emotional work of writing?

SR: I don’t believe I’ve ever read a collection where the stories exist as a continuum. It was a treat to see the other stories of Jack and Sadie scattered throughout the book. What was your process for organizing the stories in this collection?

EM: I love connected stories—one of my favorite collections is Sweet Talk, by Stephanie Vaughn, which came out when I was in graduate school 30 years ago. It has a series of connected stories amid unconnected stories. I remember how exciting it was to read them. The connected stories in this collection are the ones I wrote first drafts of very quickly. I wrote them in one order—Jack and Sadie meeting first, and their last story chronologically last—but it made sense to scramble them in the final book. I liked the feeling of throwing readers into their lives, then backing up to explain them.

SR: How did The Souvenir Museum become the title story for the book?

EM: As with all my collections of stories, the title came first. I went to the actual Souvenir Museum in Denmark, and I thought, “This would make a great title for a book.” So then I had to write the story.

SR: In your interview with Joan Silverman, she asks what is it about strangeness that keeps you going back to your stories. You said that you have no interest in ordinary people, and I see now how true that is. The characters in your stories are undeniably strange and also unforgettable. Could you describe your process of creating these characters?

EM: Do you know: I couldn’t tell you. I do so little on purpose when I write! The main thing: I know what their bodies are like. That’s the most important thing for me: their souls follow.

SR: Your writing contains such evocative details of setting. Something that stuck with me was when you described the Narcissus Hotel, how it sits “on the edge of a lake and admired its own reflection.” How much ‘world building’ takes place before you start writing?

EM: None. In first drafts, I am always flying by the seat of my pants. I do a kind of visualization so I can see rooms, buildings, etc., but it’s not meticulous.

EM: Messy. Shocking. Wherever it is—I’m quite flexible, and work in many places, and make a mess wherever I go. But I dream of a room of my own.