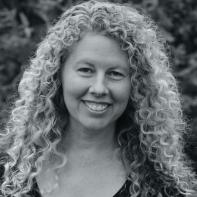 Erin Murphy’s work has appeared in The Best of Brevity, Guesthouse, Waxwing, The Georgia Review, North American Review, Memoir, The Normal School, and elsewhere. She is the author or editor of ten books, including Creating Nonfiction: Twenty Essays and Interviews with the Writers (SUNY Press, 2016), winner of the anthology Gold Medal Foreword INDIES Book of the Year Award. She is Professor of English and Creative Writing at Penn State Altoona.

What do you think of first? The beads your boarding school classmates snatched from your throat to rub against their teeth? A test: were they real pearls or a $5 strand from Gordmans? Were you a real student or the daughter of a single mother on scholarship?

Or perhaps you think of purl, the inverted knitting stitch. From the Middle English: pirl, to twist. Like the time your mother was knitting a scarf to bring you for Parents’ Weekend until her needles were confiscated by airport security. Cigarettes had just been banned on planes, so your single, smoking mother had nothing to do with her hands on the four-hour flight.

[This is a lie. Well, not the part about the knitting needles—it’s true they were taken, though you don’t remember where your mother was flying or what she was knitting. But she never came for Parents’ Weekend. It was too far, too expensive. Your roommate’s parents took you to Lowery’s, the local seafood place where fried clams and shrimp came in red plastic baskets. Years later, you saw a photo of Lowery’s in a book about Jim Crow. The sign said We Serve Whites Only.]

Maybe you think of Minnie Pearl, the comedian on Hee Haw with a permanent price tag dangling from her hat. You could have bought a new taffeta dress for the spring formal, tucked the tag inside the sleeve and returned it the next day. Instead, you wore a lace dress discarded from the school theatre costume closet. You dyed it with RIT powder in the laundry room sink, pink swirling like blood in the dorm toilet those times you crammed tissue in your panties and waddled down the hall to borrow a tampon.

[Do you distrust me now that you know I lied? Or do you trust me more because I admitted it?]

Or Pearl, daughter of Hester, the original single mother. You read The Scarlet Letter in Mrs. Perkins’ 10th grade English class. Later that year, without telling you, she submitted a short story you wrote to a writing contest sponsored by the local community college. She surprised you with a first place certificate and $100 check, which she cashed for you because you didn’t have a bank account.

You might picture the abalone ashtray your mother kept even after she stopped smoking. Home on summer break, you’d run your finger along its iridescent belly.

[Iridescent: a word you tell your students not to use. Show me iridescence, you say.]

Or maybe you think of an oyster at the bottom of the Chesapeake Bay. When an intruder—a parasite or piece of sand—penetrates the lips of its shell, the oyster coats it with a secretion—nacre—until it hardens like bone. Sometimes a shimmering sheath, sometimes a pearl. Something from nothing.