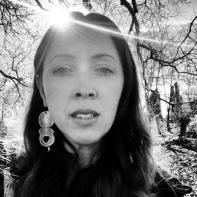 Kelly Gray (she/her/hers) is a writer, playwright, naturalist and educator residing on occupied Coast Miwok land amongst the tallest and quietest trees in the world, exactly nine miles and seven fence posts away from the ocean. Her writing appears or is forthcoming in Passages North, Pithead Chapel, Hobart, Inflectionsist Review, Under a Warm Green Linden, The Normal School, Barren Magazine and elsewhere. Her book of poetry, Instructions for an Animal Body (Moon Tide Press, 2021) and her audio micro-chap My Fingers are Whales and others stories of Cetology (Moonchild Press, 2021) are available at writekgray.com.

Last night, my daughter and her friend were standing in our yard as the sun went down. They were looking out past the recently cut back blackberry bush, which gave them a full view into the forest. We live in a canyon with creeks in every direction except west, which is above us and dense redwood forest. From this direction, coming down the hill, was a wild animal. They ran inside, voices and arms swinging at full tilt, sharing they had seen a bobcat. Pointy ears, tail, jumping. Carefully, cautiously navigating their excitement, I asked my mothering questions, leading them to deduce that it had been a fox. Grey fur, out in the open, the sharp features.

This season, our native Gray Foxes have been everywhere. Everyone in the neighborhood has seen or heard a fox, that indescribable call that is part hysterics and part open-mouth-sky-swallowing-scream-howl. Their scat lines the trails, found on fallen logs and rocks, they seem to mark everything while they poop. This seems like a joyous expression of self-relief, to be able to release oneself on every outlook. I imagine them with a sense of humor about it, claiming all the spots we might sit, anything that protrudes. As climate change plunges forward, perhaps off the cliff, we see strange phenomenon play out around us. Yes, the expected browning of drought sucked hills, dry lightning storms bringing apocalyptic fires, floods that sweep away cars, livelihoods, gas stations. We also see massive butterfly hatchings brought on by warmer weather, whales washing ashore, and here, in the region of redwoods, which were truly once rainforests within my lifetime, we see the too-soon emergence of baby wildlife. As temperatures increase, cavity nesting birds and mammals who create homes in burrows, dens and trees, find their homes too hot to inhabit during the day. Babies take to the sky or upper earth too soon, often to their own detriment. Newly born wildlife isn’t always quick enough to crossroads or strong enough to fly. A few weeks ago, we saw a baby fox, maybe two weeks old, just large enough to fit snugly in two hands, dead on the road. Curled up. Looking as if asleep on the cold pavement made bright by our headlights. It was July and 85 degrees out at 9pm in coastal California. It was a blind corner, so we were unable to stop to move the body out of the way. My daughter sat in silent anger (a newly found preteen specialty) the entire ride home, partially at us for not getting the creature off the road, and partially at the unknown human who had not been able to stop in time.

The girls spent the rest of the evening in the yard, listening to the new raven family and their absurdly loud attempts at learning to fly. I have yet to see bats this summer or hear frogs. The towhees recently left, but that is to be expected. We all went to sleep too late, and I was kept up all night by the summer moon, high in the sky, dipping in and out of the trees, marking my passing insomnia from one side of the sky to the other side of the sky. In the distance, I heard the air raid sirens, checked my emergency app on my phone, to see, again, a vegetation fire at the houseless encampments a few miles down the highway. I finally fell asleep, having already packed our evacuation bags a few nights prior.

I woke up to coffee made, my boyfriend already dressed, his painting supplies packed and by the door. With a hoodie and hat on, I could tell he was headed towards the ocean to paint fog, open expanse, maybe the white alder grove at the mouth of the river. As he leaned down to kiss me goodbye, I asked him to bring me something back. “Baked goods?” he asked, grinning, thinking of our favorite bakery. No, I want something dead.  Me, wiping my eyes, realizing I didn’t wash my face before going to bed. “I don’t know, sweetie, that seems unlikely up on the hills.” I smiled. You are headed out early. I think you’ll find something.

Twenty minutes later, a text. Meet me downstairs, I have something for you.

By the time we got the baby fox upstairs, onto the table on the deck, my boyfriend was rushing to get back on the road to catch the light. He had found it just as he was pulling onto the highway, recently struck and dead. Only a small pooling of blood in the mouth. The body still soft. The pointed ears, fur the color of bark blurred. He touched his fingers to my forehead and left.

The girls were still asleep, but the juvenile ravens were awake, making use of the canyon for flight tests. Warm light was finding its way down the tallest of trees, and here I was, with a dead baby fox, looking out at the forest. I noticed how small its teeth were, and shiny white. The claws were visible, the paw pads looked unused. I began to pick Queen Anne’s Lace blossoms in the garden. Brought out bouquets from inside our cabin home; marigolds, deep red peonies, black dahlias.

Sometimes, dead things scare me. I don’t always believe in the extreme halting that death can create. I expect the dead body to come back to life, to grab me. This may be an effect of growing up in the 80s and watching death-exploitative horror movies. An oversized striped sweater can still unnerve me. I often feel I have rushed my time with dead creatures, maybe people, too. I have crept around them or buried them too soon. A dead chicken will give me shudders for days. Even the chickens that I have loved. And I have always said to myself, but only after the fact, slow down. Things are not actually dead forever. Bodies decompose, memories form. Ghosts are spotted, photos talk to you. Somehow, the once dead recede into the land of Never Were, or they make their way back to you, leading you forward, into the land of Always Was.

That morning, the flowers helped me to slow down. I cut each stem, laying the blooms carefully against the fox’s body. Drank coffee, watched the area past the fence the fox had been seen the evening before. I looked at the inside of the ear. I wondered what it had heard in its fox time. I looked inside the mouth, seeing no reason it should make the sounds it makes. I was content that mystery and veil were present. The girls woke up, made their way to stand next to me, quiet until the questions began. Is this the same fox we saw last night? Why are you decorating it with flowers? What are you going to do with it?

I explained we would do human things with it. Light incense, ask friends over. My boyfriend would come back to paint it. Then we would bury it.

The girls looked at me, suspect. “Why?” my daughter’s friend asked. “What about the vultures?”

Strange. We hadn’t seen vultures above the trees we lived under for about a month now. We had heard the red-shouldered hawk, seen one vulture in the underbrush. But we hadn’t seen the swirling masses that we were used to. Perhaps we just haven’t been looking up as much. These things can be hard to tell. But, perhaps, we need to lay an offering to the sky, to the earth. Bring the birds down. Bring the beetles up. Be less human. Let time move on. Cling less.

Still, I knew my boyfriend would want to paint it. I put the body on ice, dropped it into our evacuation cooler. Brought the girls inside and readied myself for work.

‹ "The Dream Lives of Objects" by Jacqueline Doyle up poetry ›