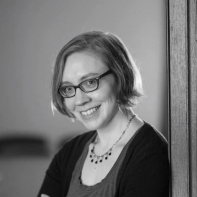 Leah Falk is the author of To Look After and Use (Finishing Line Press, 2019). Her work has appeared in The Kenyon Review, FIELD, Electric Literature, Best New Poets, and elsewhere. She lives in Philadelphia with her husband and daughter, and directs programming at the Writers House at Rutgers University--Camden.

When you get up in the morning, what do you do with last night’s oil?

If an animal has disturbed the garden in the night, what are some curses to ward it off?

If a woman’s birthing time has come, does she delay calling the midwife until she has removed all the clothes from the wardrobe?

They arrive from the cities to interview us, speaking the language correctly but without persuasion, like meat cooked to doneness without salt. They ask us to explain what we believe. They’ve developed notation for our faces: the squint of one eye or a cheek’s curdle, the high forehead that disappears in disbelief. They have studied us from a distance.

If a woman’s birthing time has come, does she mark the time between pains by the number of beggars who pass her door?

What names does a woman give the breath that chases the pains from her body?

During labor, is there a custom to call to the unborn child using the names of the dead?

They ask us to pull on the line that binds the hours, the stages of light. The bit of yarn that marks my place in the day’s weaving: they want to see its knots un-knit, see my fingers fly in reverse. There are so many questions.

What foot do you stand on upon hearing the sirens?

If a child cries out in the night, what amulets do you place before her door?

What blessings are there for the house before everyone else has awakened?

What foods are eaten in the mornings before the last frost?

When leaving the house, is there a custom to turn around five times to ensure the house has not run away?

Once, we might have had answers. Once, the day began dense and low and bloomed like bread.

Upon seeing dust in the afternoon light, is there a custom to let it remain, out of respect for the dead?

While washing the dishes, does one pour out a drop of dishwater as a safeguard against disease?

Now waiting makes a landscape like a held note of warning, a horizonless plain. Before, we lived and dreamed by weather: we consulted our bones and saw rain, snow, the speed of wind. Now, we are meteorologists of emptiness. We take data from this marsh, this parking lot, this subdivision where an ambulance idles. We hold our fingers in the air, calculate which way other people are blowing. An empty forecast is a good forecast.

After washing the hands, is there a custom to wash the hands again?

What is the blessing upon finding an abandoned nest?

The city people go; they will return when they have eaten. In the spaces they’ve left for the answers, my daughter blows a tin flute, pops her lips. In blank spaces that stretch out for centuries, she whorls her hair around her fingers, which cannot help but hold.

Landmarks are the places where the shape

goes dark, the drawing teacher says,
pit of the pepper as it turns in on itself.
The folds where, in growth,
it both craved and shrank from

what would nourish it. He maps
its crumpled pockets, warns us
against strong outlines too early.
On the sonogram, I’m surprised to judge

your movements human,
unmistakable despite limbs
like an upturned beetle’s,
your rodent heart winking

open and shut over Doppler.
Head to torso ratio all wrong,
but some strangeness dissolves
in the instrument that probes

my abdomen, sends your ghost light
unfiltered to my brain.
When the students worry
over shading, how to hold

the pencil, the teacher says technique
is only in service of seeing.
As if it didn’t take technique,
contraction of the whole body,
to see. Here, in the squint
of my uterus, I see double: the body’s

will to live before the brain
is big enough to want. And its twin:
the code to flush this new light
into the chill of space. Both landmarks

rise from the map, telling where the light
is coming from, as chromosomes
come out like stars. For now, for you
to be alive is mere technique, cross-

hatching of cells until they assume
depth, or what the teacher calls
value. Worry nothing
into existence, he says. Keep

a loose light line. A searchlight
scrolling back and forth,
until your object steps
out of its shadows.

‹ A Poem by Kevin Mcllvoy up A Poem by Liz Marlow ›