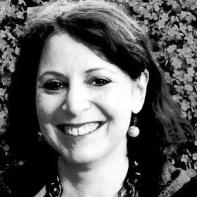 Meg Pokrass is the author of Damn Sure Right, a collection of flash fiction from Press 53. Her work has appeared in over a hundred literary journals. She edits BLIPMAGAZINE (formerly Mississippi Review) and lives near the ocean in San Francisco with her family and seven animals.

I make lists while dad squawks on the phone about female elves in the backyard and how mom used to do it with anyone.

1. man with inner tranquility
2. man who tolerates senile people
3. man with fire in lips
4. Man who has a dog, a well behaved dog, and no kids
5. That kind of man or nothing.

"Someday the elves will spray us when they recognize who we are," I say.

Dad becomes silent and the walls are closing in. I don't know why I am saying the things I say to him, I have never been cruel.

Later, I call him back and tell him about humming and singing, how studies have been done that it leads to healing.

"I don't believe new age crap," he says. Dad doesn't believe in much.

My mom believed in:

1. convertibles and good jobs
2. The word, 'Tada!'
3. Nighttime silence
4. not answering the phone.

When I hang up, the phone re-rings immediately. An abortion rights telemarketer. I tell him to hold on a sec, I need to get something. In the kitchen, a glass of chilled Chablis.

Night brings a walk down the hallway to my bedroom which faces the ocean.