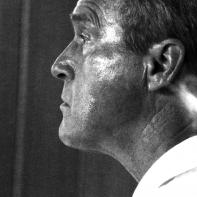 David Huddle is currently Distinguished Visiting Professor of Creative Writing at Hollins University. He taught for 38 years at the University of Vermont and continues to teach at the Bread Loaf School of English. Huddle's work has appeared in The American Scholar, The Hudson Review, Story, Esquire, Harper's, The New Yorker, Poetry, Best American Short Stories, The New York Times Book Review, Shenandoah, The Kenyon Review, and The Georgia Review. Tupelo Press has just published his third novel, Nothing Can Make Me Do This, and in 2012, LSU Press will publish his seventh poetry collection, Black Snake at the Family Reunion.

Superstition Review Editor Christina Arregoces conducted this email interview with David Huddle. She says of the experience, "Mr. Huddle's poetry is not the sort you simply read. It is the sort you fall into. I cannot thank him enough for the amount of time, thought, and depth Mr. Huddle put into answering my questions. I asked him about the authorial source behind his poetic inspiration—and though I certainly was curious about which writers he himself was inspired by, the true reason I asked was because after reading a number of his poems, I realized that Mr. Huddle had instantly become one of mine."

Superstition Review: In your poem entitled “April Saturday, 1960,” you use a very consistent style of couplets throughout the entire poem. Why is that? How do you like to address form in your writing?

David Huddle: I use form as a way of concentrating my attention on the language I'm using—because form makes me try many, many different possibilities of phrasing—and on the vision I'm trying to construct with the words. Formal requirements intensify my attention to the thing I'm trying to make. In “April Saturday, 1960,” the formal requirements I'm using are probably even more rigorous than those you noticed. Yes, I'm using rhymed couplets (though my sense of rhyme is very loose), but I also used a kind of private obstacle course that I sometimes set for myself—making each line come out to exactly the same number of spaces. I work in “Courier New” font, which allots the same amount of space to each letter. So instead of using a meter (like iambic pentameter) or a specific number of beats to a line or even writing a syllabic poem (where each line has the same number of syllables in it), I write it so that each line will come out exactly even on the right hand margin. This is hard to do, and I don't try it often, and I've never done it in a poem as long as “April Saturday.” But once you get into it, it's rewarding, and when you finish the poem, it's exhilarating, because feel like you succeeded in doing something that was extremely difficult.

SR: You've written several books of poetry. How do you keep finding original material to write about? What inspires you?

DH: I write every day—and like you and everybody else—I'm a new person every day. Often my problem is that I have many more things to write about than I can manage in any single morning. Nowadays I take a two-mile walk every day around noon, and then I take another two-mile walk just before sunset. On those walks, I see so many creatures and landscapes and plants, and I do so much thinking, that I come back to the computer with vast amounts of material in my head. This wasn't always the case with me—before I had children, I went for long periods of time without writing, but once I had kids in the house, I started getting up early in the morning and going to my writing desk. (Because that's when quiet time is available when there are young children the family.) It's a habit that's very useful for a writer, getting up and doing some writing first thing in your day. You can get a lot accomplished that way. I also claim that I owe a great deal of my writing success to coffee. If you write at the same time and in the same place every day with your first couple of cups of coffee with you as you're working, then “going to work” is a very pleasant occasion for you. Instead of being reluctant to start writing, you're eager to get started. It's the best part of your day.

SR: Your poem entitled “Delivering the Times, 1952-1955” reads like a series of childhood memories. Have you incorporated aspects of your own childhood into this poem? How often do you draw from your own past?

SR: In your poem entitled “Brief Essay on Pain,” you include religious references. In what ways does religion make its way into your writing?

DH: I'm not a deliberately allusive or religious writer, but I did grow up as an Episcopalian, and of course the Bible was very much a part of my early education. That being said, I'd argue that the religious aspect of that poem came about very naturally. The pain in my palm while carrying in groceries was an actual experience and that pain was what triggered the poem in the first place. And at the time I wrote it, the Mel Gibson movie The Passion of Christ was being written about and discussed, and so even though I hadn't seen the movie, I'd encountered the word torture used as a way to describe what Christ went through. So when I was moving toward the conclusion of that poem that began with pain in my palm and that discussed the random pains and aches that everyone experiences, those last lines came to me—“The New Testament / is basically a story about torture.” That was the news—or the revelation the poem had to offer me.

SR: Describe how your composing process differs when you're writing a shorter poem versus a longer poem such as “Is There Anybody Here I Can Say Goodbye To?”

DH: That poem is one that I think of as being kind of “a documentary.” It has a sibling called “Men's Sauna” that's on the Internet (http://howapoemhappens.blogspot.com/2010/09/david-huddle.html), and both of them are simply direct accounts of personal experience. They're like short stories or personal essays, and because they're narratives, I'm more concerned with simply “telling the story”—which means that I give less attention to “the poetry” of the poem. With shorter poems, the poetry of the poem can be the whole project.

SR: In several of your poems, you create characters and name them, such as “Ray” in the poem “Is There Anybody Here I Can Say Goodbye To?” How do you develop characters and are they ever inspired by real people?

DH: They're almost always real people. Ray—bless his heart—was a real person, though not one who was likely to read my poem.

SR: In your poem entitled “Banyan,” you use several different beautiful images to describe the speaker's potential tattoos. What inspired these images?

DH: “Inspire” is not a word that really applies to my writing, though most of my writing comes about because of an experience that I've had on my mind for a while and that comes to me when I sit down to write. “Banyan” probably came out the way it did, because when my daughter Molly was in high school, she and I used to discuss getting a tattoo, mostly as a way to tease her mother who was vigorously opposed to Molly doing such a thing. But Molly and I liked discussing what our tattoo would be and where we have it placed on our bodies when we did get it. (Neither of us has yet gotten a tattoo.) So that was part of what brought the poem into being. The other part of it is that in that time I was teaching a summer school course in autobiographical writing, and in one of the classes, we got to talking about tattoos. So a bright idea came to me—“Let's all write tattoo poems and bring them to class tomorrow!” It seemed to me a wonderful idea (because I'd been thinking about tattoos for months), but as it turned out I think I might have been the only person who brought a tattoo poem to class the next day. I should also say that there's a Flannery O'Connor short story that I really love, called “Parker's Back”—about a guy who has “the Byzantine Christ” tattooed on his back—and that story “informed” my poem.

SR: In your poem entitled “The Poem, The Snow, Jane Goodall, the Vase of Daffodils,” you beautifully meld several different subjects and images into one cohesive poem. What is the connection between these subjects? How did you come to connect them?

DH: The connection among those subjects is that they all presented themselves to me one morning when I sat down to write: It was snowing that morning—one of those heavy wet snows that come to Vermont in the spring. My wife had purchased a great bouquet daffodils that she'd placed in the living room near the sofa where I usually sit to do my writing. And I'd recently seen a documentary about Jane Goodall on TV, a film that deeply disturbed me. So I deliberately tried to structure a poem that would somehow “embrace” all those elements.

SR: Which authors do you go to for inspiration? Which new writers impress you?

DH: Again, “inspiration” is not the word I'd choose here. I read for companionship as much as anything else. And for fun. Traditional poets that have meant a lot to me are Edwin Arlington Robinson, Robert Frost, William Carlos Williams, and Theodore Roethke. Newer poets who also mean a lot to me are Marie Howe, Bob Hicok, Tony Hoagland, Stephen Dunn, Steve Scafidi, and Dorianne Laux.

DH: I've just managed to complete an early draft of a novel in about two months. I've never had such an experience before—I usually have to write novels in pieces and then try to figure out how to put them together, a process that takes at least a couple of years. This time I started at the beginning and wrote straight through to the ending. I actually started doing two-a-day writing sessions, which I managed by having an afternoon cup of coffee. (Maybe I should confess that coffee does for me what inspiration must do for other writers.) I'm sure that with this novel I have many more months of work ahead of me before it will even have a chance of becoming a real book—but that's work I'm looking forward to.