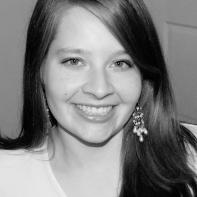 Ashley Caveda is an MFA candidate at The Ohio State University. Born and raised in Indiana, she graduated from Butler University with a BA in English and Spanish. Currently, she's working on a memoir that explores her life and the lives of her four siblings after a car accident in 1990 left her and her younger brother paralyzed.

My father dumped his long-term girlfriend, Cecilia, the same day he asked Rose to marry him, and just two weeks before we left for Spain. I had only met Rose once. She was a gift from God, he insisted, tears in his eyes. His second chance. My brothers said it was bullshit-bound to fail-another example of how our father jumped from thing to thing with steadfast words from a fleeting heart. Our mother said that it was just like him to pull a stunt like this.

Most of me thought that what he'd done was crazy, a bad idea. But another part of me believed that God, as he did with water in wine casks, could make this into something good. My sister said it was ridiculous for me to think such a thing. He was a liar and a cheat, and that's all he'd ever be. But in my heart, I didn't stop praying.

A native of Cuba, my father had decided to spend five weeks in Spain near the beginning of my semester abroad. Now Rose would join him three weeks in for their honeymoon. At the airport, she gave him a stack of love letters tied together with a long red ribbon, one for every day they were to be apart.

The last weekend of their extended holiday, the three of us were driving up the winding road that leads to the Lagos de Covadonga, two lakes formed by the melting and retreating of enormous blocks of ice nearly 10,000 years ago and located in the Picos de Europa mountain range. The traffic was stop-and-go, halted by dozens of grazing cows unconcerned with road etiquette. They mooed and chewed, and the bells around their necks rattled like wind chimes. Just beyond the green landscape, punctuated by jagged, chalk-like rocks and the smell of rain in September, two rainbows hung, one just above the other.

For the first time in my life, they weren't far away, as they always are-behind flowering branches, visible only when you turn just so. They were next to the right window of my father's rental car—Pepe Car we called it, for the cursive company name scrawled on the side. The rainbows were suspended in the mist, just past the road and beyond the drop of the mountain's edge. Los arco iris. I could see right over the top of them. I knew the silly legend that if you found the end of a rainbow, you'd also find a leprechaun, counting his gold like a miser, but I had no idea that you could find the top of a rainbow, as though it were a physical thing, a structure with form. But what struck me most was an unexpected darkness between the rainbows, like something ominous bookended by hope.

The cows passed both arcs as though they'd never seen anything less fantastic. They passed them without noticing like my father passed me outside of Bar Niño on Calle Mayor, his arm around a Spanish woman, whispering into her hair, those first three weeks without Rose.

I saw him walking by and started to call out when my host father put his hand on my arm to stop me. He saw the woman before I did. They walked right by us, so close that if we'd both stretched, our fingers could have touched. And though I wanted to hide this image someplace so deep it wouldn't be true anymore, when my host father's friends asked me if that was my father's new wife, I couldn't lie. That's not his wife. Mi padre es un hombre malo. My father is a bad man.

Before going to Spain, I was the only one who wanted to believe something good of him. That he wasn't just a liar and a cheat who left his wife for another woman, who left her for another woman, and who left her for Rose, and who knows how many secret ones between. They say the definition of an insane person is someone who does the same thing over and over again, yet expects a different result, but perhaps the better word for that person is fool.

Sitting in that car in the mountains of Spain, I didn't know that the dark area between the rainbows was called Alexander's Band. The only thing I remembered was Noah, in his boat, waiting for the waters to recede. And then God's promise taking this fragile, nearly tangible form.

“Wow,” my father said, after leaning over Rose to take dozens of photos of the phenomenon through Pepe Car's passenger-side window. “Jehovah Jireh, our provider. We're so foolish, but He gives us exactly what we need. It brings me to my knees sometimes.”

And I watched as he took Rose's hand, his voice catching with emotion I'd heard before, memorized even. But Rose smiled at him, turning her back to the rainbows and Alexander's Band. I learned later that the shadow was caused by the angles separating them, another illusion. In reality, there was light there, between them, but it could never reach us.