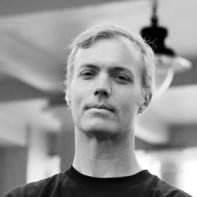 Patrick Madden is the author of Quotidiana, winner of book of the year awards from Independent Publisher and ForeWord Reviews, and finalist for the PEN Center USA Literary Award in Creative Nonfiction. His essays have been recently been published in Fourth Genre, Iowa Review, Hotel Amerika, and the Normal School, and they've been republished in the Best American Spiritual Writing and Best Creative Nonfiction anthologies. He teaches in the MFA programs at Brigham Young University and Vermont College and curates an online anthology of classical essays at www.quotidiana.org.

The other day as we left the doctor's office, my seven-year-old daughter, Adriana, brushed past me, pronouncing to the air: “I've never seen the top of my head.” She kept on her way to the car, without pause, without a sidelong glance to find an answer or a response. I smiled and caught the essay she had given me.

I suspect that I have seen the top of my head, in a mirror or in a photograph, but I have no distinct memory of such a thing. Today, if I lean my head forward and roll my eyes upward, I can see some of the top of my head in the glass in front of me, but I can't see all of it. I wouldn't want to. Some valiant few hairs are holding on up there, but I lament their lost brothers, no matter that God has them accounted for. I count it a blessing that I am 6'5"; most people look up to instead of down on me. Atop Adriana's brother's head we find a zig-zag scar, remnant of an operation he underwent at two months to remove a prematurely fused section of his skull. Whenever he gets a haircut his teachers ask Karina and me what happened. Or they make cracks about the barber's slipping clippers.

In any case, essays such as this are best accomplished “off the top of one's head,” without too much planning or proving, like the acrobatics Adriana and I perform some evenings, after Jeopardy!: I lie on the floor, she comes running, I grab her shoulders, kick up her legs; we twist as she flies overhead, a mess of loose hair and giggles, yet she is grace itself, from launch to landing, again and again until bedtime, when I tuck her in with a kiss on the top of her head.

When Thomas Higginson asked Emily Dickinson to define poetry, she wrote, “If I feel physically as if the top of my head were taken off, I know that is poetry.” Emily, I am a father. I feel that every single day.

I've been noticing little things here and there, evidences of what must be brain short circuits. The other day I couldn't speak for a few moments; the sounds from my mouth were gibberish. Just now, revising a syllabus to reflect new university course-numbers, I wanted to change the 115 in English 115 to 150H. I typed “1foH.” Something between “me” and my fingers must have translated the 5 into “five” and the 0 into “o” (not uncommon), I reasoned. In any case, I hope this is “natural,” or that it takes a long time setting.

At least my mind can still discover. I was scraphazarding information on Paisley Rekdal, who is to give a reading at my university tomorrow, when I discovered the title of her poem “Feel Like a Little Trepanning Today?” I wasn't sure. I might, but I honestly didn't know what that was. Life intervened before I could get to a dictionary, but soon I was reading about the Beatles' cockamamie plan to buy an Aegean island where they could build four houses connected by underground tunnels to a giant recording studio. Their Greek suitor, Alex Mardas, “also encouraged a practice he called 'trepanning,' which involved having a hole drilled in one's head. 'Magic Alex said that if we had it done our inner third eye would be able to see, and we'd get cosmic instantly.'” More likely, such a procedure would alleviate the pressures of overanalysis, perpetual attention, melancholy, cerebral distress.

In any case, I want to recall “Tomorrow Never Knows” or some other mystical Beatles tune to shed light on my memories, enlightenments, and fears, but my inner dial is stuck on Carly Simon, trying not to worry about the future, but singing anyway, “Anticipation, anticipa-a-tion is making me crazy.” No? Not “crazy”? I always thought it was “crazy.”

I've got half a Hilshire Farms smoked sausage in the frying pan. My motivation is hunger and something like a metaphorical hunger for a memory of the taste. That would be enough, but as I was slicing the beef stick, I was returned to the first time I ever ate such a thing, at the local FoodTown, when I was, let's say, eleven years old. A young woman was offering free samples in a back corner of the store, somewhere near the open refrigerated sections with the cheeses, meats, and eggs, and John Hickey, my friend, and I were eating as much as we could. I have never been able to recapture the exact magic of that moment, my first taste of the stuff. My smoked sausage slices always come out a little bit burned on the edges, a little too concaved from the cooking. But I try anyway, whenever I find it on sale. The woman that day was set up on a Formica table with spindly metal legs, with a small, square electric griddle coated in aluminum foil. In front of her, she set out the pieces of meat on a paper towel on a plate, with toothpicks stuck in them to keep things clean. I don't really remember all of this, or I can't be sure I do, but this is how the scene reconstitutes. What I remember most about that day, besides the delicious taste of the sausage slices, was what she said to John and me when we came back for our fourth or fifth slice: “You boys are eating up all of my profits.” I can still recreate some semblance of the swing of her voice.

[Back in my kitchen, in my present, I have saved the sausages from the frying pan; now it is time to send them into my mouth! Into my head swishes the unfortunately memorable Roger Daltrey song “After the Fire,” then my mind avoids the obvious detour to “Der Kommisar,” sung by the band After the Fire, and is off to the recent Who reunion tour, which catapults me to their first of many farewell tours, in 1982, which I watched on HBO at John Hickey's house with my father's portable tape recorder propped in front of the tiny television speaker, recording the tinny ghost of what I thought would be a last chance.]

This was the first time I had heard that phrase, “eating up all my profits.” I knew what profits were, but she was giving the sausage away. It seems strange to me that I should remember such an inanity, even more so because I didn't really understand what she meant. But the phrase stuck, stayed intact, verbatim, somewhere in my mind amidst the millions of other things people have said to me, sometimes people who mean a great deal to me, whom I love, yet whose sayings have gone utterly lost from my brain. How I would love to remember the first words my wife ever said to me, or her exact phrasing when she said yes, or my grandfather's last coherent sentences before he descended into darkness. Instead, I have “You boys are eating up all of my profits,” from a young woman I never knew and could not recognize if I crossed her again.

Friedrich Nietzsche said, “Only that which never ceases to hurt stays in the memory.” That sounds nice, has the right rhythm to reach for assertion and assurance, tastes pretty good on the tongue or in the brain, but, I'm sorry, Friedrich, what never ceases to hurt is what's gone.

‹ "Lifeboat" by Louise Desalvo up Poetry ›