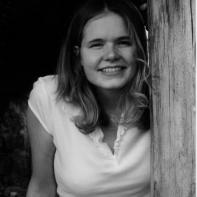 Sarah Wangler's work has been published or is forthcoming in Best New Poets 2010, Cream City Review, FIELD, Moon City Review, Superstition Review Issue 4, The Tusculum Review, and elsewhere. Her manuscript, Bawl Ass, was recently named as a semi-finalist in the 2011 St. Lawrence Book Award. She has been an editorial assistant at the Cimarron Review and Passages North and holds graduate degrees from Oklahoma State University and Northern Michigan University.

Marianne walks naked through the river
toward her daughter: both of them are me.
I yell at myself. Brush that ratty hair.
I want to paint the sharpest edged sword
with crushed goldenrod ink. Our mikado
hair is tangled in the mustard. My heels
trek through mud and mollusks. Isn't pink
a trout that is already dead? Doesn't the
fly-fisher spindle hundred-pound test, reel?
When you burn the witch, hands tied
to a stake, devil's child will break her water
and put out the flames. No sex is left
in that violence, no pricks can find the witch's
teat—what else is any witches teat but
a clitoris—a lady in a canoe who will
paddle away if threatened with drowning?

The hand that tended the garden where we
planted the fish era la otra mano, entonces,

también. It was her other hand then, too.
The mother Marianne was, the mother I was,
gave the daughter we were all the fishheads
to plant and the blueberry bushes grew fisheyes
instead of berries and Marianne plucked
tantas son que la planta morirá de este mal—
enough that the plant will die of us, of this
disease. The plant will kill itself. I picked enough
so that it will sprout flowers too large for the stem
to hold and the plant will die. I did not see
what the other hand did because I was busy.
I planted the fish and I was not a witch. I have
wanted to laugh. Tengo deseos de reír, but
I have laughed. I have wanted to
want to laugh,
I have wanted
to want.